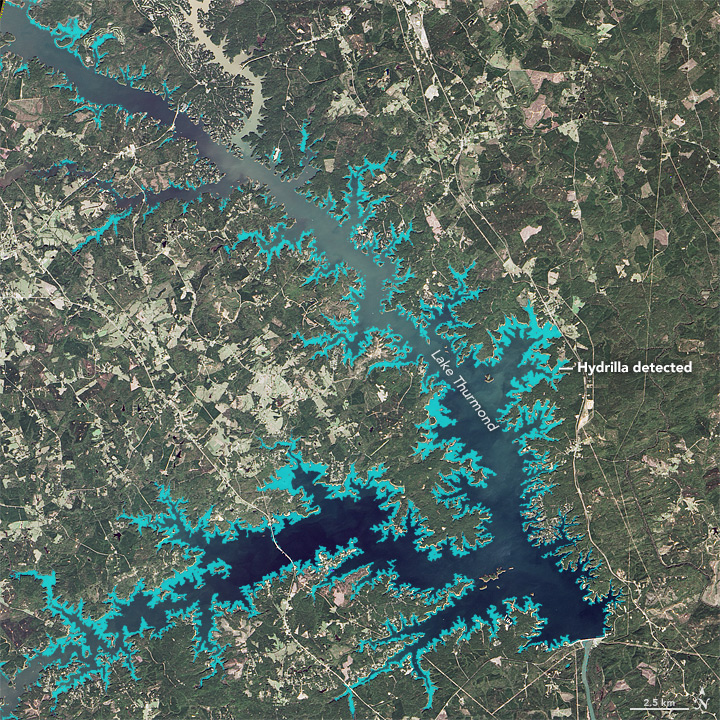 Around Lake Thurmond, a large reservoir that straddles Georgia and South Carolina, something is not right with the birds. The lake is full of vegetation—particularly an invasive aquatic plant known as Hydrilla verticillata—and the area is full of birds that are distressed or dying.

Scientists have deduced that the birds are consuming a toxic cyanobacteria that lives on Hydrilla verticillata. The toxin causes a neurodegenerative disease and ultimately death in the water birds that ingest it. Eagles don’t eat the plants, but they do prey on other birds. And many eagles have been found dead in the vicinity of Lake Thurmond.

Hydrilla is tenacious. It grows in fresh water on every continent except Antarctica, and it has been found in at least 30 states in the U.S. The plant tolerates a wide range of temperature, nutrient, salinity, and turbidity conditions, and it can grow as fast as one inch per day. In Lake Thurmond, the plant can be found in 11,200 of the lake’s 71,000 acres. The U.S. Army Corps of Engineers has used herbicides to temporarily control the plant’s growth at boat ramps and swimming areas, but the impact on birds has encouraged investigation into treatments that would be more widespread and long-term.

To help lake managers know where to focus management efforts, researchers at the University of Georgia developed a new way to assess the distribution of Hydrilla across the lake. The project was part of NASA’s DEVELOP program, in which recent college graduates and early career professionals use NASA satellite observations to address an environmental or public policy issue. On October 18, 2015, the Operation Land Imager on the Landsat 8 satellite acquired an image (above) of Lake Thurmond. Blue overlays on the Landsat image show the extent of Hydrilla that month. The map is based on a model developed by the team, derived from Landsat 8 imagery and ground-based measurements. 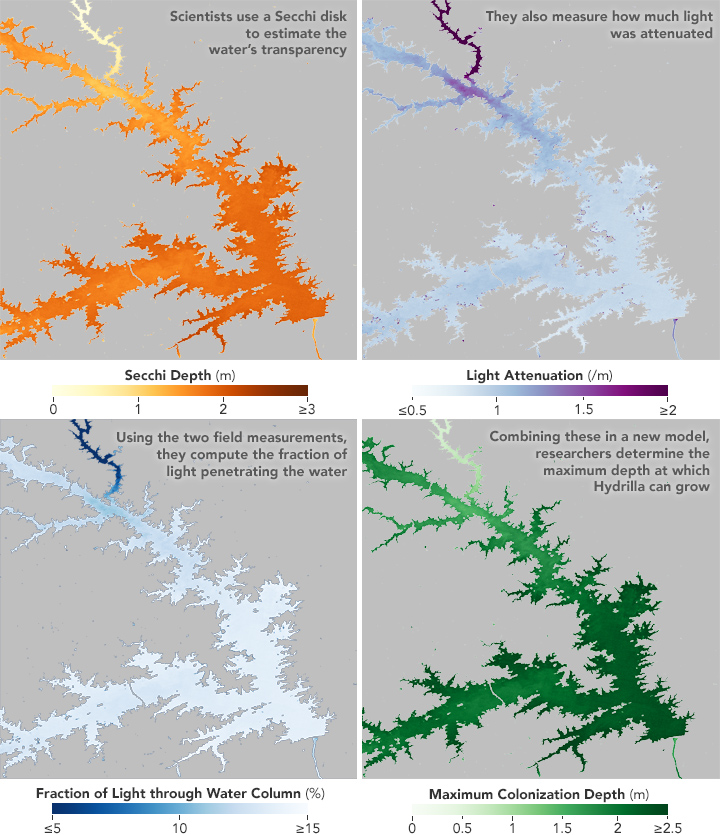 Hydrilla grows best under specific water and light conditions. The model accounts for those parameters, represented in this series of four images. The most important factor is the water’s transparency (top left). By lowering a Secchi disk into the water and measuring the depth at which it is no longer visible, scientists can estimate the water’s transparency. In this map, the darkest orange areas are transparent and yellow areas are turbid (murky). Highly transparent regions are more suitable for Hydrilla.

From the transparency measurement, the team derived other parameters, including the gradual loss of light at depth, or “light attenuation” (top-right), the percentage of light penetrating the column of water (bottom-left), and the maximum depth at which Hydrilla colonize (bottom-right). The new model integrates all of these parameters to determine the ideal locations for Hydrilla growth. According to the DEVELOP team, the model will “act as the foundation for later models intending to predict future locations in need of Hydrilla management.”