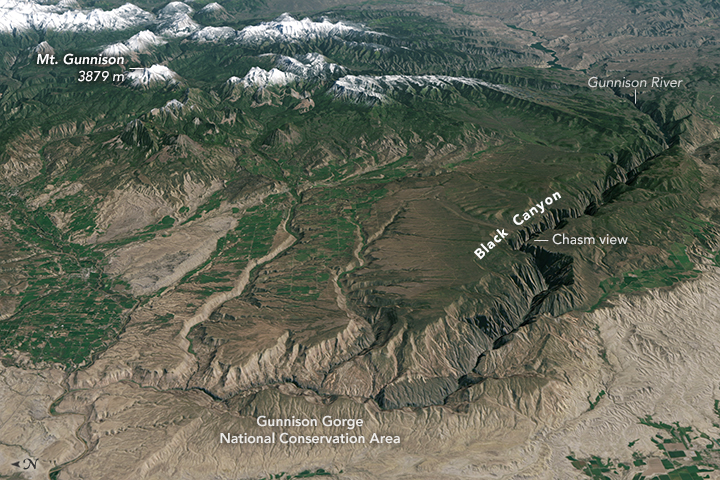 The River that Trapped Itself

Black Canyon of the Gunnison National Park owes its name to its deep, dark crevices. The Gunnison River sculpted these walls, cutting thousands of feet into the bedrock. Much of the time, the winding waters at the bottom of the gorge are submerged in shadow.

Even from space, this canyon in Colorado commands attention. The Operational Land Imager (OLI) on the Landsat 8 satellite acquired a natural-color image of the park on September 24, 2013. That image was draped over an ASTER-derived Global Digital Elevation Model to show the area’s topography. At their tallest, the canyon’s near-vertical walls plummet roughly 2,425 feet (740 meters).

The Gunnison River was already cutting into the stone during the Pleistocene era, when melting glaciers strengthened the river’s current. Running hard, the river picked up sand, gravel, and boulders, “efficient tools for canyon-cutting,” according to the Roadside Geology of Colorado. In a process called stream superimposition, the river scoured its way through softer lava and ash, sedimentary rocks and, finally, the hard Precambrian rock below. Today the Gunnison is forced to stay on this beaten path, unable to leave the valley because it is trapped between towering walls of bedrock.

The same geological features that give this landscape jagged edges also test the mettle of hikers who try to climb the inner canyon. For instance, the Warner Route, one of the park’s lengthier trails, spans a vertical drop of roughly 2,700 feet (830 meters)—nearly twice the height of the Empire State Building. The National Park Service website warns: “hikers are expected to find their own way and to be prepared for self-rescue.”

Other visitors come to see the canyon after the Sun sets. The park’s relatively remote location makes it an ideal spot to view stars. In 2015, the Black Canyon became an International Dark Skies Park. 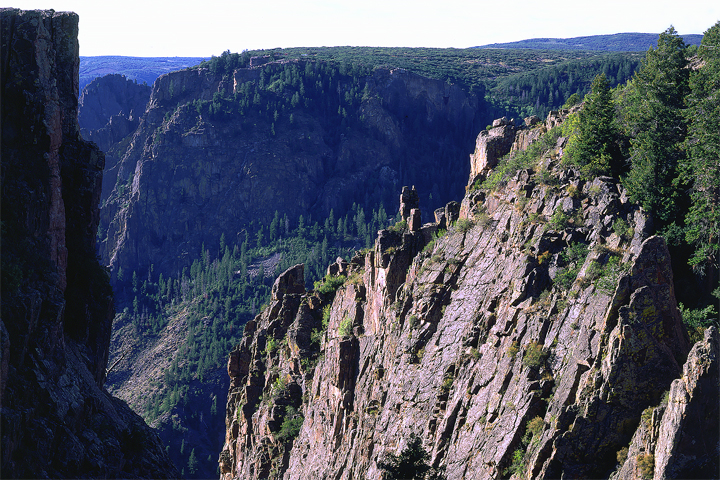