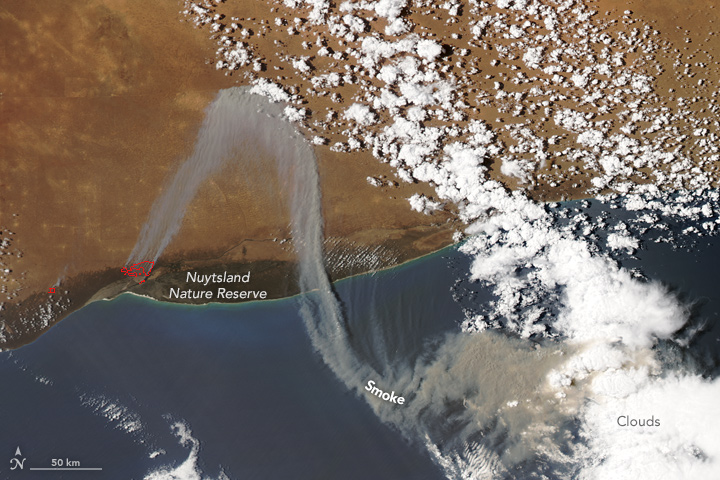 In December 2016, shifting winds pushed smoke from a bushfire on the south coast of Western Australia into the shape of the letter Z. The Moderate Resolution Imaging Spectroradiometer (MODIS) on NASA’s Aqua satellite captured this natural-color image of the zigzagging smoke plume on the afternoon of December 7, 2016. Red outlines indicate hot spots where the sensor detected unusually warm surface temperatures associated with fires.

The Cocklebiddy fire began at the Nuytsland Nature Reserve before spreading across 12,000 hectares (nearly 30,000 acres), the Australian news outlet 9News reported. Australian officials issued an alert and closed nearby Eyre Highway to traffic, according to Perth Now. The alert level has since been downgraded, but the fire continues to burn.

The National Oceanic and Atmospheric Administration’s Regional and Mesoscale Meteorology Branch posted a clip showing the development of the smoke plume as their December 7 Himawari-8 Loop of the Day. Himawari-8 is a geostationary satellite managed by the Japanese Meteorological Agency. In the clip, a blast of smoke pushes out toward the ocean at first, before changing course and heading inland. The change was likely due to a shift in the lower-level winds.

On December 7, 2016, the Operational Land Imager (OLI) on the Landsat 8 satellite acquired the second image, which shows smoke and pyrocumulus clouds rising from the fire. 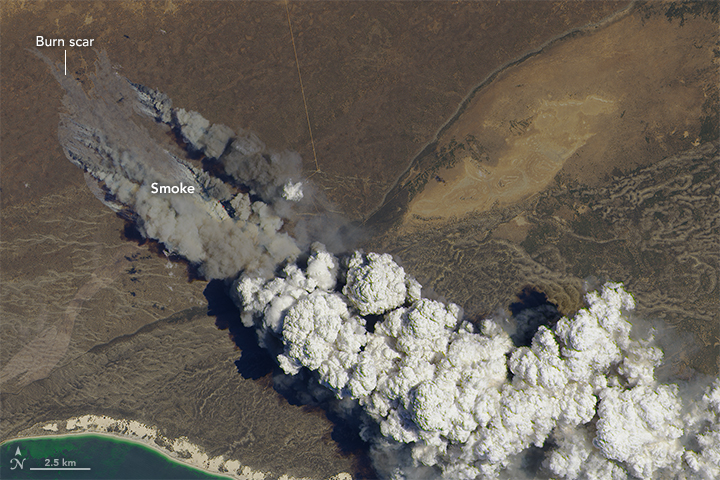