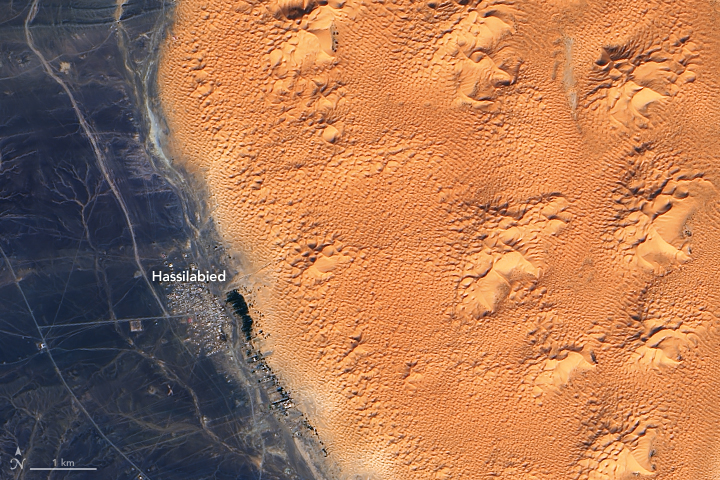 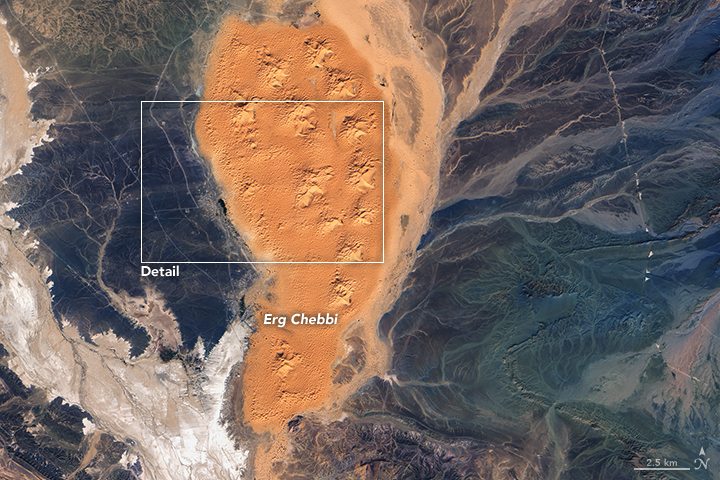 The Shallow Aquifers of Erg Chebbi

About a dozen large star- or pyramid-shaped dunes lie within Erg Chebbi, a dune field in southeastern Morocco. Many of these bright orange dunes soar higher than150 meters (490 feet)—making them some of the tallest dunes in the country.

The windblown piles of sand are so dry and porous that they support few plants. Yet, water is surprisingly close. A hard, impervious layer of rock—mainly schist—lies directly beneath the dunes and blocks water from seeping deep into the ground.

This leaves a shallow water table that communities along the border of the sand sea have relied upon for decades. Indeed, an underground network of qanats (khettaras in Moroccan) naturally moves water westward down the slope of the dunes toward towns on the edge of dune field such as Hassilabied.

The effects of the water are clear in this satellite image. (The lower image shows the entire dune field; the upper image shows part of the dune field and the town of Hassilabied in more detail.) The Operational Land Imager (OLI) on the Landsat 8 satellite acquired the image on October 31, 2016.

A line of green vegetation just east of Hassilabied runs diagonally along the edge of the dune field where underground qanat channels emerge at the surface. A grove of trees, likely date palms, lies at the northernmost section of the line. The gray landscape to the west of the dunes is desert pavement, a gravel-rich surface where most sand has been removed by the wind.

While the dunes themselves are generally uninhabited, tourists and Berber people sometimes camp amidst them. Note the small settlement located to the east of a dune in the upper part of the second image.