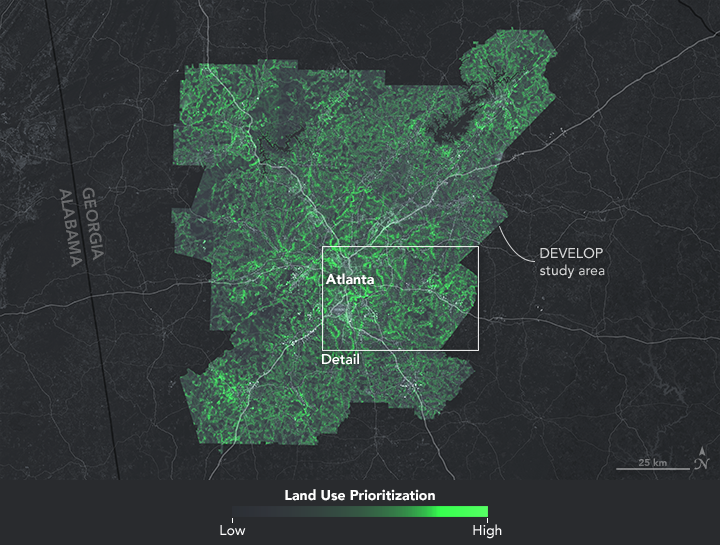 It’s no secret that Atlanta’s green space has long been turning gray. Parking lots and houses have sprung up in recent decades, with pavement replacing forested areas. In a city with already expensive wastewater treatment, all of this development has left even fewer opportunities for woodlands to contain and filter rainfall. But now, a coalition of researchers and conservationists is taking advantage of existing forests to bolster Atlanta’s natural defenses.

Cameron and his team created a land use prioritization map, which shows important conservation areas in Atlanta based on criteria such as proximity to waterways and existing green infrastructure. Using this map, groups can focus their conservation efforts on spots with the most potential to improve local water quality. The Nature Conservancy, for instance, hopes to preserve more trees, which can filter untreated stormwater that flows over impervious surfaces (paved roads and concrete sidewalks). More forests, the idea goes, will soak up some of the wastewater currently inundating the city’s waterways and will improve local water quality.

“When we started thinking about doing conservation in Atlanta, we had no idea where to focus because it’s such a huge metropolitan area,” said Sara Gottlieb, a conservation planner at The Nature Conservancy’s Georgia Chapter. “So using DEVELOP’s analysis to narrow down where we and our partners can do our work was really essential.”

The group is one of many working to address wastewater and tree canopy issues, and Gottlieb hopes the DEVELOP data can help find areas where preservation efforts would be most productive. For instance, the project identified one area in East Atlanta (below) that has seen rapid demographic shifts and rising property values in recent years. 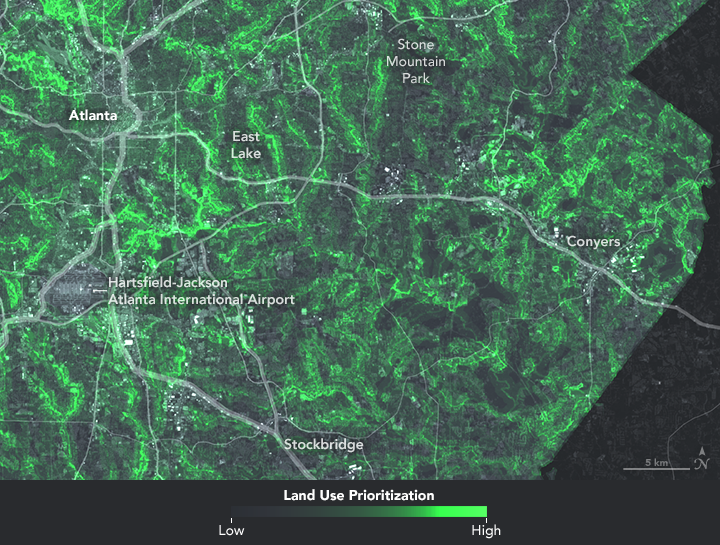 “That area really piqued our interest,” said Gottlieb. “There’s lots of existing forest parcels in county hands or private hands that could so easily be torn down and turned into development.” She said The Nature Conservancy hopes to acquire or set aside these green resources, sparing them from becoming future development.

Compared to western Atlanta, the site of the Chattahoochee Watershed, the eastern part of the city does not receive as much attention from conservation groups, said Myriam Dormer, an outreach and urban conservation associate for The Nature Conservancy. By focusing on areas like the South River Watershed, groups can help clean city water before it trickles downstream and into sensitive ecosystems. “Any improvements we make along that corridor as it flows out of city of Atlanta and through backyards of Dekalb County will make a big difference.”

This project was funded by NASA’s DEVELOP program, which uses Earth observations to address environmental and public policy issues.