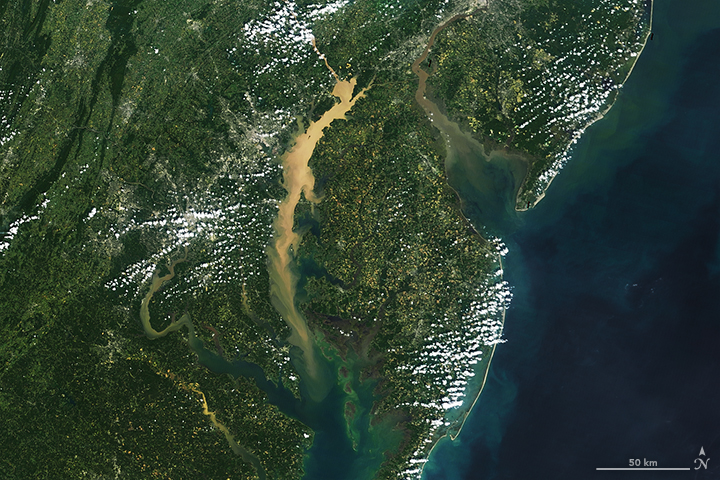 Studying Chesapeake Bay from Above

There are many routes that a drop of rain can follow after it falls on the Chesapeake Bay watershed and makes its way toward the Atlantic Ocean. Whether that water passes forests, suburban lawns, farmland, or city pavement, two things are certain. First, it will slosh around with dissolved nitrogen, phosphorus, and sediment. Second, it will host phytoplankton—free-floating microscopic, plant-like organisms that thrive in fresh, salt, and brackish water. The strip of images below shows a few common types of phytoplankton.

Nitrogen, phosphorus, and sediment are the chief reason why the Bay’s water has grown so cloudy in recent decades. The concentration of each substance rose in the 1950s, 60s, and 70s due to intensifying suburban development and changing farming practices. In modest amounts, nitrogen, phosphorus, and the hundreds of species of phytoplankton they fuel are harmless. In fact, they play an important role in the natural functioning of the ecosystem. But as these substances grew more common in the Bay, scientists began to notice that algal blooms, oxygen-deprived habitat, and dead zones were becoming more frequent and severe.

While some algae blooms are subtle, the right mix of environmental conditions and species can turn vast stretches of water green, brown, or red. Currents, tides, and eddies churn those tendrils of color into spirals of algae. Sharp gradients in water salinity and temperature add to the kaleidoscopic appearance of the water. 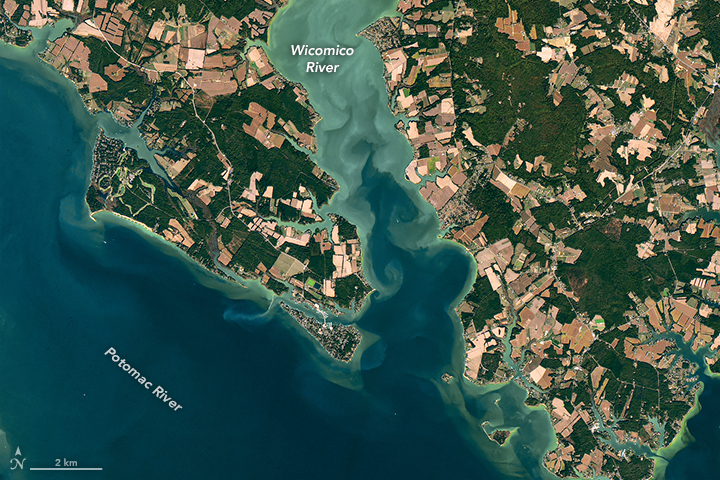 The effects of algae blooms are more than visually stunning. A few species release toxins that may lead to fish kills and other ecosystem damage. The aerial photograph below, taken by Kimberly Reece of the Virginia Institute of Marine Science, shows tendrils of an algae bloom that discolored the water in the lower Chesapeake Bay on July 31, 2012.

However, even blooms that do not release toxins can have major consequences. When weather and water conditions shift—such as a change in winds, cloudiness, or temperature—huge numbers of phytoplankton die off, sink to the bottom of the Bay, and begin to decompose. Bacteria then suck oxygen from the water during the decomposition process, leaving waters severely depleted in dissolved oxygen. For many types of marine life, trying to live in this hypoxic water is like a human being trying to breathe on the Moon.

In the 1960s and 1970s, it became clear to everyone from fishermen to recreational water users to environmentalists that the dead zones were disrupting Bay ecosystems. Populations of certain fish, crabs, and other marine species were plummeting. Sea grasses that once thrived in the Chesapeake’s shallow waters were withering away due to the influx of sediment and algae.

In an attempt to revive the Bay, a consortium of state and federal agencies, non-profits, and private sector groups established the Chesapeake Bay Program. Since 1985, the group has worked to monitor the clarity and quality of water, to track the size and scope of phytoplankton blooms, and to study the conditions surrounding the dead zones that emerge each year.

Scientists face a considerable challenge studying blooms and dead zones because both are ephemeral and fast-changing. Collecting water samples from boats is the traditional way of studying water chemistry and quality. Nothing can match in situ measurements for the fine detail they provide about dissolved oxygen levels, specific pollutants, or phytoplankton species at a given location. 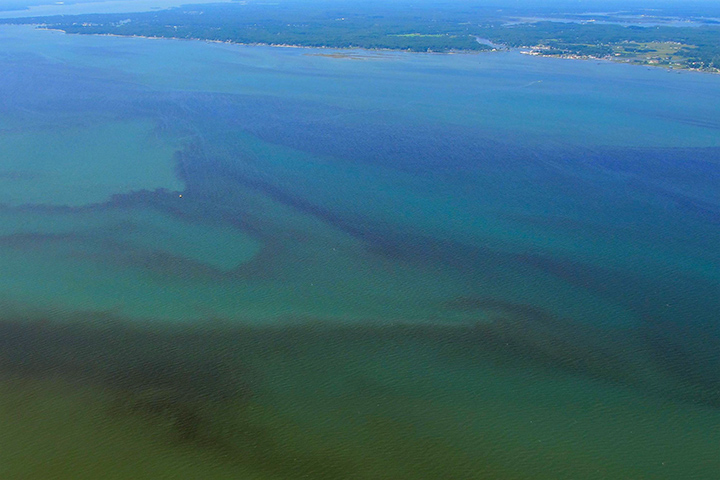 But such measurements cannot capture the big picture. It is difficult to discern bay-wide trends or large-scale patterns from a few data points spread out over time and area, said Larry Harding, a marine biologist at the University of California, Los Angeles. Ship surveys can easily miss a bloom unless they happen to sample the right area; such expeditions also tend to be slow and costly. “Are phytoplankton blooms getting larger or smaller over time? What are the main factors that control the intensity of blooms across the Bay?” said Harding. “These are the types of questions that airplanes and satellites can help answer.”

For 25 years, Harding led the Chesapeake Bay Remote Sensing Program, which flew light aircraft over the Bay dozens of times per year to collect observations of phytoplankton abundance. Harding and colleagues have put together a unique dataset that has filled in key gaps in the in situ record, detailing how phytoplankton populations vary throughout the year and how these communities respond to changes in weather conditions.

Rainfall patterns, for instance, have a major impact on levels of phytoplankton. Wetter years with high flow and sediment loads from the Susquehanna River support larger algal blooms, while dry years tend to reduce them. (The image at the top of this story shows high sediment loads in the Susquehanna and Bay in September 2011, after Tropical Storm Lee doused the Mid-Atlantic.) He also found evidence that reductions in the phosphorus and nitrogen entering the Bay are starting to have an impact on phytoplankton activity.

“The upper Bay, north of the Bay Bridge, has responded with decreased chlorophyll-a, a measure of phytoplankton abundance,” said Harding, “while other regions have not changed and await more aggressive reductions in nitrogen loading to show improvement of water quality.”

While Harding has surveyed with airplanes, scientists at NASA Goddard Space Flight Center, the National Oceanic and Atmospheric Administration (NOAA), the University of Maryland, and other institutions have been scrutinizing data from several satellite instruments. For instance, the Sea-Viewing Wide Field-of-View Sensor (SeaWiFS) flew from 1997-2010 and built an extensive record of chlorophyll measurements around the world. Since 2000, scientists also have made use of daily observations collected by the Moderate Resolution Imaging Spectroradiometer (MODIS) on NASA’s Terra and Aqua satellites. Higher resolution sensors, such as the Operational Land Imager (OLI) on Landsat 8, can see more details, but they only pass over the Bay once every 16 days. 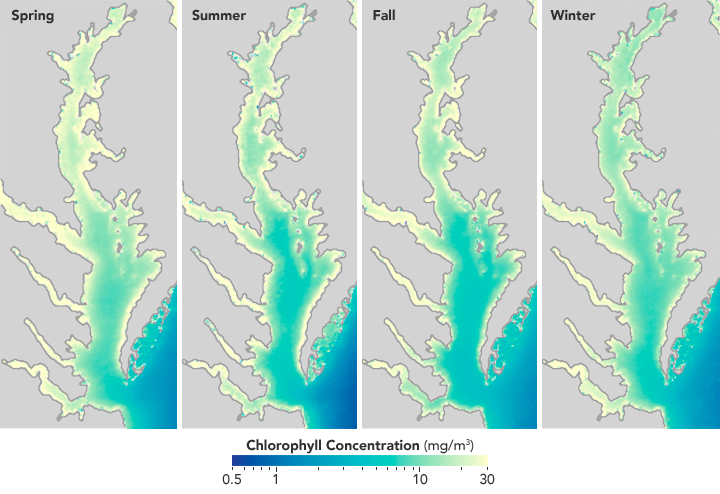 “We have found the satellites, especially SeaWiFS, to be quite good at picking up the seasonal cycles, year-to-year variability, and trends in phytoplankton activity that we see in the in situ and airplane data, especially in the lower bay, where the satellite measurements are most accurate ” said Jeremy Werdell, an oceanographer based at NASA Goddard.

NOAA’s SeungHyun Son, for instance, used observations from MODIS to track seasonal trends in chlorophyll levels. The map above shows how levels of chlorophyll (the plant pigment that captures solar energy) spike in the spring, when river flows are highest in the upper Bay. They fall to the lowest levels in winter, when freshwater flows are lower and light levels limit plant growth. Werdell conducted similar research that detailed those trends as observed by both SeaWiFS and MODIS.

Despite promising results, remote sensing experts say challenges remain in using satellites to monitor water quality in a shallow, turbid bay like the Chesapeake. SeaWiFS stopped operating in 2010, and MODIS is less capable because it senses fewer visible wavelengths. Beyond that, interference from the atmosphere can disrupt the chlorophyll signal; summer sunglint makes it difficult to observe phytoplankton activity; and chlorophyll is hard to observe in shallow, turbulent waters that contain more than just phytoplankton. Even in the best of conditions, distinguishing color changes associated with chlorophyll from those caused by colored dissolved organic matter (CDOM) can be difficult, Werdell said.

Son and Werdell are eagerly anticipating the launch of a next generation ocean-color sensor. The Plankton, Aerosol, Cloud, ocean Ecosystem (PACE) satellite is planned for launch in 2022, and scientists expect that it will be far more capable of viewing chlorophyll and a number of other water quality parameters.

“It is going to be a combination of measurements from ships, aircraft, and satellites that give us our best understanding of how well the Bay is responding to clean-up efforts,” said Harding. “We are already seeing hints that the cleanup is having a positive effect. Let’s hope we see that trend continue.”

Editor’s Note: This is the fourth story in a multi-part series exploring the natural splendor and environmental issues of the Chesapeake Bay Watershed. Read part one, part two, and part three.