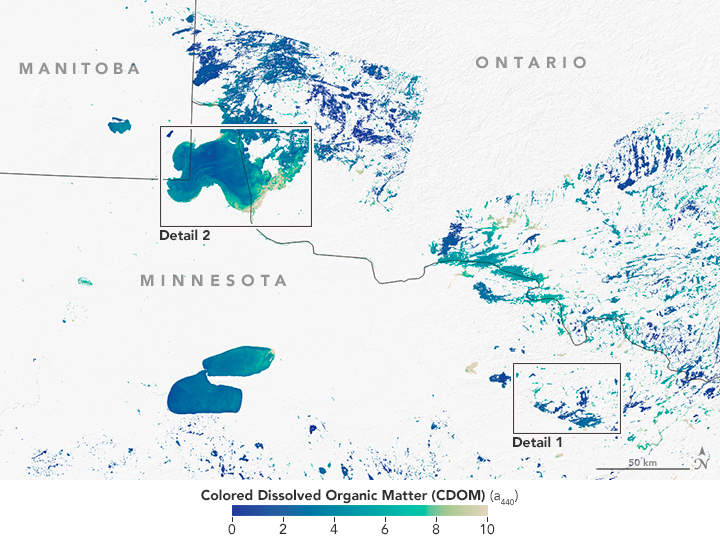 Minnesota: Land of the Many-Colored Lakes

Minnesota, “the land of 10,000 lakes,” might as well be called the “land of 10,000 shades of lakes.” Many of them owe their color to CDOM: colored dissolved organic matter.

When organic matter—leaves, roots, or bark—disintegrates in water, it changes the color of a river or lake, much like a adding a teabag to hot water. That’s because these organic materials contain tannins and lignins, colorful chemicals present in plants.

Researchers from the University of Minnesota mapped lake CDOM levels using Landsat 8 imagery and found that levels varied widely across the state, like so many varieties of tea. The question at the heart of their research: “Why does CDOM vary so much?” asked Patrick Brezonik, a professor emeritus at the university who studies CDOM.

In southern Minnesota, the lakes tend to have relatively low CDOM levels. The rivers and streams that flow into these lakes have low levels of organic matter, a result of fewer forested wetlands in the area. By contrast, northeastern Minnesota contains hundreds of darker lakes (when viewed in natural color), likely due to the higher level CDOM waters that feed into them. Beyond the north-south divergence, there can be a high degree of variability even between neighboring lakes, Brezonik said. “You can find a highly colored lake, and then you go a mile away and it’s perfectly clear.” 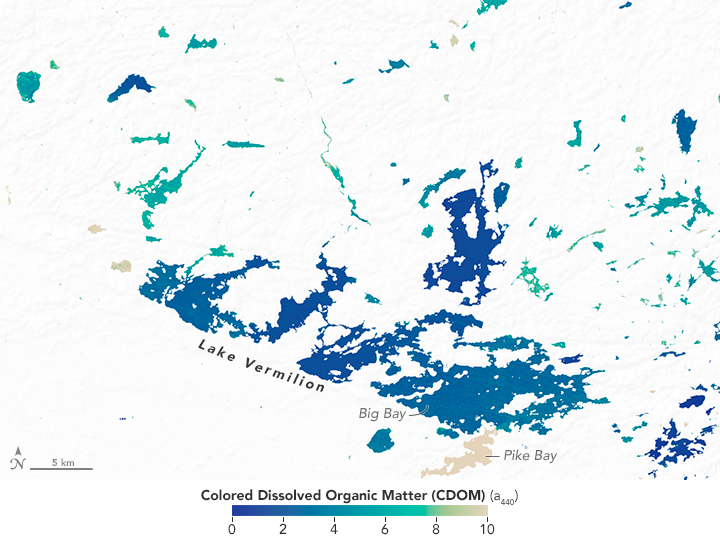 Furthermore, there can be high variability even within a single lake. Case in point: Lake Vermilion. The data visualization above shows concentrations of CDOM in the lake basins. Note the very low CDOM levels in the lake’s western and middle basins, moderate levels in the Big Bay (eastern basin), and very high levels in Pike Bay (south of Big Bay). A narrow opening at the mouth of the bay prevents the water in Pike Bay from mixing with the rest of the lake, said Leif Olmanson, a researcher at the University of Minnesota. Each of the basins in Lake Vermilion appears different from others around it, both in satellite imagery and to the naked eye.

By contrast to Vermilion, Lake of the Woods (below) churns with CDOM throughout the basin. At the southeast edge, highly colored water drains into the lake from the Rainy River. Here, too, the water flow is blocked by barrier islands. Swirling patterns form across the lake surface as waters with different CDOM levels mix.

“The key is to understand that [most] CDOM is produced not in lakes, but in the watershed and exported into the lake,” said Brezonik. Only a minor amount of CDOM is produced in the lakes themselves. Highly colored surface waters tend to drain from forested areas with wetlands. The levels of algae and of suspended sediment (such as minerals and clay) also can affect the color of a lake.

The researchers noted that learning more about CDOM will help them better understand water treatment problems. Discerning the amount of colored dissolved organic matter that a lake holds is useful for monitoring how these watersheds change in the future. That becomes especially important giving shifting water sources, Brezonik said. “In the future, we think lakes and rivers will be more important as water supplies.” 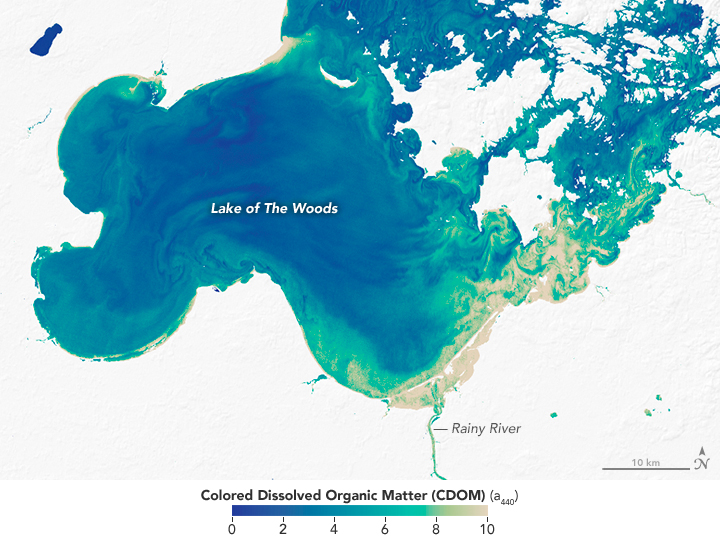