A week after Hurricane Matthew hit Haiti, the death toll had climbed to 1,000 people, and United Nations agencies struggled to bring aid to devastated communities. The scope of the destruction on the Caribbean island nation is so dramatic it can be seen from space.

The Operational Land Imager (OLI) on Landsat 8 captured these images of Haiti. In each pair, the greener image shows the area on September 26, 2016, a week before the storm. The second, browner image shows the same area on October 12, 2016, eight days after Matthew made landfall as a category-4 storm.

One of the most obvious changes is vegetation loss. Alexandra Morel, an ecosystem scientist at the University of Oxford, previously studied the vulnerability of the Haitian people and their environment. Her work was focused closer to the border with the Dominican Republic, but she notes that steep slopes covered with vegetation and farms are the common topography across much of Haiti.

“Generally in Haiti land is managed in very small patches, with a household having subsistence crops in a number of locations, often on steep slopes,” she said. “When I look at these images, I see what seems to be seriously denuded hillsides, which I assume are from crops and fallows being washed away.”

The top image pair shows a detailed view of Les Cayes, on the southwest coast of Haiti’s Tiburon Peninsula. This seaport town of 86,000 people was among the densely populated areas hit hard by Matthew. The New York Times reported that more than 90 percent of buildings in the town were damaged or destroyed.

Peter Wampler, a geologist at Grand Valley State University who has worked on water projects in Haiti, points out another obvious change: the amount of sediment coursing out of the rivers and streams. “This sediment is derived from slopes that often lack protective tree cover and soils,” he said. As a result, abundant sediment reaches the ocean, visible as the light-brown color at the mouth of the Ravine du Sud. 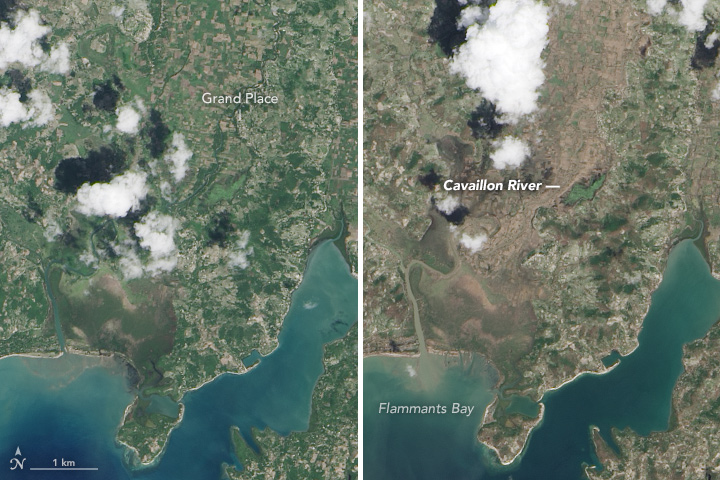 Areas to the north near Nan Fort (second image pair) and to the east near the Cavaillon River (third image pair) did not take a direct a hit from Matthew, but the hurricane’s effect on the landscape was still striking.

The mouth of the Cavaillon River is shown in detail in the third image pair. “You can see from the change in ocean color that a significant amount of debris has been washed away,” Morel said. “I would conjecture that a good amount of topsoil, which Haitian farmers can’t really afford to lose, is likely a large contributor to that.”

Landslides may have occurred in these areas, but details so far are limited, according to Thomas Stanley, a geoscientist at NASA’s Goddard Space Flight Center who catalogs rainfall-triggered landslides. “My guess—based on very little evidence—is that landslides were widespread, in some cases deadly,” Stanley said, “but relatively unimportant compared to wind damage and flooding.”