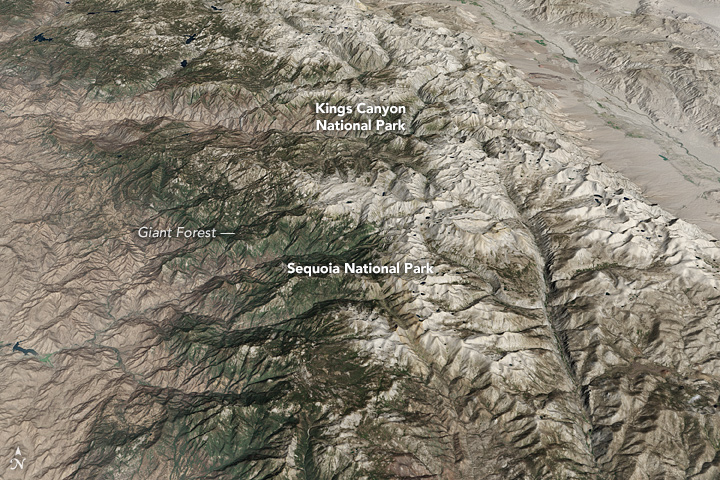 The ‘Land of Giants’

If ever there were a place that makes a human feel ant-sized, it is Sequoia and Kings Canyon National Parks.

Roughly one-third of the world’s naturally occurring sequoias grow in 75 groves in these adjacent parks, according to the National Park Service (NPS). The trees require high soil moisture and only grow between certain elevations (5,000 to 7,000 feet—1500 to 2330 meters) on the western slope of the southern Sierras.

The towering sequoias are more fragile than they appear; more than once, human activities have threatened to fell them. The creation of the park in 1890 saved the Giant Forest, one of the park’s largest groves, from logging. Inside that forest, visitors can marvel at the world’s largest tree, the General Sherman Tree, which stands 275 feet (83 meters) tall and has a 36-foot (11 meters) in diameter at its base.

A report commissioned in the 1960s found that development in the Giant Forest was having negative effects on water flow and growth of the sequoias. In the late 1990s, the Park Service began to clear existing structures out of the grove to restore it to its natural state. Since then, NPS has demolished nearly 300 buildings on more than 231 acres.

The image below of Sequoia and Kings Canyon National Parks was captured by Landsat’s Operational Land Imager (OLI) on September 1, 2016. The image was overlaid on terrain data from the ASTER Global Digital Elevation Model (GDEM). It shows the park’s dramatic elevation change from 1,370 to 14,494 feet (418 to 4418 m). Peaks appear sharper, in higher relief, with lower contrast along gentler slopes. Together, the parks cover a combined 1,353 square miles (3,500 kilometers).