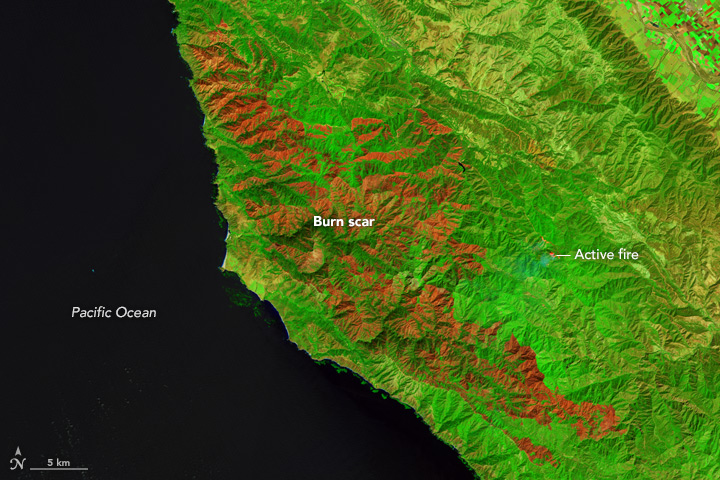 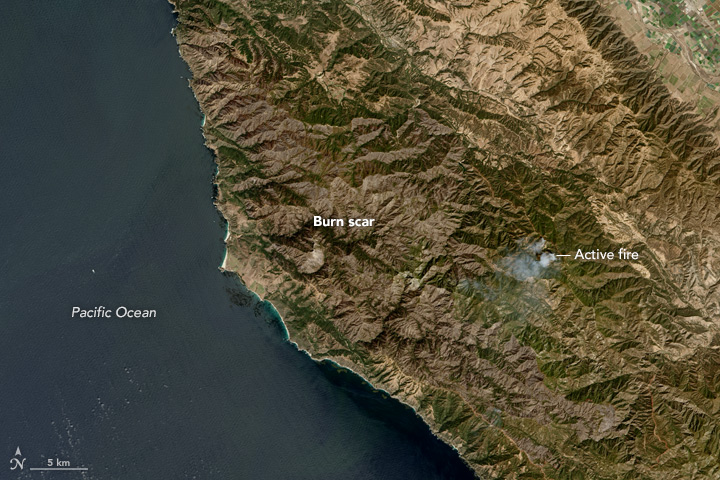 In late July 2016, an illegal campfire gave rise to the Soberanes fire that grew near the California coast between Monterey and Big Sur. The wildfire continued burning in the Los Padres National Forest through August. As of late September, it was still not fully contained.

The Operational Land Imager (OLI) on the Landsat 8 satellite acquired these images of the area on September 15, 2016. The top image is false-color, and combines shortwave infrared, near-infrared, and green light to provide a clear view of the charred landscape (dark red). The main area of active fire (bright red), which is nestled amid unburned vegetation (green), is small by comparison.

The second image shows the same area in natural color. The burn scar in this image is brown; the surrounding unburned forest is dark green. The burn scar is subtle in natural color, so the clearest indication of the fire is the rising plume of smoke. Turn on the image comparison tool to see where the burn scars transition into actively burning areas. When these images were acquired, the fire had burned 435 square kilometers (107,479 acres) and was 55 percent contained.

Some of the smoke from the fire hung low in the local valleys, most notably on September 18 after a temperature inversion set in. An air quality report called the air “unhealthy” at sites near the fire including Carmel Valley, Cachagua, and Tassajara.

Not all of the smoke, however, stayed local. The Ozone Mapper Profiler Suite (OMPS) on the Suomi National Polar-orbiting Partnership (Suomi-NPP) satellite observed smoke fanning out to the southwest over the Pacific Ocean and inland to the east and northeast.

By September 20 the fire was 71 percent contained and had burned 490 square kilometers (121,050 acres). New evacuations were in place after winds carried embers across the containment line and started a new “spot” fire measuring less than 1 square kilometer.