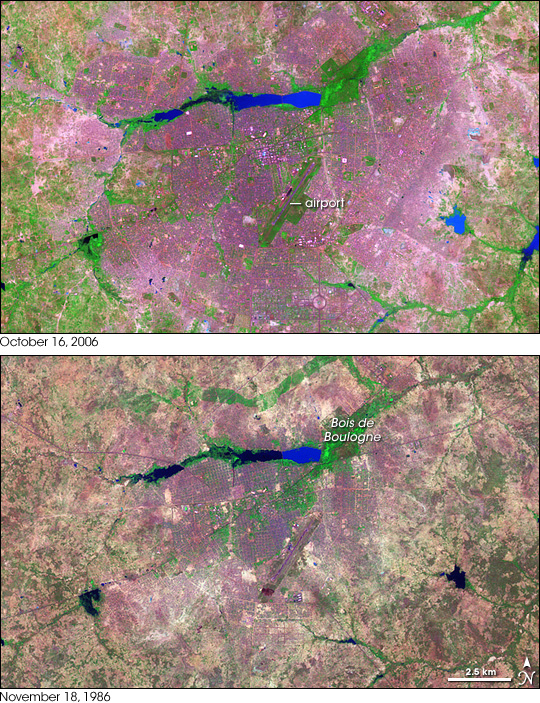 In western Africa, just south of the Sahara Desert, lies the landlocked nation of Burkina Faso. Despite the limited natural resources in this arid savannah, the nation experienced a 200 percent increase in urban population between 1975 and 2000. Much of that growth occurred in the capital city of Ouagadougou, where unplanned settlements sprang up along the city’s perimeter. Between 1960 and 1993, Ouagadougou experienced a 14-fold increase in area.

Over the years, NASA’s Landsat satellites have observed the increase in Ouagadougou’s extent. The Landsat 7 satellite captured the top image on October 16, 2006, and the Landsat 5 satellite acquired the bottom image on November 18, 1986. In these false-color images, vegetation appears bright green, bare or sparsely vegetated ground ranges in color from beige to gray-green, and water ranges in color from navy to electric blue. Paved surfaces and buildings appear pink-purple.

The 2006 image shows how urbanization radiated out from the city center, filling nearly the entire frame. Urbanization has increased especially in the east and south; in the 1986 image, random shapes of green and brown fill the area; in the 2006 image, that area is predominantly pinkish purple. Likewise, a crooked line of vegetation that is visible north of Bois de Boulogne in 1986 has all but disappeared in 2006.

In both images, the Ouagadougou airport appears as a conspicuous diagonal line near the center of the image. In 1986, the airport lies fairly close to the city’s outskirts. In 2006, continued urbanization has surrounded the airport with cityscape. Southwest of the airport, the beginnings of urbanization appear in 1986, and that urbanization is more pronounced in 2006.

Lakes and rivers near the top and right edges of the image show different colors between 1986 and 2006; the color change likely results from differences in sediment or organic matter suspended in the water.

In 2008, the United Nations Environment Programme (UNEP) published Africa: Atlas of Our Changing Environment highlighting changes detected by remote sensing, and providing overviews of each nation’s progress toward environmental sustainability in the late twentieth and early twenty-first century. UNEP found that, in the 1980s, Ouagadougou’s growth resulted predominantly from rural-to-urban migration. After that time, the population increased primarily from natural growth—birth rates exceeding death rates. The growth led to an explosion of unplanned settlements. Unplanned settlements may conflict with sustainable development goals, and they make it harder for the government to provide basic services, such as drinking water.

Despite growing urbanization, however, UNEP found that Burkina Faso made progress in some key areas of environmental sustainability. Protected areas increased slightly from 1990 to 2005, and per capita carbon dioxide emissions dropped slightly over roughly the same period. Meanwhile, access to better sources of drinking water and sanitation increased from 1990 to 2004, and the proportion of urban dwellers living in slums decreased slightly from 1990 to 2001. Nevertheless, water scarcity, desertification, and deforestation all threatened the country’s future health.