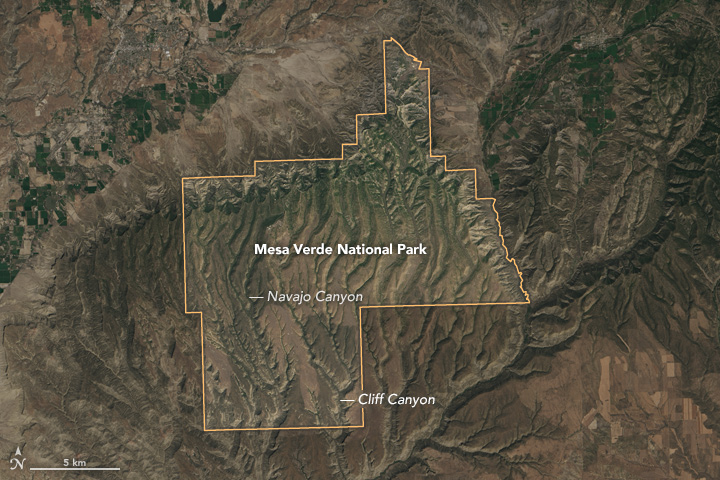 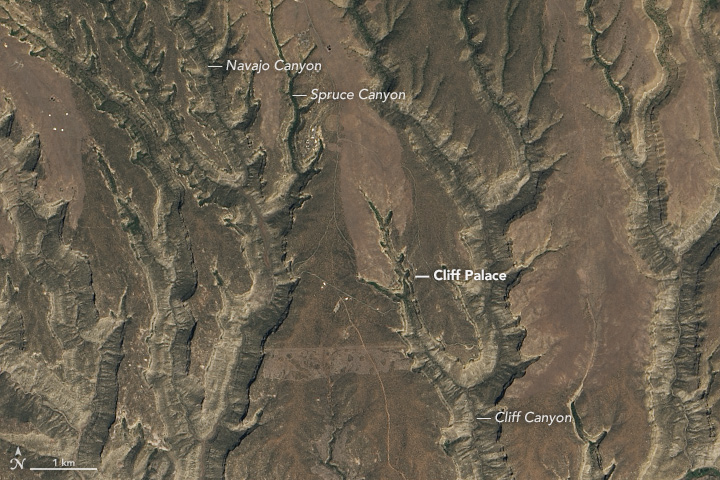 When Spanish explorers first reached southwestern Colorado and observed a broad sloping mountain with a nearly flat top, they called the feature mesa verde—“green table” in Spanish. The name stuck, though it now creates linguistic headaches for geologists and park rangers.

Cuesta—not mesa—is the correct geological term for the dissected tableland that makes up the park. Mesas are flat-topped highlands with steep sides. Cuestas are flat highlands that have a gentle slope in at least one direction.

In the case of Mesa Verde, the tableland dips at a seven-degree angle to the south. Over a distance of about 18 kilometers (11 miles), the elevation changes from 2,600 meters (8,570 feet) above sea level near the northern border of the park to roughly 2,070 meters (6,800 feet) near the southern border.

The fact that there is a gentle dip in the rock is more than geologic trivia. The slant contributed to the formation of cliff alcoves, which are large, arched recessions in the cliff walls. Alcoves form when water seeps into cracks, freezes, thaws, and slowly pushes the rock apart. Ancestral Puebloans used blocks of fallen rock pushed loose by the thawing and freezing of water to build their homes.

Today, several of the dwellings and settlements in these cliff alcoves—such as Balcony House, Cliff Palace, Long House, Spruce Tree House, and Step House—are popular sites for visitors to Mesa Verde National Park. With about 150 rooms, Cliff Palace is the largest cliff dwelling in the park.

The Operational Land Imager (OLI) on Landsat 8 captured this image of the park on August 15, 2016. The lower image shows a more detailed view of the topography near Cliff Palace. (Note: an optical illusion known as relief inversion may cause the canyons to appear as highlands to some viewers.) The palace, as seen in the National Park Service photograph below, is situated beneath a layer of erosion-resistant sandstone. 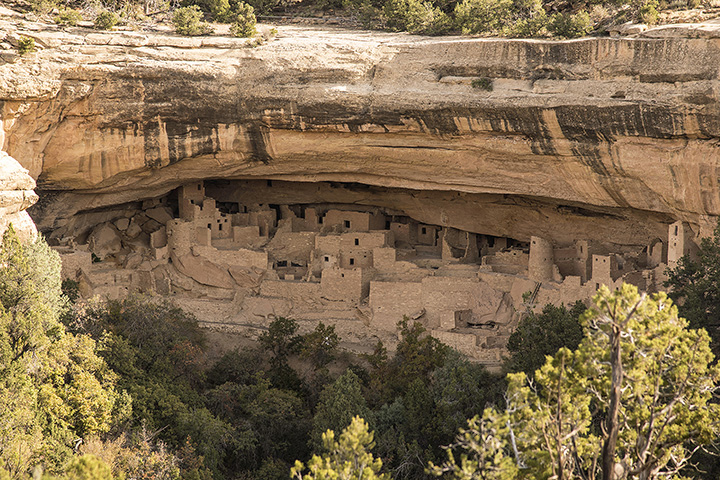