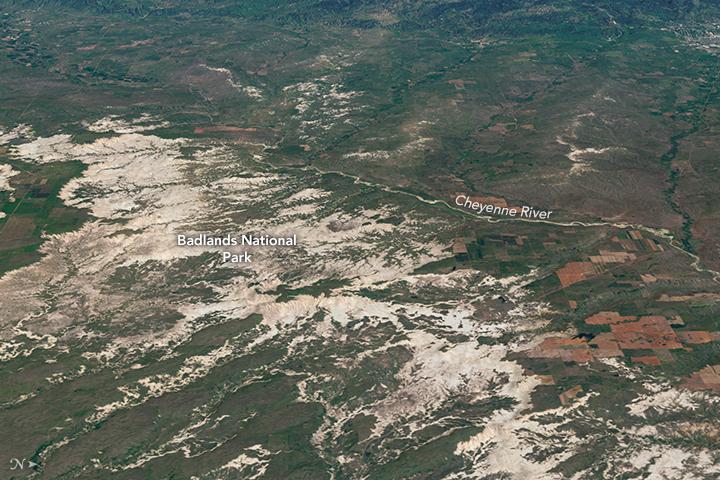 Ancient clams, 35-million-year-old rhinoceros-like creatures, and a thick coat of volcanic ash—all of these are baked into the layer cake of stone at Badlands National Park. Over epochs, deposition and erosion have carved sharp spires and deep canyons out of this South Dakota landscape. Visitors to this park can wander alongside, under, and between millions of years of geologic history.

The three-dimensional composite image above includes data from the Operational Land Imager (OLI) on Landsat 8, acquired on July 23 and July 30, 2015. The Landsat imagery is draped over a digital elevation model from the ASTER instrument on NASA’s Terra satellite. Rock ridges are visible in tan against the green prairie.

The Badlands have long been a choice destination for fossil hunters, as the stone here dates back roughly 75 million years to when the Great Plains were covered by a shallow, inland sea. As the water level dropped and the sea floor became land, the Pierre Shale (the bottommost rock layer of the Badlands) crumbled into soil and created the Yellow Mounds Formation, so called because of its mustard-like color. By 34 to 37 million years ago, when subtropical forests covered the land, river flood plains created the Chadron Formation, Eocene-era mud rocks under North Dakota, South Dakota, and Nebraska.

Then, 30 to 34 million years ago, the climate began to dry and cool. Savannah replaced forests, and oreodonts (sheep-like mammals) walked these lands. This era gave rise to the Brule Formation, a gray layer of stream and floodplain deposits. Later in the Oligocene Epoch, about 28 to 30 million years ago, a dense layer of volcanic ash from episodic eruptions in the Great Basin covered the landscape. It was this ash, along with sandstones, stream channel sand, and floodplain mud that created the Sharps Formation, which constitutes the uppermost layer of the Badlands today.

Fast forward millions of years, and the Badlands have a different sort of history. One hundred and fifty years ago, the Great Sioux Nation (including the Oglala Lakota) dominated the northern prairie. The valleys of the Badlands provided the tribes with shelter, fresh water, and game to hunt. But by the late 1800s, homesteaders arrived in South Dakota. Prairie land was converted for farming and ranching purposes, and the Sioux were forced out their former territory.

The Badlands National Monument was created in 1939, and the area was soon cleared of residents. During World War II, the U.S. Air Force used the land as a practice gunnery range. Badlands was designated a national park in 1978, and the Park Service included surrounding grasslands and the boundaries grew to encompass roughly 610 kilometers (380 miles).

“The preservation of this relatively small exhibit of native grass is an important responsibility in itself, since no comparable section of the Great Plains has been set apart to be preserved in its natural condition,” the National Park Service declared in a 1952 statement. Grazing there was phased out over several years beginning in 1961.

Today, the park is home to bison, bighorn sheep, prairie dogs, and black-footed ferrets. Visitors can hike along trails or drive, taking in the view from South Dakota’s Highway 240.