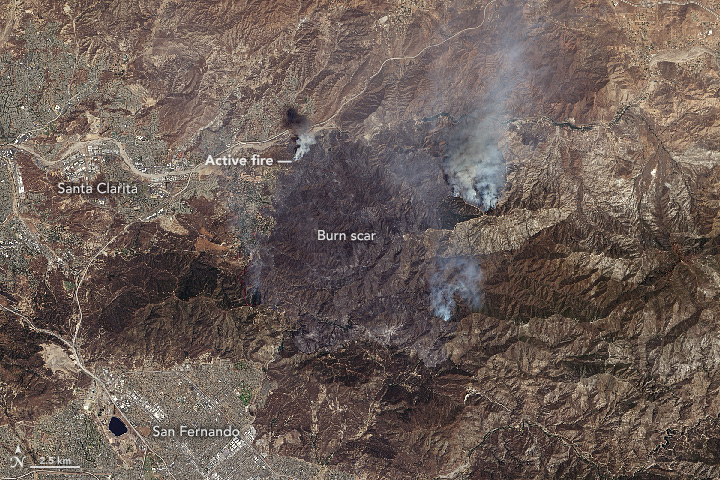 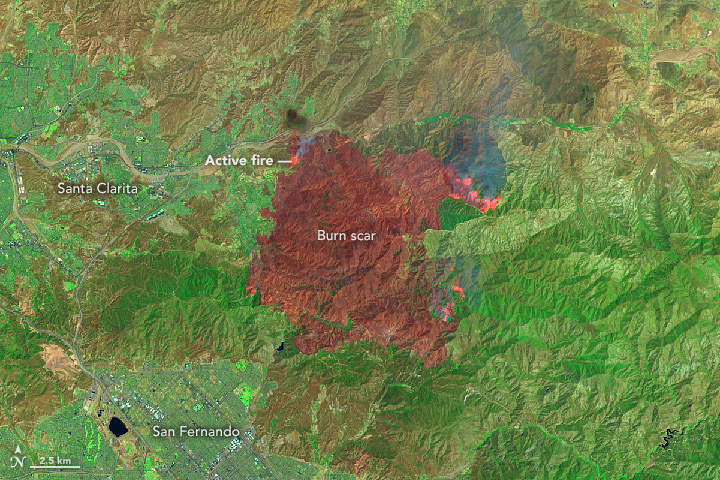 The Sand Fire in Southern California has already left its scorch mark on the landscape. The Operational Land Imager (OLI) on the Landsat 8 satellite acquired these images of the burn scar while the fire still raged on July 24, 2016.

In the top, natural-color image, the land surface is slightly darkened in the hills and canyons north and east of Santa Clarita and San Fernando. The primary evidence of the fire is the smoke plumes around the edges. The second, false-color image provides a clearer view of the burn scar. It combines shortwave infrared, near-infrared, and green light (Landsat OLI bands 7-5-3) to show active fires (bright red), scarred land that has been consumed by the fire (darker red), and intact vegetation and human development (green).

The fire consumed chapparal and brush in Sand Canyon and Placerita Canyon, on the north edge of Angeles National Forest. According to InciWeb, the fire started on July 22. As of July 25, it had burned 33,117 acres (more than 51 square miles) and was 10 percent contained by more than 2,900 firefighters from Los Angeles County and the U.S. Forest Service.

Thousands of local residents have been advised to evacuate more than 10,000 homes. At least 18 structures and buildings have been destroyed. High temperatures and shifting winds, coupled with long-term drought, have fueled the blaze.