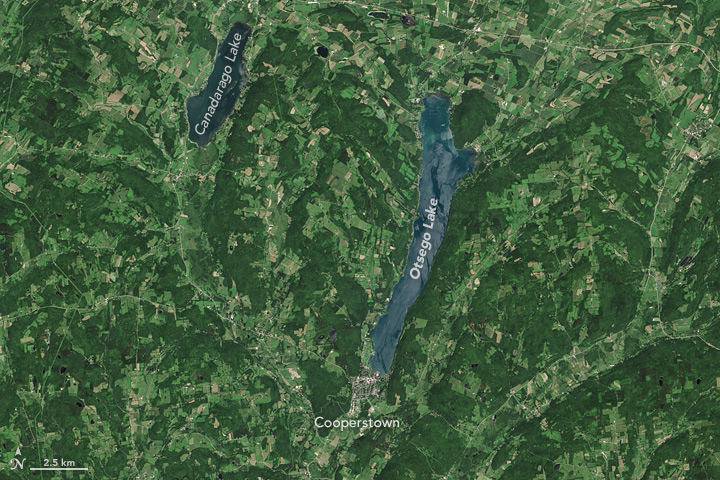 Following a Raindrop from New York to Newport News

In The Leatherstocking Tales, a series of historical novels set in the 18th century frontier of New York state, James Fenimore Cooper called Otsego Lake the Glimmerglass. He described “a bed of pure mountain atmosphere compressed into a setting of hills and woods.” It was a fitting description for the pristine, narrow lake which, despite some development around its shores, remains clean enough for swimming, for drinking, and for sheltering a wide array of fish. That’s not the case for every body of water in the Chesapeake Bay watershed.

After pooling in the Glimmerglass for a time, a droplet of rain that falls in upstate New York will eventually make its way into a small, winding stream that drains the southern end of the lake. These are the headwaters of the Susquehanna River and the beginning of an epic journey toward the sea. The Susquehanna flows across 464 miles (747 kilometers) and three states—New York, Pennsylvania, and Maryland—before emptying into the Chesapeake Bay and the Atlantic Ocean.

As that raindrop makes its way down the river and through the Bay, it passes a diverse terrain with a fascinating geologic history. Over the past few decades, detective work by a group of scientists has uncovered at least three ancient river channels buried beneath the modern Bay, with the oldest flowing some 300,000 to 500,000 years ago.

A certain rhythmic regularity defined the emergence and disappearance of these ancient rivers, which came and went with ice ages in North America. The ancient predecessors of the Susquehanna were deepest at the peak of ice ages—periods when so much seawater was locked up in land ice that sea levels were hundreds of feet lower than today. Broad plains, now submerged, extended tens to hundreds of miles seaward into the Atlantic. When the ice melted again, the ocean flooded these plains and river valleys, turning fast-flowing rivers and deep valleys into a wide, slow-moving coastal plain estuary with a muddy bottom. Today, if you look at the Chesapeake Bay from above, you can still see its riverine ancestry imprinted onto its branching, dendritic shape. 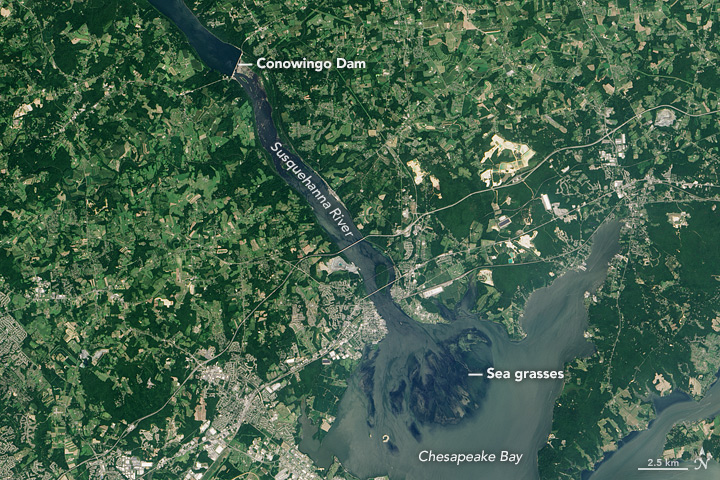 In the map at the bottom of the page (and in this mosaic), you will notice that the rivers and streams flowing into the Chesapeake Bay tend to widen markedly as they approach the Bay. These relatively short and stubby rivers—the James, the York, the Rappahannock, the Elk, the Chester, the Choptank, and the Nanticoke—share the branching, bulging appearance of many manmade reservoirs in the American West, such as Lake Powell and Lake Mead. And for good reason. Lake Powell and Lake Mead are river valleys that were flooded after the construction of a dam. The Chesapeake Bay is essentially a flooded river valley, but filled by rising seas rather than rivers and dams.

However, the Susquehanna River—which provides about half of the Bay’s water—does not fit this pattern. While most of the rivers that feed the Bay flow through the low-elevation Atlantic Coastal Plain, the Susquehanna inhabits a more rugged geologic zone known as the Piedmont. These two zones are separated by the Atlantic fall line, an important line of demarcation for geologists. South of the line, soft, flat sedimentary rocks dominate the landscape. North of it, harder metamorphic rocks are the norm. Since rivers south of the line stand at lower elevations, the rising sea levels widened the mouths of these rivers.

Not far from where the Susquehanna River enters the Bay near Havre de Grace, Maryland, the waters wash over an expanse of underwater grass on the Susquehanna Flats. The flats are prime habitat for birds, fish, and crabs, and the health of the grasses is an indicator of water quality in that part of the Bay. When the water gets too cloudy—because of suspended sediment, excessive nutrients, or algae—the grasses don’t get enough sunlight. When the water is clear, grasses thrive.

After virtually disappearing in the 1980s due to poor water quality, the grasses on the Susquehanna Flats are in the midst of a comeback. The turnaround started in 2010, likely because several dry years in the Mid-Atlantic region reduced the amount of fine sediment flowing out of the river. In addition, scientists think declining levels of nutrients entering the Bay—the result of an ongoing effort to educate citizens (particularly farmers) about fertilizer pollution—has helped the grasses. 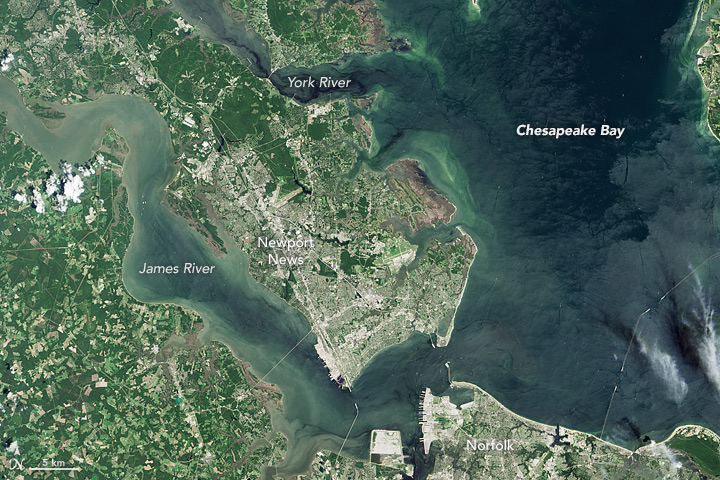 While the origins of the Upper Chesapeake are clear, the wide mouth of the lower Bay suggests another force at work. Indeed, the lower Chesapeake owes its shape in part to an asteroid or comet impact some 35 million years ago. Based on the size of the impact crater, geologists estimate that the chunk of space rock must have been three to five kilometers across. Though it likely struck water, it punched a huge hole in Earth’s crust that has since been covered by newer layers of sediment and rock.

A bit of the evidence for this crater comes from a depression where the Chesapeake’s water pools before entering the Atlantic Ocean. Signs of the impact are also recorded in the shapes of certain Chesapeake Bay tributaries. Notice in the image below how the James River has a sharp turn toward the northeast near Norfolk; this is a place where the river poured into the outer rim of the ancient crater. 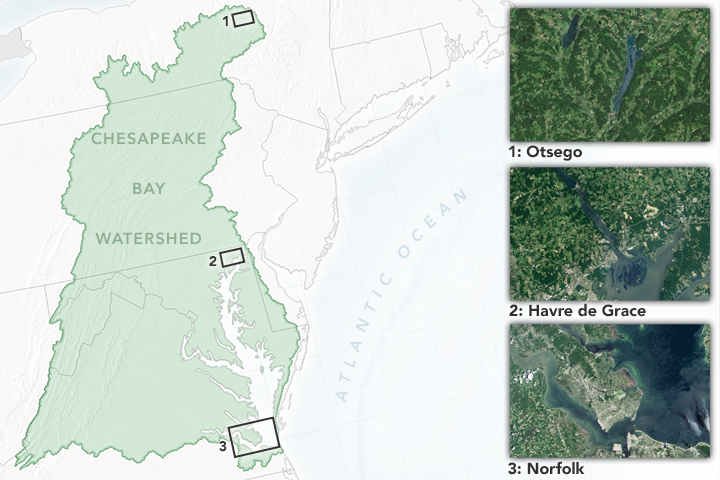 Editor’s Note: This is the first story of a four-part series exploring the natural splendor and environmental issues of the Chesapeake Bay Watershed.