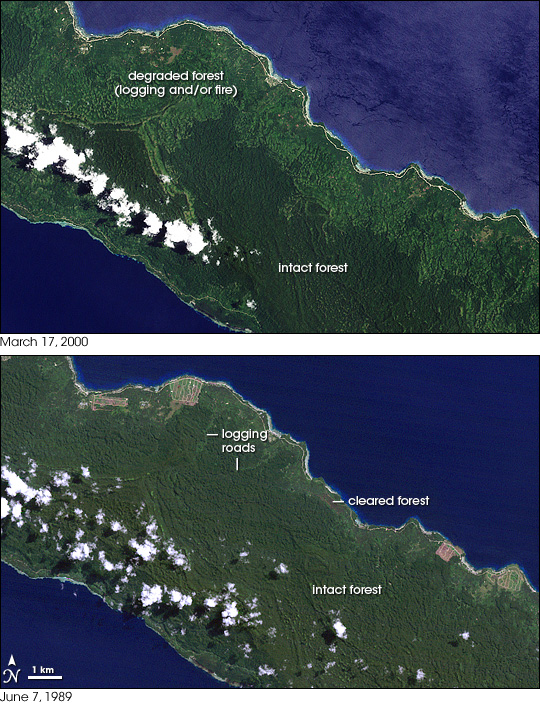 The scientists documented the wide-spread deforestation and degradation of lowland rainforest on the islands east of the mainland, including the island of New Ireland, shown here. This pair of natural-color images shows the impact of logging and forest fires on northwestern New Ireland in 2000 (top) compared to 1989 (bottom). In both images, intact tropical rainforests appear deep green, while plantations and degraded forest appear lighter green. The image from 1989 was captured by the Landsat 5 satellite, while the 2000 image is from Landsat 7. In 1989, clearing was restricted to a narrow rim at the coastline, but logging roads were already visible. Intensive logging took place on the island in the 1990s, and then in 1996, fires that began in the grassy and brushy areas near the coast invaded the logged forest and spread inland to intact forests, causing severe damage over a large area.

Transportation infrastructure, particularly roads and coastal shipping areas, makes some forests more accessible to loggers than others. Nearly 60 percent of the forests on the eastern islands of Papua New Guinea are accessible to logging, and by 2002, 63 percent of the accessible forests had been deforested or degraded. On the mainland, just under 30 percent less of the logging-accessible areas had been deforested or degraded. Those statistics may seem grim, but according to the Minister of Forests (in a letter published with the analysis), the report provided good news, too. Counting both intact and re-growing forests, just over 70 percent of the country is still forested, and if the country adopts more sustainable forestry and agricultural practices, forests can still be preserved and restored.