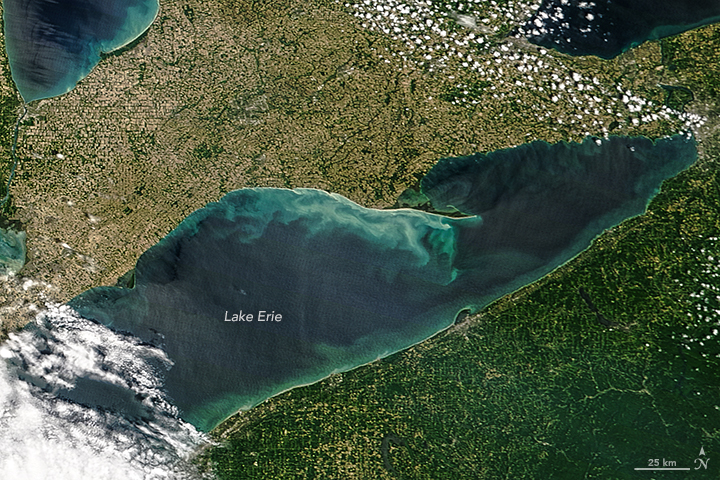 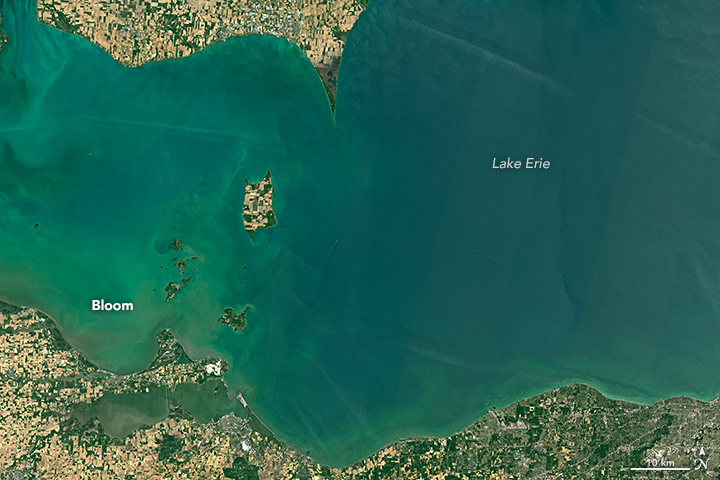 Seiches and whiting events and algae blooms are regular occurrences on Lake Erie. Each of these events can add swirls of color to the blue-green waters of the Great Lakes, as viewed from satellites.

Seiches are wind-driven waves that pile up water on one side of the lake or the other, and the motion of the wind and water often stirs up sediments from the bottom of the relatively shallow lake. Whiting occurs when changes in water chemistry—often spurred by temperature changes—increase the rate of photosynthesis by microscopic marine life and cause a sudden release of calcium carbonate particles just below the surface. Phytoplankton or algae usually start to flourish in June and July in Lake Erie as the water warms and stratifies. Algae tend to peak in August and September.

Lake Erie started to show some color in mid-June 2016. The top image was acquired on June 9, 2016, by the Moderate Resolution Imaging Spectroradiometer (MODIS) on NASA’s Terra satellite. The natural-color image shows the north and east ends of Lake Erie between Pennsylvania, New York, and Ontario. According to oceanographer Rick Stumpf of the National Oceanic and Atmospheric Administration (NOAA), the image appears to show the resuspension of sediments in the lake. The region was buffeted by persistent 20 to 25-mile per hour winds on June 8, which likely stirred up the bottom along the Ontario coast.

The second image shows a closer view of west end of Lake Erie on June 12 as observed by the Operational Land Imager (OLI) on the Landsat 8 satellite. The OLI instrument includes a special “coastal blue” wavelength band that allows scientists to adjust for visual distortions caused by the atmosphere near the coast. The image shows faint tinges of green, likely chlorophyll from diatoms or other phytoplankton.

The west end of the lake near Toledo and Sandusky, Ohio, has been troubled by intense algae blooms in recent years. The worst blooms tend to occur in years with heavy spring rains and excess winter snow and ice runoff. Researchers are expecting a milder season in 2016, however, because rainfall totals are down slightly from the long-term average. Runoff from lakes and streams in this area can bring heavy loads of phosphorous, nitrogen, and other agricultural fertilizers into the lake. The nutrients from farms and from septic systems can promote excessive blooms that can harm water quality and sometimes suffocate other marine organisms.