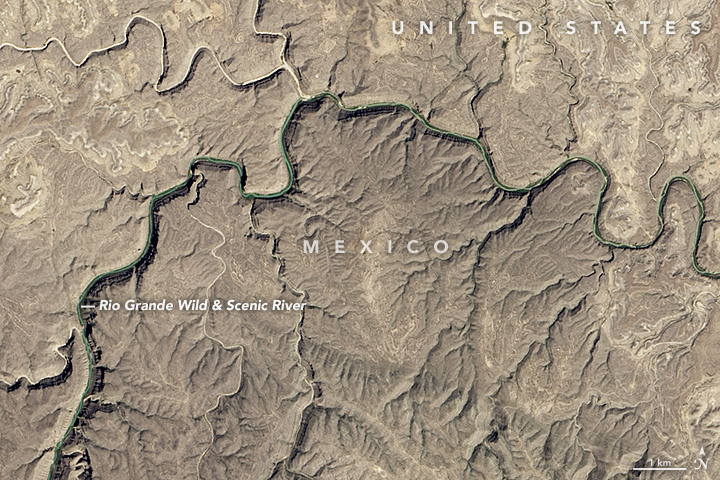 Lower Canyons of the Rio Grande

The Rio Grande is a major North American river, flowing more than 3,000 kilometers (1,900 miles) from Colorado to the Gulf of Mexico. In 1978, the U.S. Congress designated 315 kilometers (196 miles) of the river along the U.S.-Mexico border as a “wild and scenic river.” The designation protects the river’s ecosystem and its natural free-flowing state.

The Operational Land Imager (OLI) on Landsat 8 acquired this image of the river on March 21, 2016. It shows a segment of the protected river east of Big Bend National Park. In these “Lower Canyons,” layers of rock were laid down about 100 million years ago and then shaped by lifting, folding, and faulting. The river cut through these rocks to form the steep walled canyons visible today.

Along the 134 kilometers (83 miles) of the Lower Canyons area, you will find yourself in a truly remote river wilderness. This remoteness is likely part of the reason that a relatively small number of people visit the area compared to other sites managed by the National Park Service. Paddlers visit the Lower Canyons of the Rio Grande take advantage of this free-flowing river, maneuvering water ranging from calm to rapid as they float between canyon walls rising up 150 to 450 meters (500 to 1,500 feet). But it can take at least five days to emerge from a paddling trip through this part of the river.

Despite its remoteness, the river is not immune from human influence. Dams upstream can affect the river downstream, changing the natural flooding cycles that normally shape the banks and build habitat for plants and animals. Drought can also affect the Rio Grande. In 2003 and 2015, portions of the river near El Paso ran dry.