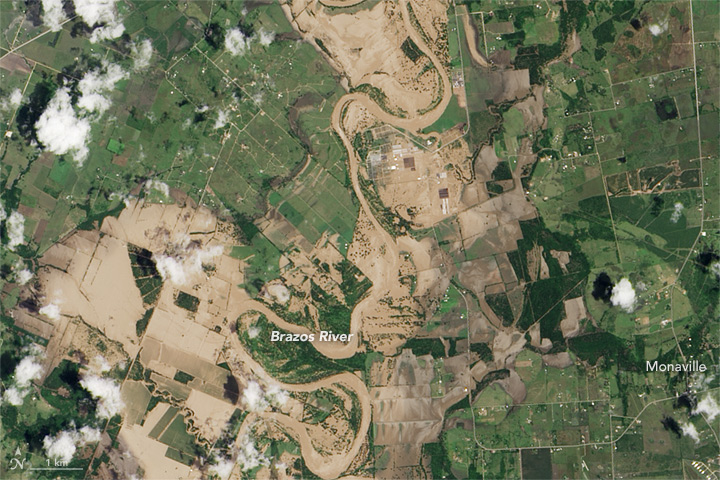 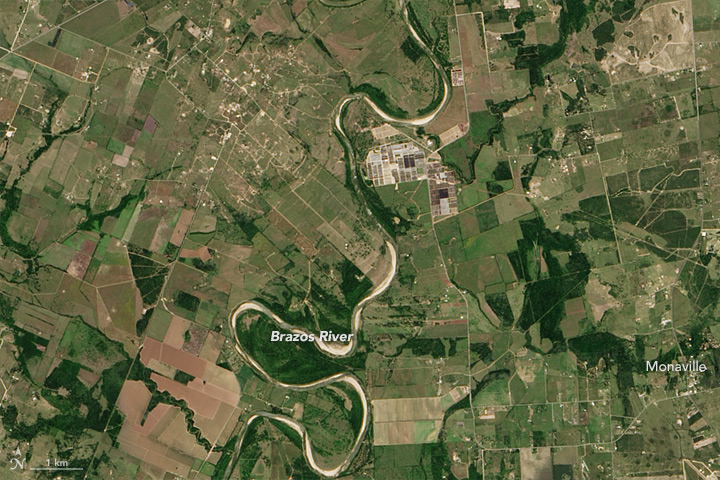 Just six weeks after being drenched by record-setting rainfall, much of Texas has been inundated again by a seemingly endless stream of slow-moving thunderstorm systems. Water levels on the Brazos River, near Houston, crested higher than they have in more than a century. The Texas governor declared states of emergency in 31 counties by June 1, 2016.

The Operational Land Imager (OLI) on Landsat 8 acquired these images of southeastern Texas on May 28, 2016 (top) and May 4, 2013 (second image). The top image shows flooding along the Brazos River just west of Monaville, while the second image shows the river when it was well within its banks. In 2014, the river nearly ran dry in places due to drought. The images below from the same days show the wider scale of the flooding.

On June 2, 2016, the Brazos River rose to 54.81 feet, according to gauges near Richmond, Texas. (The previous record was 50.30 feet on October 21, 1994.) Downstream at Rosharon, the river reached 51.97 feet; anything above 51.3 feet is considered major flooding at that point. Forecasters expect water levels to remain high for up to three weeks because more storms are predicted for early June and because swollen reservoirs upstream will need to release water.

According to news reports, at least six people have died and hundreds have been evacuated by boat from flooded homes. Hundreds (perhaps thousands) of buildings and homes have been damaged, and many roads have been closed.

According to news sources, Texas was doused with more than 35 trillion gallons of rain in May 2016. Meteorologists attribute the wet spring to lingering effects of El Niño and to kinks in the jet stream that have slowed down weather systems while drawing in moisture from the warm Gulf of Mexico..