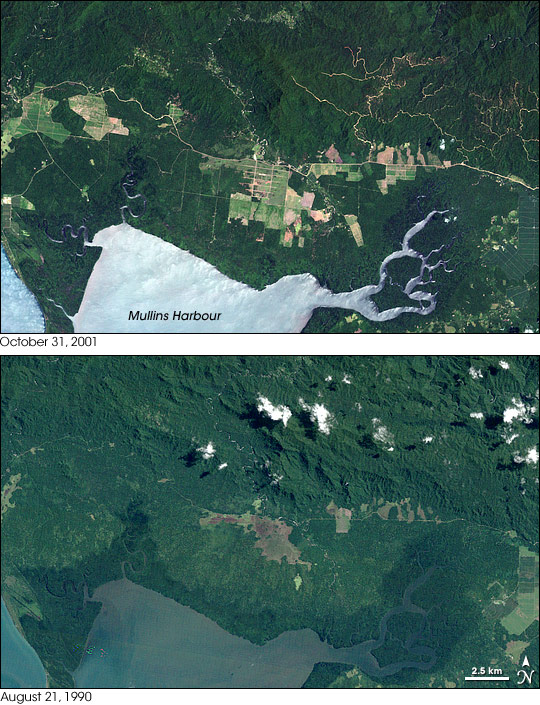 In June 2008, an international team of researchers released a report on the state of Papua New Guinea’s forests. The study summarized the findings from a five-year project in which the scientists compared high-resolution satellite imagery from the early 1970s and the early 2000s. The researchers found evidence of rapid deforestation and degradation, driven primarily by logging, subsistence agriculture, fires, and the development of mines and plantations. In 2001, some 362,000 hectares (3,620 square kilometers) were deforested or degraded. Recommending reforms to Papua New Guinea’s forest management, the study warned that, if current deforestation rates continued, the country might lose half its tree cover by 2021.

To conduct the study, researchers used satellite imagery from SPOT 4 and SPOT 5, operated by France’s Centre National d’Etudes Spatiales, and the Enhanced Thematic Mapper Plus (ETM+) on NASA’s Landsat satellites. These Landsat images show an area near the southeastern tip of mainland Papua New Guinea. Landsat 5 acquired the bottom image on August 21, 1990, and Landsat 7 acquired the top image on October 31, 2001. Consistent with the study’s findings, these images show an expansion of deforested areas.

The 1990 image shows relatively small areas of deforested land. The largest area appears near the center of the image, and it is linked by a road to a series of smaller deforested plots in the east. The 2001 image shows larger and more numerous deforested areas. In this image, the deforested land ranges in color from green to pale red-brown, suggesting a combination of cultivated crops, sparse vegetation, and bare ground. The network of roads has also increased dramatically, and one winding road cuts horizontally across the image, connecting with newly deforested areas in the west.

Along the eastern edge of the image, one area gives the appearance of forest recovery. In the 1990 image, this area appears pale green, clear evidence of deforestation. In the 2001 image, the same area is deep green like the surrounding forest. Close inspection, however, shows an array of rectangles outlining this area, and unlike the nearby forest, it has a smooth texture. This area likely supports mature plantation crops.

Some differences between these images result from the position of the Sun when the observations were made. The landscape appears more rugged and hilly in the 1990 image, due to lengthened shadows. The lighter color of the water in the 2001 image results from sunlight glinting off the water’s surface.

You can download a 28.5-meter-resolution KMZ file comparing the forest cover from 1990 to 2001, which is suitable for use with Google Earth.