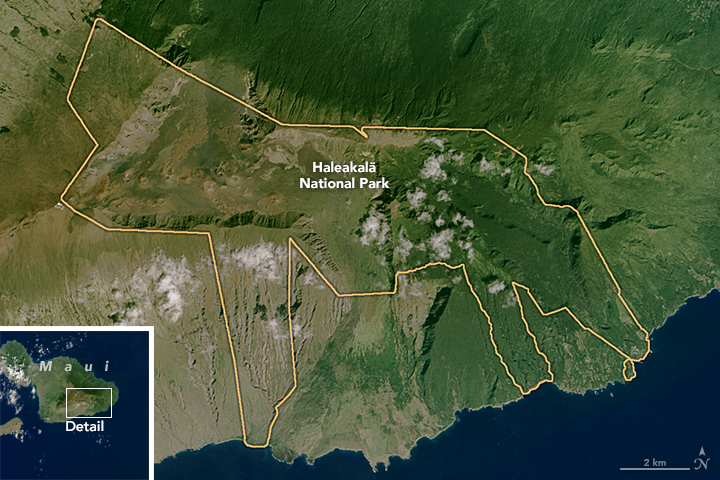 House of the Sun

In 1907, writer Jack London scaled a towering mountain in eastern Maui, the second largest of the Hawaiian Islands. When he reached the top and looked east, he was confronted with an otherworldly scene. “Far above us was the heaven-towering horizon, and far beneath us, where the top of the mountain peak should have been, was a deeper deep, the great crater, the House of the Sun,” London wrote. “The tie-ribs of earth lay bare before us. It was a workshop of nature still cluttered with the raw beginnings of world-making.”

Though London called the depression a crater, he was really looking down on the valley that now makes up the core of Haleakalā National Park. The valley was sculpted by the forces of erosion rather than by the explosive eruptions that produce volcanic craters or the sinking of land (after eruptions) that creates calderas.

That is not to say the area is not rich with signs of volcanic activity. “This floor, broken by lava flows, and cinder cones, was as red and fresh and uneroded as if were but yesterday that the fires went out,” London noted. “The cinder-cones, the smallest over four-hundred feet in height and the largest over nine-hundred, seemed no more than puny little sand hills, so mighty was the magnitude of the setting.”

On February 6, 2015, the Operational Land Imager (OLI) on Landsat 8 acquired this image of eastern Maui. There is less vegetation in the valley—which comprises much of the national park—than to the north and east of the mountain because the valley lies in a rain shadow. Prevailing winds drop rain on the eastern and northern sides of the mountains because moisture gets squeezed from the air as it flows up and over the slopes. The cinder cones—steep conical hills around volcanic vents—appear as small mounds in the middle of the valley.

While London was correct that the lava flows are young, his time scale was a bit off. According to the U.S. Geological Survey, radiocarbon dating suggestions that the most recent eruption occurred between 1480 and 1600. The oldest exposed flows are 1.1 million years old, though geologists think the shield volcano began building itself up about two million years ago.

Haleakalā National Park was created on August 1, 1916, as part of Hawaii National Park. At that time, the park also included Kilauea and Mauna Loa. However, in 1961, the volcanoes of Hawaii and Maui were separated into different parks. The name Haleakalā is Hawaiian for “House of the Sun.” In Hawaiian mythology, a god named Maui climbed the mountain and lassoed the Sun’s rays to lengthen the day.