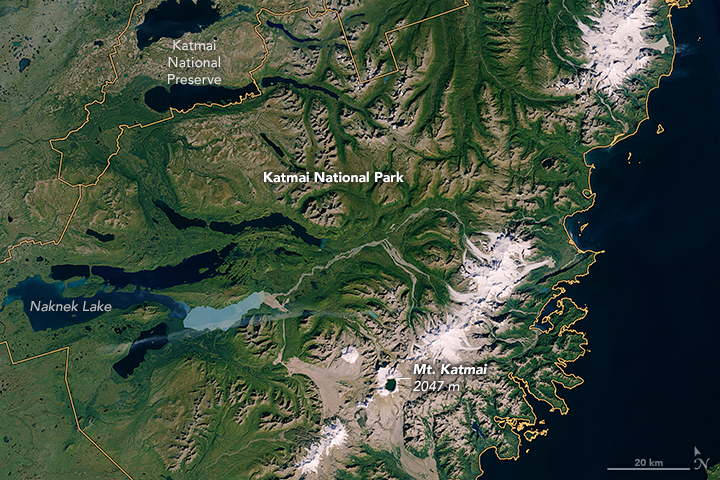 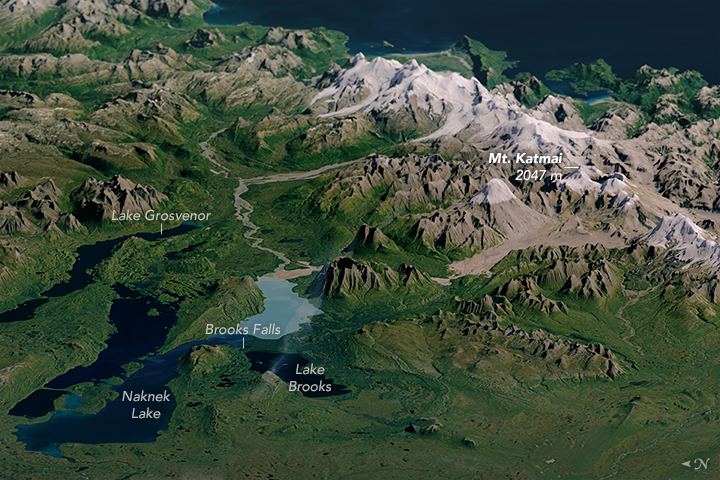 In 1912, magma flowed beneath Mount Katmai and exploded through the Novarupta volcano. Erupting at a rate of 520 million tons per hour, the material ejected from this Alaskan volcano was 30 times that spewed in the 1980 eruption of Mount St. Helens. Katmai National Monument was established by the U.S. government in 1918 to protect this extreme volcanic landscape.

In the decades that followed, Katmai came to be recognized for more than just its volcanism. Ecologists learned that the myriad lakes and rivers were important habitat for salmon and key feeding grounds for bears. As a result, officials expanded the protected area a few times until 1980, when it was designated Katmai National Park and Preserve. The park now spans 16,564 square kilometers (6,395 square miles) of southern Alaska, where the Alaska Peninsula first extends southwest into the Bering Sea.

The Operational Land Imager (OLI) on the Landsat 8 satellite acquired a natural-color image of the park on September 23, 2014. The second image shows the same scene with the Landsat data overlaid on a digital elevation model (created with data from the ASTER instrument on NASA’s Terra satellite). The model gives a three-dimensional sense of the landscape.

West of the mountains lie a number of long, finger-like lakes with deep basins scoured by glaciers. Iliuk Arm of Naknek Lake has on a milky turquoise color due to “rock flour”—the tiny remains of rocks that were ground up by a glacier. When these flour-like particles are suspended in water, they reflect and absorb certain wavelengths of light and change its appearance. 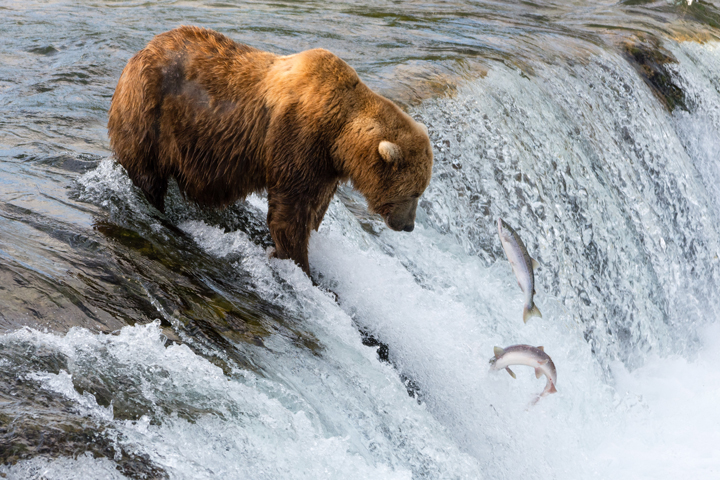 Some of the lakes are connected by narrow rivers and streams, and bears have learned that these areas offer a high concentration of fish and the best chance for an easy meal. From late June through early September, bears compete for the best fishing spot. In July, that prime location is Brooks Falls. The photograph above shows a brown bear at the falls fishing by the “stand and wait” method, which works well when the salmon are jumping. By September, most bears are found fishing at mouth of Brooks River.

Getting to Katmai National Park can be trickier than other parks because it is accessible only by boat or aircraft. But even if you can’t get there, you can see some of the feeding frenzy at Brooks Falls when video cameras show live footage during the summer months.