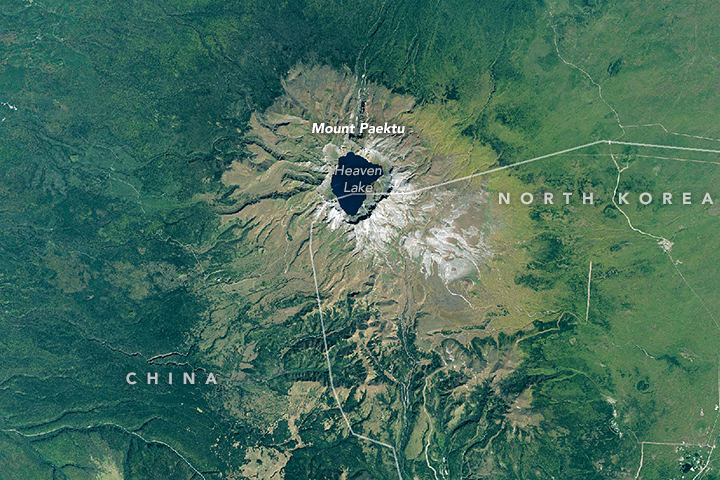 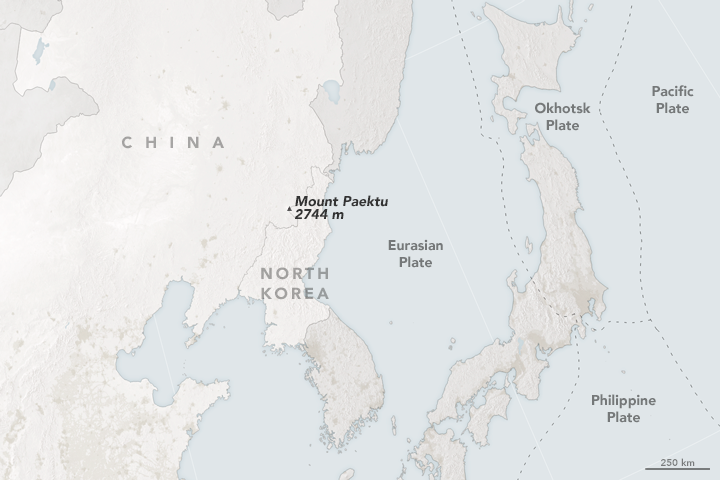 Circa 946 A.D., a mountain exploded violently along what is now the border of North Korea and China. The eruption—among the most intense in recorded history—flung ash as far away as Japan and left a large, bowl-shaped depression (a caldera) atop Mount Paektu (known as Changbaishan in China).

Between 2002 and 2005, a surge of weak earthquakes around Paektu aroused concerns that lava could be flowing into a shallow magma chamber and increasing the risk of another major eruption. Such an eruption would put the 1.6 million people who live within 100 kilometers (60 miles) of the volcano at risk. In response, government scientists from North Korea reached out to seismologists from abroad for assistance in studying the volcano. The unusual research collaboration involved scientists from North Korea, the United Kingdom, the United States, and China. After deploying a network of seismometers (sensors that measure the motion of the ground) in 2013 in China and North Korea, the international group published their first results in April 2016.

On September 22, 2015, the Operational Land Imager (OLI) on Landsat 8 captured this image of Mount Paektu. Forests surrounding the mountain appear dark green. The less-heavily vegetated slopes of the 2,744-meter (9,003-foot) mountain are light green. Heaven Lake sits within the caldera at the top of the mountain. The gray areas along the southeastern quadrant are lobes of solidified lava with minimal vegetation. Similar gray lava flows also surround a handful of cinder cones southeast of the caldera (download the large image to see them more clearly).

Mount Paektu is particularly interesting because it is relatively distant from a tectonic plate boundary. Earth’s crust and upper mantle is broken into several large, thin, rigid plates that move relative to each other. Volcanoes often form near subduction zones—areas where different plates meet and one plate slides beneath another. But as you can see in the map of plate boundary data from the U.S. Geological Survey, the boundary between the Eurasian Plate and the Okhotsk Plate or the Philippine Plate is well over 500 kilometers to the east of Paektu.

The international research team confirmed the presence a layer of partially melted rock beneath Munt Paektu. But more research and monitoring is required before scientists can say much about the size of the magma reservoir or the likelihood that it will erupt.