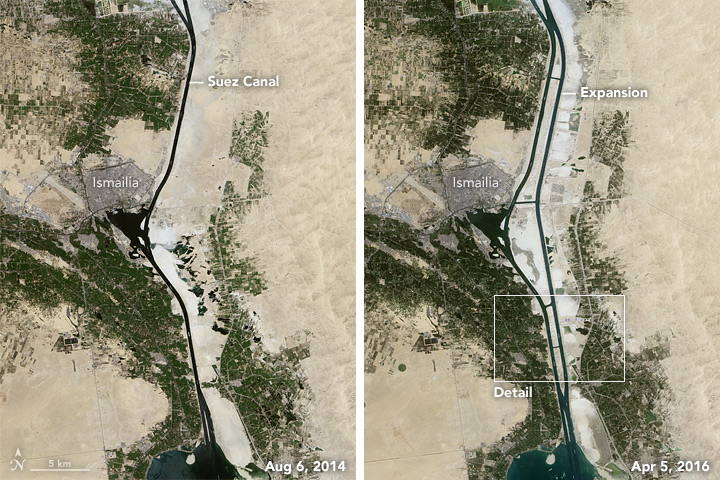 A key shipping route through Egypt recently received a major overhaul. The Suez Canal—the first artificial waterway connecting the Mediterranean Sea and the Red Sea—initially opened in November 1869 after 10 years of construction. The “New Suez Canal” opened in 2015 after just one year of construction.

Since its inception, the canal has been an economically important shortcut between Europe and Asia. The passage through Egypt meant cargo ships no longer had to sail around the southern tip of Africa. Expansion projects over the decades have helped the canal accommodate more traffic and larger ship sizes. The latest effort not only widened and deepened areas along the existing canal, it also added a 35-kilometer (22-mile) new canal that runs parallel to the old one.

The Operational Land Imager (OLI) on the Landsat 8 satellite acquired these images of the canal’s mid-section, where the project was focused. The left image shows the area on August 6, 2014, around the start of the expansion; the right image was acquired April 5, 2016, about nine months after the expansion was complete.

The older single-lane canal, including the north and south access channels, spans 193 kilometers (120 miles) from Port Said on the Mediterranean Sea to the Port of Suez on the Red Sea. Follow the canal south about 76 kilometers from Port Said, and you reach the city of Ismailia, centered in these images. At kilometer 95 you reach Great Bitter Lake, visible at the bottom of these images. The lake is one of the canal’s designated holding and passing areas. The time spent waiting in these bypass areas was eased with the addition of the new parallel canal, visible in the right image. 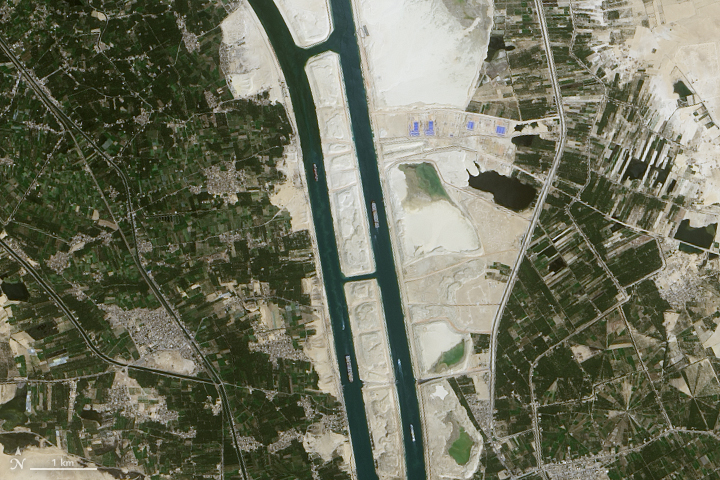 The second image shows a detailed view of the old and new canals in 2016. Wakes behind the ships show that those on the left side cruise southward while ships on the right move north. The new section of two-way traffic shortens the time spent waiting for ships to pass in the opposing direction. According to the Suez Canal Authority, completion of the new canal meant waiting times would drop to 3 hours instead of 8 to 11 hours, and transit times through the canal would become 11 hours instead of 18 hours.

Something you won’t see in images of the Suez Canal is a system of locks; it doesn’t have one. Many canals use locks to raise and lower ships between two areas with different water levels. The Mediterranean and Red seas, however, have similar water levels.