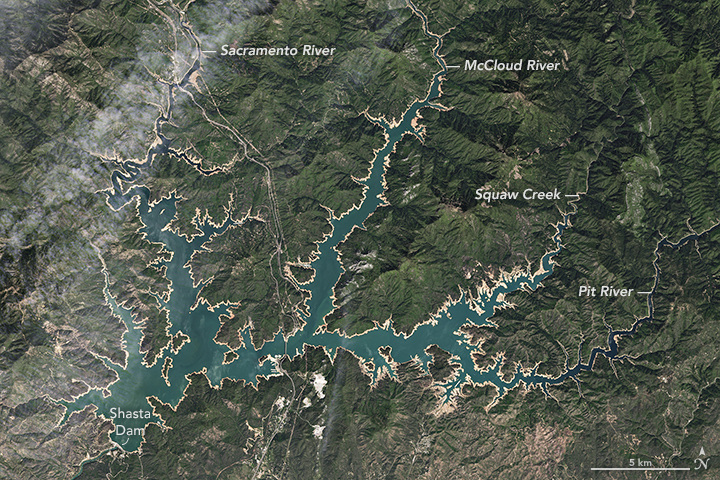 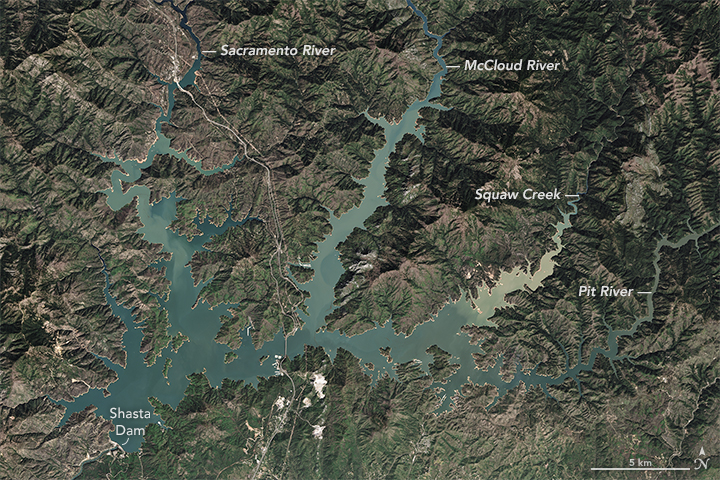 As the state of California has suffered through four years of drought, Shasta Lake has stood as a potent symbol of the water shortage. The largest reservoir in the state—a critical source of water for human consumption and for the fertile farmland of the Central Valley—dropped to just 29 percent of its capacity by December 2015. Water levels stood more than 100 feet below normal.

Now, after a rain-soaked March, Shasta Lake holds 109 percent of its long-term average supply for this time of year. As of March 29, the 21-mile long reservoir held 4.004 million acre-feet of water, well above the historical average of 3.668 million acre-feet (maf). The amount of water in Shasta Lake has tripled since December, and the lake level has risen 134 feet. As recently as February 29, water storage stood at 2.766 maf (83 percent of average); at maximum capacity, the lake holds 4.5 maf.

The Operational Land Imager (OLI) on the Landsat 8 satellite acquired these three natural-color images of Shasta Lake, near Redding, California. The first image was acquired on April 13, 2015, while the second was acquired on March 30, 2016—roughly the mid-point of the California water year. The line plot shows the changes in the elevation of the lake surface above sea level. The third Landsat image (below) shows Shasta Lake on November 23, 2015, near the lowest water level of the year. Light tan colors on the shorelines are new beach areas that were uncovered as water levels dropped. 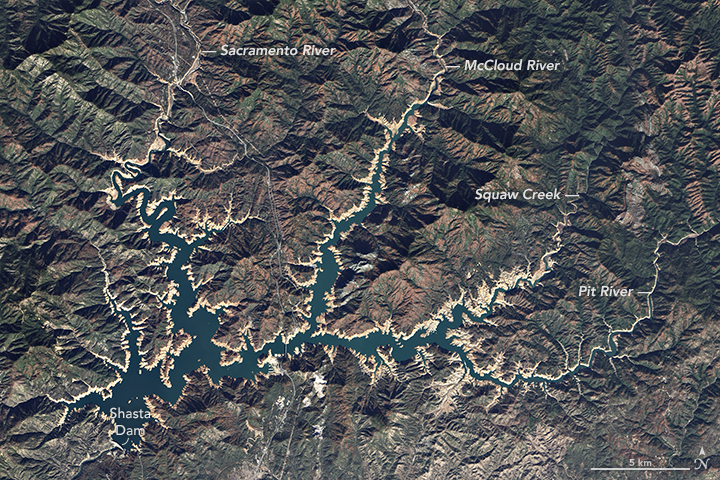 El Niño conditions in the Pacific have brought above-average precipitation totals to much of California, particularly near northern reservoirs. The second largest reservoir, Oroville, reached 69 percent of capacity (96 percent of historical average) in mid-March. Managers of Shasta and Oroville actually had to release some water through flood control systems due to heavy rain in late February and early March; that has not happened in five years.

While northern reservoirs appear to be in very good shape now, water resource managers and researchers cautioned that total water storage across the state is still below average and groundwater supplies have been severely depleted due to pumping during the drought.

“The unevenness of the precipitation is some concern, and the depth of remaining surface and subsurface storage drawdown from the drought remains sizable,” wrote University of California–Davis scientist Jay Lund on the California WaterBlog. “Overall, total surface storage in California is about 2.7 million acre-feet below average for this time of year (improved from an 8 maf surface storage deficit in October).”

The drought in 2015 depleted total water storage in California by 22 maf, or nearly a year’s worth of water use for agriculture, Lund added. “Storage is recovering during this wet season, but still has a good bit to go.”

“Sure, the main Northern California reservoirs—Shasta, Lake Oroville and Folsom Lake—are filling nicely, but many of California’s central and southern reservoirs are only at 40 to 60 percent of historical averages,” said Bill Patzert, climatologist at NASA’s Jet Propulsion Laboratory. “The bottom line is that much of California remains in serious drought, and many communities still hover near crisis conditions. For drought relief, El Niño was a stud in the north, but a dud in the south. It will take years to bust this long-lasting drought.”