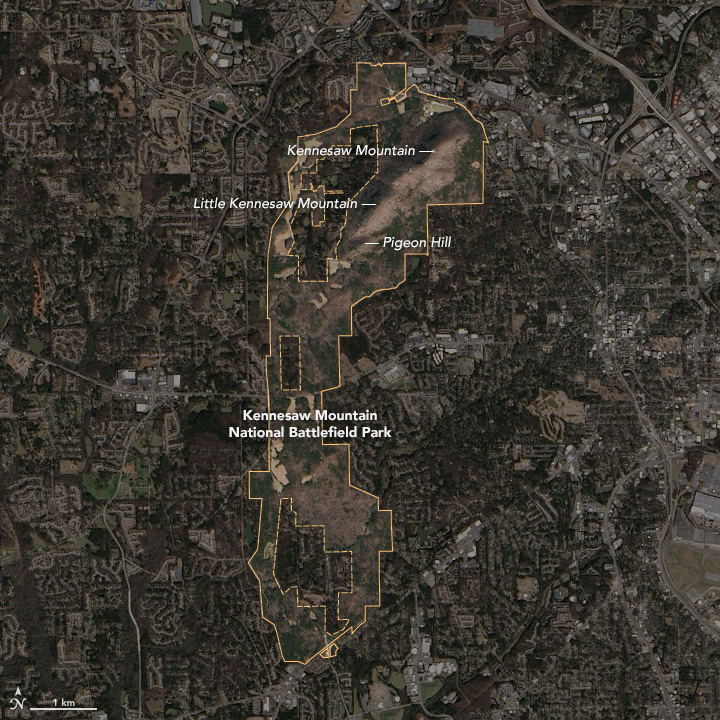 Just 25 kilometers (15 miles) northwest of downtown Atlanta, a long parcel of undeveloped forests and hills cuts through the metropolitan suburbs. But the site was not always so peaceful. During the summer of 1864, the 2,965-acres of this Civil War-oriented national park teemed with tens of thousands of men, horses, and cannons.

On February 5, 2016, the Operational Land Imager (OLI) on the Landsat 8 satellite acquired this image of Kennesaw Mountain National Battlefield Park in Georgia. The park protects land associated with a historic battle of the Civil War’s Atlanta Campaign.

The hilly terrain played a role in the battle that commenced on June 27, 1864. Confederate forces had established an arc-shaped line that included Kennesaw Mountain, Little Kennesaw Mountain, Pigeon Hill, and areas to the south. A head-on attack by Union forces failed, and thousands of soldiers were killed. Park visitors can still see historical features, such as trenches that were dug for infantry and cannons. The defeat, however, was not enough to stop Union troops from advancing toward Atlanta, cutting off railroad supply lines, and ultimately reaching the city in early September 1864.

As this satellite view shows, the mountain ridge is a major geographic feature of the area. Steep, rocky slopes of the range rise on average to about 550 meters (1,800 feet) above sea level. Outcrops and boulders are scattered among a mostly forested landscape. The image was acquired in winter, so vegetation appears less lush and green than it would in summer, when the deciduous trees have foliage. Still, historical surveys note that the landscape during the Civil War battle was even barer, as the summits had been cleared of trees.

Today, heavy urbanization—roadways and private residential housing—surrounds the park. Construction around the battlefield put additional pressure on the park, which stands as the largest free park in the heavily developed Atlanta metropolitan area. Park managers have had to balance preservation of the memorial landscape with the needs of nearby residents who use the space for recreation and as a commuting route.