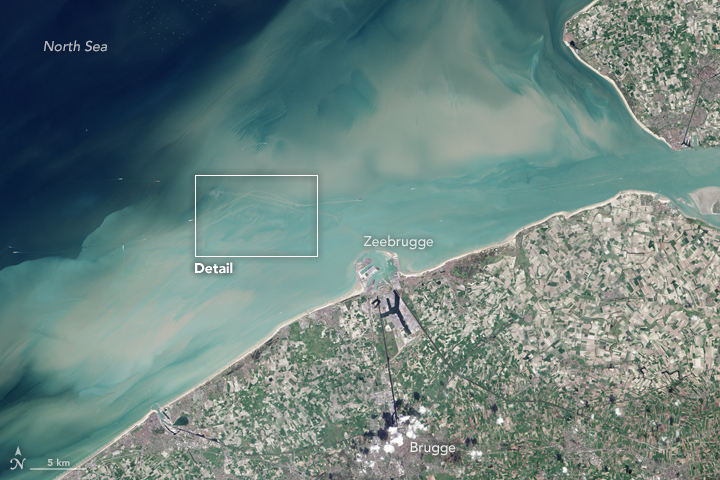 The planet’s oceans are littered with shipwrecks—perhaps as many as three million. Most have gone down close to shore, where hazards like rocks, reefs, other submerged objects, and vessel congestion are abundant.

While there is a romantic association between shipwrecks and buried treasure, there are more practical reasons to know the precise locations of sunken ships. Vessels may be of historical significance or—when the hard substrate of a ship has become an artificial reef—of ecological utility. Modern-era shipwrecks are also sources of pollution, leaking fuel and corroded heavy metals. And old shipwrecks can be navigational hazards to modern sailors.

Now archaeologists and navigators have a new tool for locating shipwrecks. Structures and vessels resting on the seafloor in near-shore waters can create telltale sediment plumes on the sea surface. Using data from the Landsat 8 satellite, researchers recently detected plumes extending as far as 4 kilometers (2.5 miles) downstream from shallow shipwreck sites. The study has demonstrated that Landsat and Landsat-like satellites can be used to locate these watery graves.

In a new study published in the Journal of Archaeological Science, researchers from Belgium and Northern Ireland have described a way to use freely available Landsat data to detect ships in sediment-laden coastal waters. Led by Matthias Baeye of the Royal Belgian Institute of Natural Sciences, the study was conducted in coastal waters off of Zeebrugge, Belgium (the port city for Bruges). The area is strewn with shipwrecks, and the surface waters are often laden with sediment. 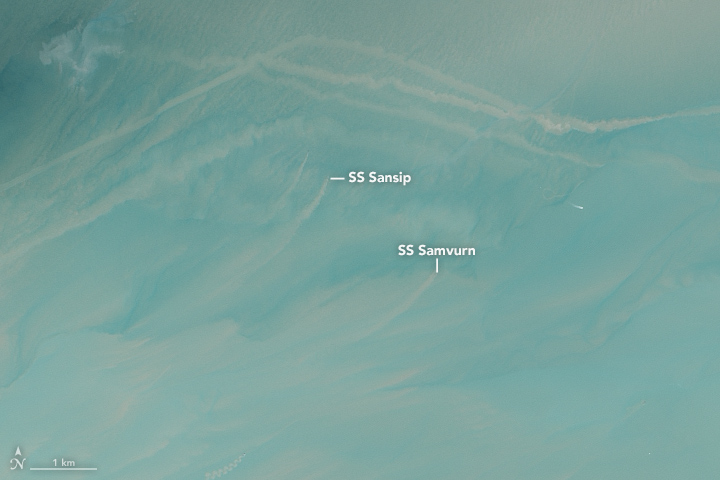 Because the area had previously been surveyed with multi-beam echo sounders, the researchers started with known locations for four fully submerged shipwrecks: the S.S. Sansip, a 135-meter (443-foot) U.S. “liberty ship” that sank after striking a mine in December 1944; the S.S. Samvurn, a similar ship that met the same fate the very next month; the S.S. Nippon, a ship that sank after a maritime collision in 1938; and the S.S. Neutron, a 51-meter (167-foot) steel cargo vessel that fell victim to an uncharted navigation hazard, presumed to be the S.S. Sansip. By combining tidal models and 21 Landsat 8 images, the researchers mapped sediment plumes extending from the wreck locations. They found that the ships that were not substantially buried in sediment created plumes that could be traced downstream during ebb and flood tides.

The images above were acquired by the Operational Land Imager (OLI) on Landsat 8 on April 1, 2014. In these natural-color views, long sediment plumes extend from the known wreck sites of the Sansip and Samvurn. (Note: For the study, Baeye and colleagues used atmospherically corrected Landsat 8 reflectance data from OLI bands 4 (red) and 5 (infrared).)

The researchers postulate that the exposed structures of the Sansip and Samvurn have created scour pits in the seafloor that fill with fine sediments (sand, clay, organic matter) during slack tides, the period of relatively still water. These scour pits become repositories from which sediments are re-suspended during flood and ebb tides. When these sediments reach the surface, they create their telltale plumes.

This means researchers should be able to find uncharted shipwrecks by mapping sediment plumes during various tidal stages and then following the plumes upstream to their point of origin. Such studies could be particularly fruitful in the North Sea, where World War II-era shipwrecks are plentiful. Mines, submarines, and warships targeted cargo ships sailing between Allied countries and Dutch and Belgian ports. The potential environmental impacts of these shipwrecks are substantial enough that the Council of Europe’s Parliamentary Assembly has recommended they be mapped and monitored.

Baeye and colleagues previously examined the motion of fine-grained sediments and the ecological impacts of offshore wind turbines, such as the London Array. They found that they could identify sediment plumes from the turbine pylons, and in later studies discovered that even small navigation pylons and buoys created sediment plumes in the sediment-laden coastal waters of Belgium. That realization sparked the idea to look for plumes created by shipwrecks—which they found.