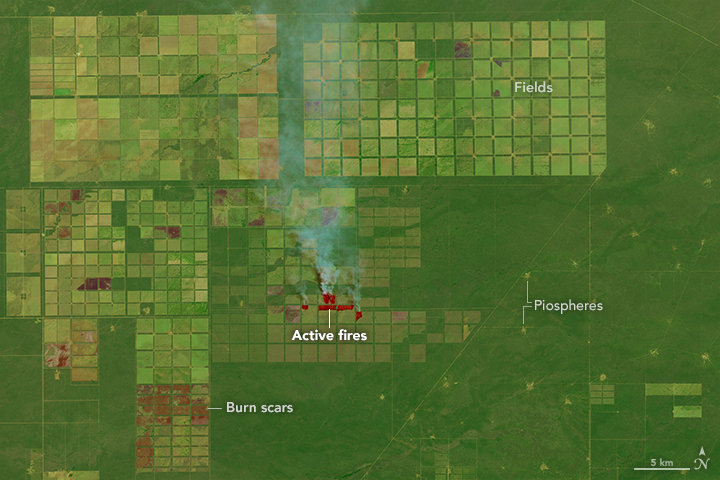 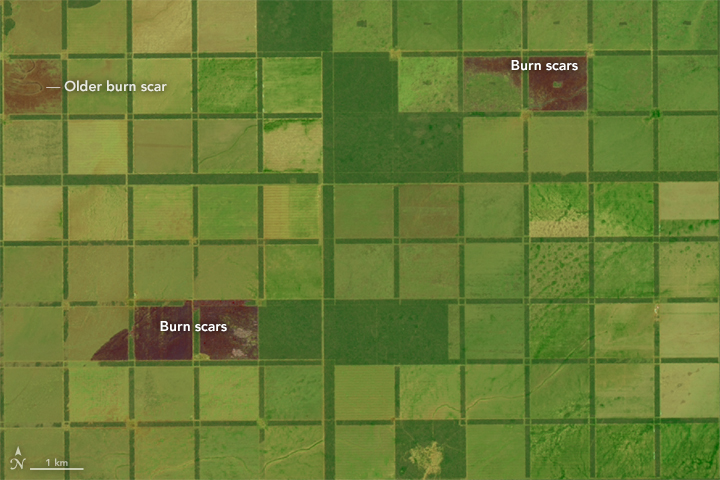 This Image of the Day is the answer to the February puzzler.

The chaco forests of northern Argentina spread across a vast outwash plain in the center of South America. Shrubs and hardwood forests thrive in the semi-arid region. For many years, puestos—small settlements centered around water sources—dotted the landscape.

But in the past decade, large-scale farm and ranch operators have cleared broad swaths of the chaco to make way for livestock and crops raised on an industrial scale. In fact, an analysis of data collected by several Landsat satellites suggests that Argentina’s chaco faces one of the fastest tropical deforestation rates in the world.

On October 15, 2015, the Operational Land Imager (OLI) on Landsat 8 captured this false-color image of fields, forests, and puestos in the Salta province of northern Argentina. The fields, most of which appear to be fenced, are arranged in a grid pattern. Fires are actively burning in a few sectors of the grid, likely lit by land managers trying to clear shrubs and trees to make room for livestock, timber, or crops. Fresh burn scars are dark brown; older burn scars are lighter brown. Over time, burned areas become light green and eventually dark green.

In the lower right of the image, several traditional puestos are visible as light green patches. These settlements usually consist of a few dwellings, farmhouses, and small-scale crops located near a well. Tree cover declines significantly at the center of a puesto because of heavy grazing by cattle, goats, and other free-ranging livestock near the water source. Ecologists call the distinctive grazing patterns piospheres.

Brandon Bestelemeyer, a U.S. Department of Agriculture ecologist, began his research career two decades ago studying how competing land management systems—specifically whether people in local puestos kept grazing animals fenced—affected ant communities in this area. Other ecologists looked at the same question for reptiles and birds.

Since then, large sections of the chaco forests where Bestelemeyer did his research have been converted into large-scale farms. “My master’s thesis is now an anachronism,” he noted in a blog post and article for Rangelands. “Time will tell, but the pressure to convert the remaining forest will only increase. I’ve thought about going back to Salta to see what is happening firsthand, but there is no going back to the Chaco I once knew.”