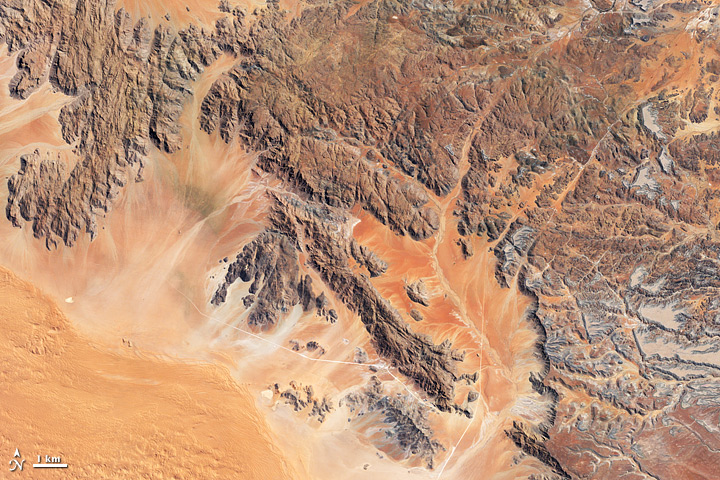 The Republic of Namibia, along southern Africa’s Atlantic coast, can be divided into three general landscape categories. The westernmost part of the country is the Namib Desert, kept hyper-arid by the Atlantic’s cold Benguela Current. Running north to south through the middle of the country is the Central Plateau, home to the country’s arable land. In the east is the Kalahari Desert. Throughout southern Africa, the long line of broken cliffs and rock outcrops, called the Great Escarpment, separates coastal deserts from high-elevation inlands, with land levels rising swiftly.

On January 10, 2000, the Enhanced Thematic Mapper plus (ETM+) on NASA’s Landsat-7 captured this image, just east of the Namib Desert’s sand dunes. Iron oxides lend the sand in this image a deep orange color. Pushing above the low-lying sand are rocks, varying in color from charcoal to brick to tan to nearly white. Near the bottom edge of the image, in the east, a meandering line of rock marks the edge of a sand-filled basin. East of the basin edge, rocks form dendritic shapes, likely evidence of water’s activity in the distant past. To the north and west, the rocks appear more rugged. Drifting sand dunes appear in the southwest.

As Namibia’s coastal plain gives way to the Great Escarpment, overall temperatures and daytime temperature ranges increase, while coastal fog decreases. Rainfall is variable in this part of the world, and droughts can last years. Yet this rocky region supports a little more vegetation than the sandy coastal desert.