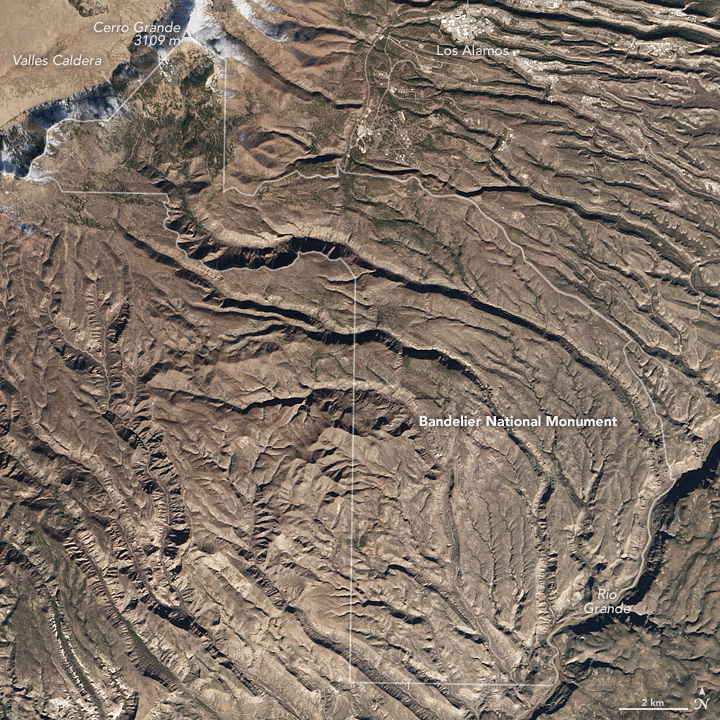 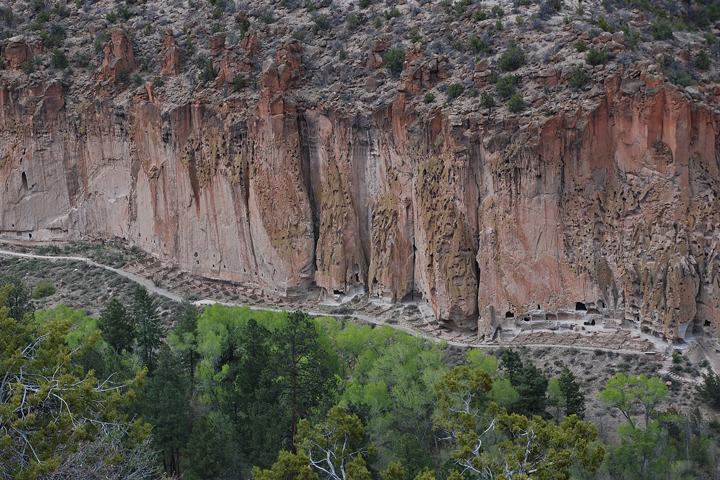 What’s the difference between a national park and a national monument? Parks—established by acts of Congress—are usually larger and preserve a variety of resources. In contrast, monuments—created by presidential proclamation—preserve at least one significant resource. At Bandelier National Monument in New Mexico, that includes relics of human civilization that date back 11,000 years. An ancestral Pueblo people carved dwellings and petroglyphs into the cliffs, and their handiwork still persists today.

The second image was acquired by National Park Service photographer Sally King. It shows the tall walls of Frijoles Canyon and some dwellings along its base—a site called Long House.

These remnants of earlier human presence are too small to be spotted from space, but you can get a sense of the landscape that made it a favorable place to build. The cliffs are soft volcanic tuff, composed of consolidated ash from the eruption of the Jemez Volcano more than 1 million years ago. The volcano’s summit collapsed and formed the Valles Caldera, visible in the top left corner of the Landsat image.

Rising from the rim of the caldera, and marking Bandelier’s northwestern boundary, is the snow-capped summit of Cerro Grande—the monument’s highest elevation at 3109 meters (10,199 feet). From that mountaintop down to Bandelier’s southeastern boundary on the banks of the Rio Grande, the land loses almost a vertical mile of elevation. Most of the landscape is designated as wilderness area, and it is lined with deep canyons sharply eroded from the plateaus.

The landscape appears more stark and brown in the satellite image than it might at other times of the year. “The winter scene really lets you see the landscape without much vegetation softening it,” said Kay Beeley, an NPS cartographic technician for Bandelier National Monument.

“This image catches Bandelier at one of the least active times of the year for vegetation growth,” said Craig Allen, a U.S. Geological Survey ecologist at Bandelier. “The vegetation is quite dormant at all elevations in December due to relatively cold winter temperatures.”

But the landscape didn’t always look quite this brown in wintertime. According to Allen, a series of major fires in 1977, 1996, 2000, and 2011, have eliminated a vast majority of the mature evergreen trees that once grew in Bandelier’s mid- and upper elevations. As a result, large areas are now dominated by deciduous shrubs, grasses, and forbs, which are leafless or dormant in December. “Otherwise,” Allen said, “there would be a lot more evergreen tree cover.”

Bandelier National Monument and the National Park Service both celebrate their centennial in 2016 (February 11 and August 25, respectively).