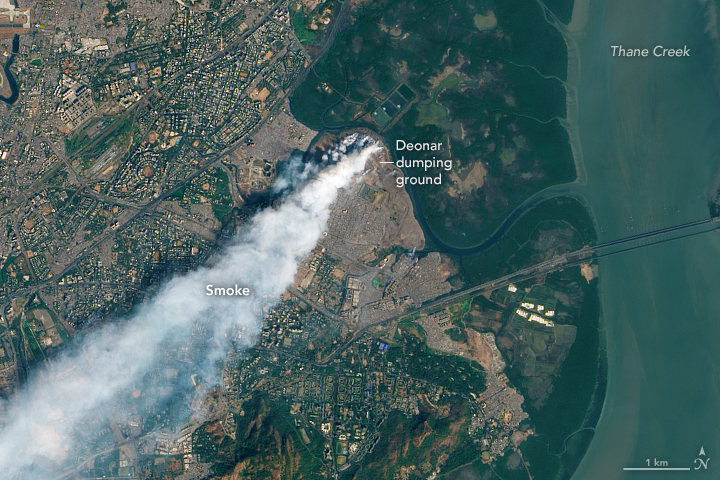 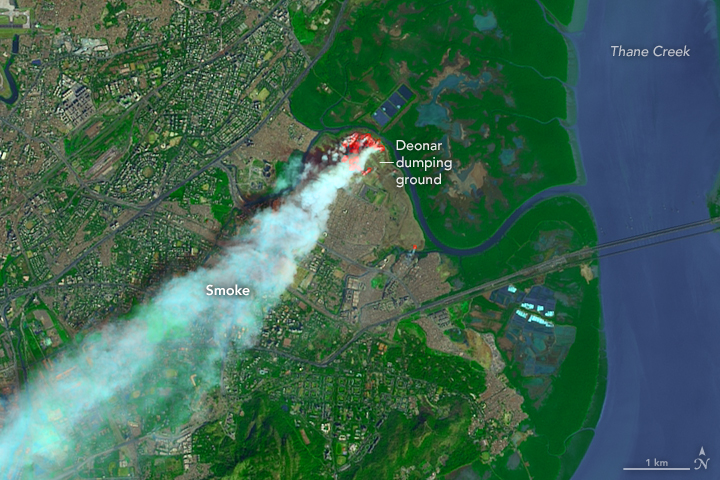 In January 2016, fire raged in the largest landfill in the Indian city of Mumbai.

Located in an eastern suburb, the Deonar dumping ground stretches across 132 hectares (326 acres) near Thane Creek. It receives more than 3,700 metric tons (8.1 million pounds) of trash per day, about one-third of the city’s waste. With piles of trash that rise up to 30 meters (100 feet) tall—the equivalent of a nine-story building—the landfill has literally become a mountain of trash.

Beginning on January 27, 2016, sensors on the Terra, Aqua, and Suomi NPP satellites began to detect evidence of smoke and fire at the landfill. The fires continued to burn for four days, sometimes sending smoke into densely populated neighborhoods. In some parts of the city, the smoke pushed air pollution to the highest level recorded since air quality data monitoring began in June 2015, according to the Hindustan Times. For four days, more than 70 schools closed because of the smoke.

The Operational Land Imager (OLI) on Landsat 8 captured a natural-color image (upper) of the burn scar on January 28, 2016. Smoke is streaming southwest into Baiganwadi, a neighborhood near the landfill. The false-color image (lower) also was acquired by OLI, but it shows the location of the hot spots more clearly because it includes observations from the shortwave infrared portion of the electromagnetic spectrum.

It is not clear why or how the fires started, though some news reports suggest they may have been set intentionally. Fires in landfills are often difficult to extinguish because they burn through methane, plastic, and other highly flammable substances.