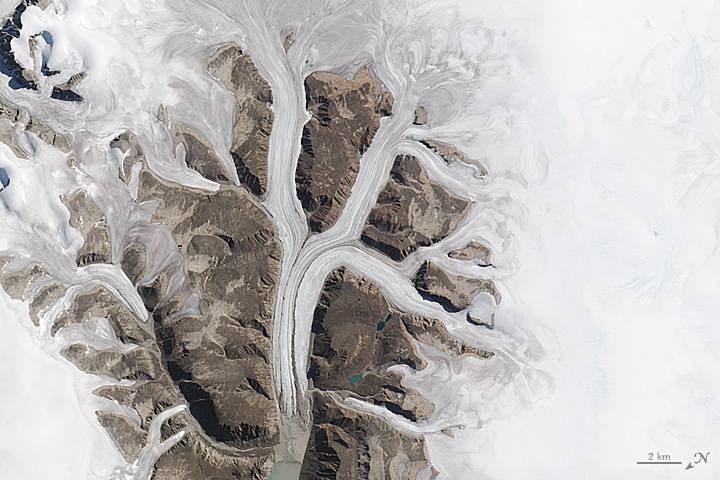 On land, the Kizimen, Kronotsky, and Krasheninnikov volcanoes line up along Russia’s Kamchatka Peninsula. Elsewhere, the Krakatau and Kilauea volcanoes rise from the Indian and Pacific oceans, respectively.

But not all land features that begin with K are fiery in nature. Karst terrain—consisting of springs, caves, and sinkholes—covers 13 percent of the land surface in southeast Asia, and 20 percent in the United States. In other areas where ice once flowed, the evidence of a glaciated past is visible in kettle lakes that pockmark the landscape.

What about Earth’s oceans? Kelp can grow up to 35 meters (115 feet) tall, forming dense underwater forests that are important habitat and nurseries for other plants, marine mammals, and fish.

In the atmosphere, you might find katabatic winds moving down from mountains and hills into valleys and fjords. The phenomenon occurs, for example, over Baffin Island in Nunavut, Canada. Winds from high elevations are funneled down through the area’s narrow fjords. On August 3, 2015, the Operational Land Imager (OLI) on Landsat 8 captured this natural-color image of fjords and glaciers in North Baffin Island’s Sirmilik National Park.