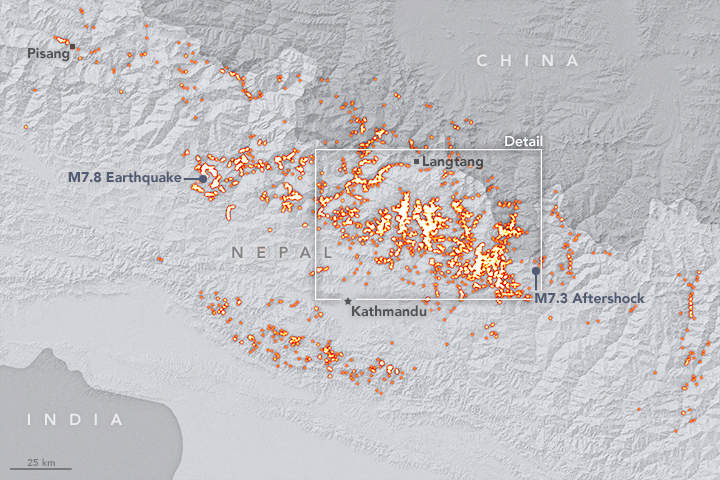 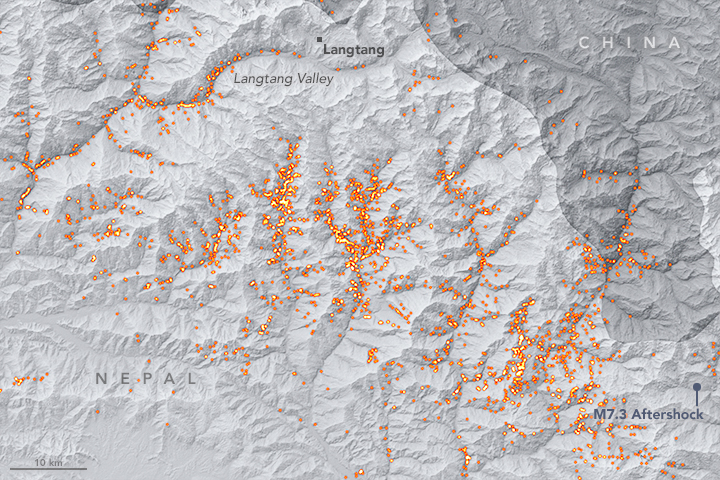 Taking Stock of Landslides after the Gorkha Earthquake

When the Earth rumbled in the Gorkha region of Nepal in April 2015, the quake sparked aftershocks and induced dangerous hazards—including more than 4,000 landslides. Yet all of those slides were fewer and, in some ways, less damaging than expected.

Starting immediately after the magnitude 7.8 earthquake on April 25, a group of scientists organized themselves and donated their time to sift through satellite imagery and locate potentially hazardous terrain. The group redoubled their efforts when another magnitude 7.3 earthquake on May 12 triggered more landslides.

In total, this volunteer effort—led by glaciologist Jeff Kargel of the University of Arizona and coordinated with NASA—identified and mapped 4,312 landslides in the weeks following the Gorkha earthquake. The map above shows an inventory of the landslides that were mapped between April 25 and June 10. Brighter colors indicate areas with more landslides. The count stopped in June because of the onset of the monsoon season; scientists wanted to distinguish between earthquake-related landslides and those triggered by rain.

To pinpoint the locations of slides in remote areas far from the population centers of Nepal, scientist-volunteers analyzed satellite imagery acquired before and after the earthquake by 10 satellites operated by four countries. NASA data came from the Landsat satellites (joint with the U.S. Geological Survey), the Earth Observing-1 satellite, and the Advanced Spaceborne Thermal Emission and Reflection Radiometer (ASTER) on the Terra satellite. The team also reviewed media reports, eyewitness photography, field assessments from helicopters, and existing image mosaics and topographic information available through products like Google Earth.

By identifying where landslides have occurred, researchers can predict where the ground might be unstable and prone to additional hazards. In addition to landslides, the team found and mapped lakes that had been dammed lakes and remote villages that were affected.

NASA shared this information with a regional intergovernmental organization, the International Center for Integrated Mountain Development (ICIMOD) in Nepal. ICIMOD shared these findings with the Nepalese prime minister and other government officials, as well as scientific agencies, in order to make informed decisions about evacuating people and providing relief support.

The team found that the 4,312 landslides after the Gorkha earthquake were far fewer than occurred after similar-magnitude quakes in other mountainous areas. In addition, the team surveyed 491 glacial lakes and saw only nine that were affected by landslides. Satellite images did not reveal any flooding from those lakes.

“It was a really bad earthquake—over 9,000 fatalities in four countries, primarily Nepal,” said Kargel. “As horrific as this was, the situation could have been far worse for an earthquake of this magnitude.”

The research team is now investigating why there were fewer landslides than expected and why they are distributed as they are. One possible explanation is that the quake caused much less shaking at the surface than other quakes of similar magnitude.

The researchers also found that the movement of Earth’s surface influenced where the landslides occurred. Co-author Eric Fielding of NASA’s Jet Propulsion Laboratory used satellite radar imagery to create a map of the terrain that dropped and rose during the earthquake. The results revealed that Earth’s surface dropped almost 1.4 meters (5 feet) in some places, and rose as much as 1.5 meters (5 feet) in others. By overlaying Fielding’s map with the landslide map, the scientists found that most of the documented landslides occurred in areas where the ground surface dropped, rather than in areas where it was uplifted. That pattern was unexpected and hasn't been observed before, Kargel said.

Read more about the Nepal earthquake study by clicking here.