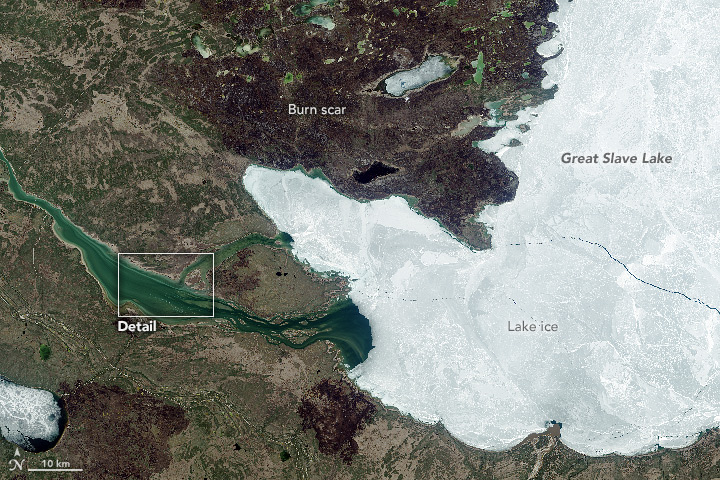 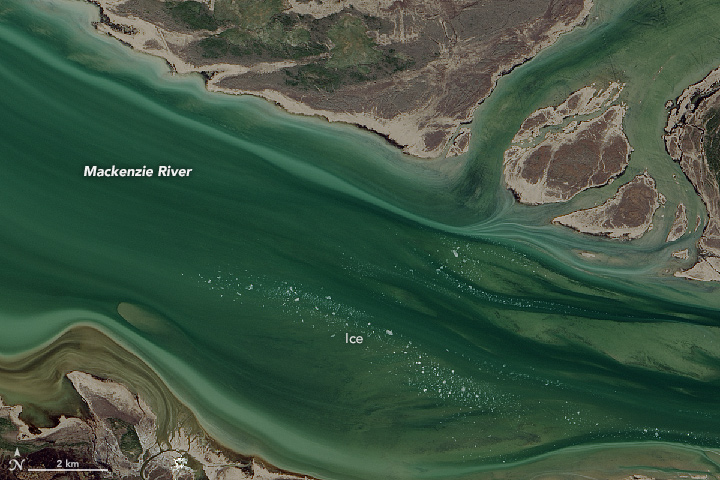 The Mackenzie River—North America’s largest northward flowing river—drains a basin that spans one-fifth of Canada’s total land area. Each year, the Mackenzie delivers about 325 cubic kilometers (78 cubic miles) of fresh water to the Arctic Ocean. That’s about 7 percent of the fresh water that flows into the entire Arctic Ocean each year.

Researchers continue to discover how the addition of fresh water affects the Arctic Ocean. For example, at the delta of the Mackenzie, river outflow has been shown to alter the ice in the Beaufort Sea.

But where did that water get its start? These images show a segment of the Mackenzie River about 1,600 kilometers (1,000 miles) upstream from the delta, where the river originates at Great Slave Lake in Canada’s Northwest Territories. The Operational Land Imager (OLI) on Landsat 8 captured natural-color views of the lake and river on May 13, 2015. According to satellite-based estimates, that’s about the date in springtime when ice on the lake begins to melt. The close-up view (second image) shows pieces of ice already adrift in the river. The lake is typically ice-free by the beginning of June and stays that way until mid- to late-December. However, conditions on the lake can vary dramatically from year to year.

Great Slave Lake is one of the largest freshwater lakes in the world, with a surface area of about 28,600 square kilometers (11,000 square miles). It’s a deep lake, too, with an average depth of 88 meters (290 feet). Because of its size, the lake can store plenty of heat during the open water season—the period when the lake is ice-free.

This subarctic environment is dotted with numerous wetlands and lakes. Just north of Great Slave Lake, the tree line meets a band of patchy, discontinuous permafrost that stretches across northern Canada. Forested areas around the lake have been known to burn during the fire season. A burn scar on the lake’s western shore is still visible in this image.