Deluge in the Amargosa and Death Valleys

In October 2015, a series of storms passed across the U.S. Southwest and brought a deluge of rain to the area‘s desert valleys.

The animation above shows satellite-based estimates of rainfall from a particularly large storm that passed over the area on October 18. The rainfall data are from the Integrated Multi-Satellite Retrievals for GPM (IMERG), a product of the Global Precipitation Measurement mission. Green-white colors represent the largest rainfall totals, which in some areas reached upward of 70 millimeters (3 inches) during the 24-hour period displayed in the animation. These regional, remotely-sensed estimates may differ from the totals measured by ground-based weather stations.

Some areas of Death Valley National Park in California were hit particularly hard. This video shows a ground-based view of damage incurred by the park. According to the Los Angeles Times, 2.7 inches of rain gave rise to flash floods that damaged Scotty‘s Castle, a popular park landmark. But as the animation shows, areas east of the park also saw high accumulations, including Amargosa Valley in southwestern Nevada. 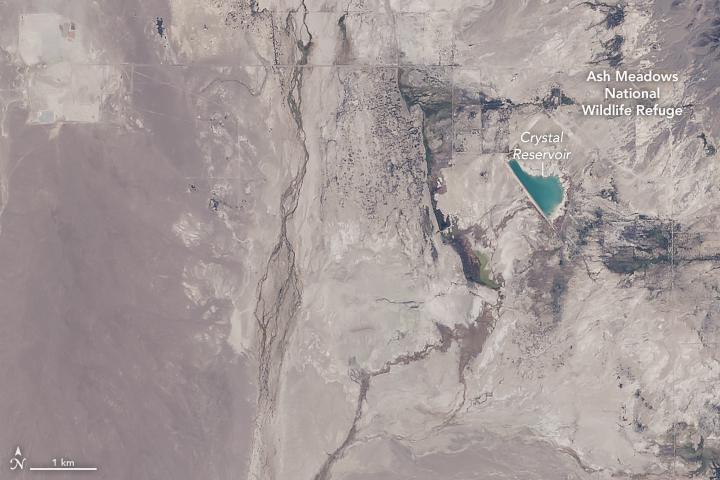 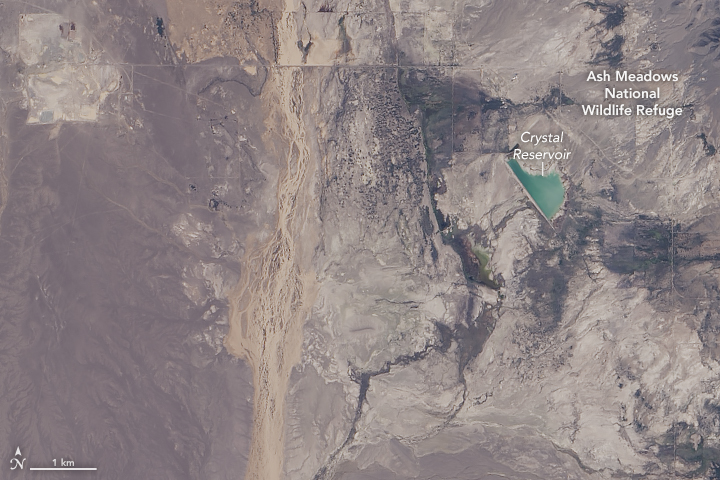 The natural-color image pair above shows an area within Amargosa Valley before and after the storm, on October 3 (top) and October 19 (bottom). Both images were acquired with the Operational Land Imager (OLI) on Landsat 8.

Comparing the two images, we can see that the shoreline of Crystal Reservoir changed somewhat after the storm, and the water looks lighter and rich with sediment. Carson Slough, west of the reservoir and running vertically through the image, is brimming with light brown, muddy water. The slough drains the Ash Meadows National Wildlife Refuge—the largest remaining oasis in the Mojave Desert. Severe flooding and road damage closed the refuge, but it reopened in less than a week.

“The mud and debris was naturally cleared out of many of the springs within 24 hours, especially in the higher flowing springs,” the refuge noted on Facebook. “The natural recovery was quite amazing.”