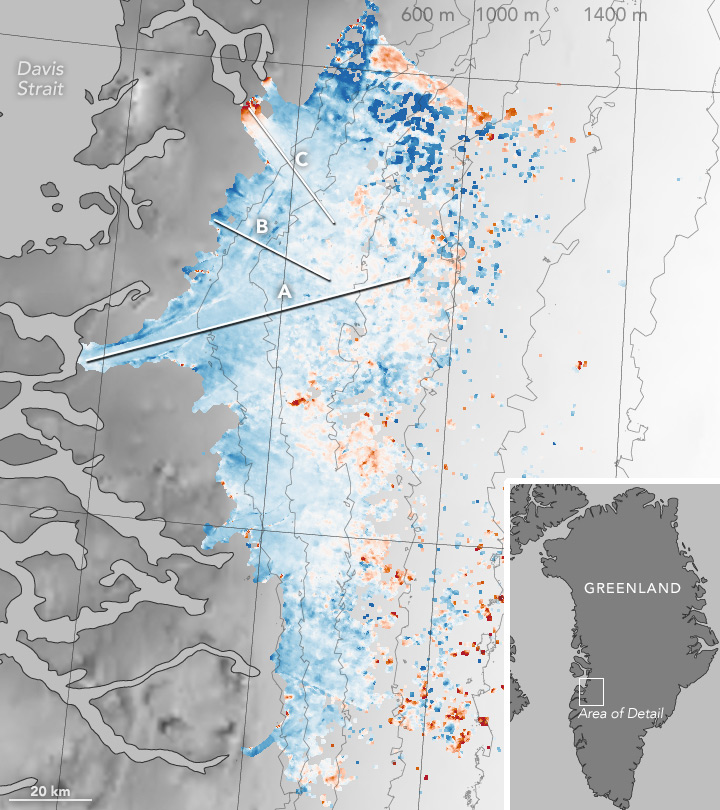 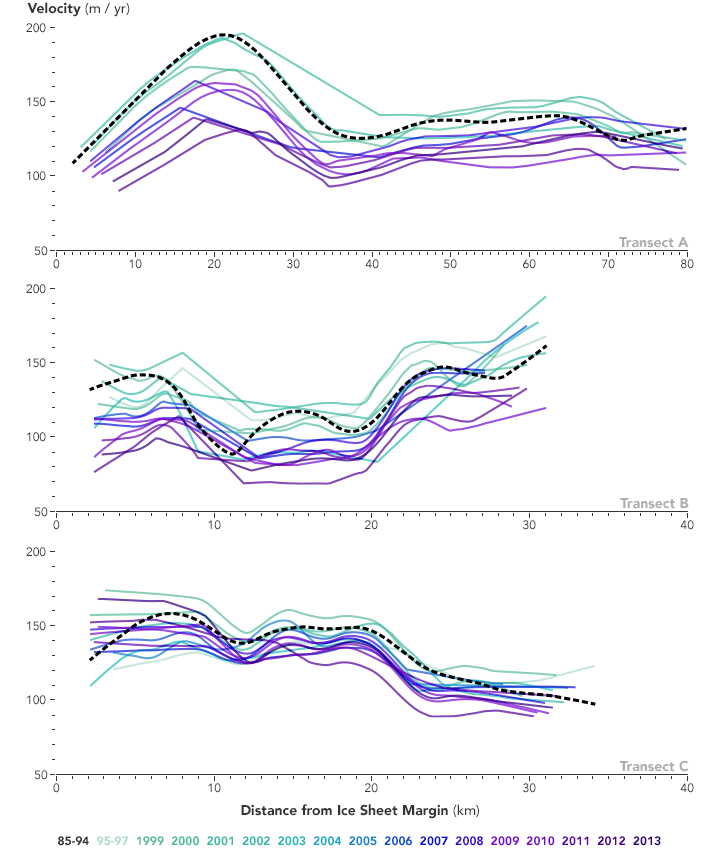 Ice sheets are in perpetual motion, moving constantly downslope like water draining to a river. As global temperatures have climbed, positive feedback loops have accelerated the loss of land-based ice that touches the sea. But new research shows that a negative feedback loop is slowing the sections of the Greenland Ice Sheet that end on land—a sliver of good news for sea level rise.

“Our latest results show that a large sector of the Greenland Ice Sheet that terminates on land has slowed down during the last decade—during a period of sustained warming,” explained lead author Andrew Tedstone, a glaciologist at the University of Edinburgh. “This suggests that further increases in melting will not cause these land-terminating margins of the ice sheet to speed up.” The research was published on October 29, 2015, in Nature.

The Greenland Ice Sheet is an Alaska-sized block of ice that could raise sea levels by 7 meters (23 feet) if it all melted. Measuring the melt rate and motion of the ice sheet helps scientists understand how and when it will affect sea level rise.

The overall mass of the Greenland Ice Sheet has decreased in recent decades as global temperatures have risen, and 60 percent of the loss is due to surface melting. This melt water typically makes its way to where the ice sheet meets the bedrock, where it can “grease the track” so that the ice sheet moves faster toward the sea.

Many scientists have advanced the idea that this process is a positive feedback, with greater amounts of melt water causing faster movement of the ice sheet. More recently, however, scientists learned that this motion is seasonal. A large volume of melt water in summer leads to greater lubrication of the ice sheet base, speeding up its flow as expected. But by the end of summer, the melt water has established efficient drainage systems that lessen the impact of the water under the ice sheet (the “grease on the tracks”), and the flow slows down.

The long-term impact of this two-tempo dance has been unclear. Has the ice motion been speeding up, slowing down, or just keeping the status quo?

To peer back in time, the team turned to the Landsat satellites. Using 475 image pairs from Landsats 5, 7, and 8, they analyzed ice sheet motion between 1985 and 2014 across an 8,000 square kilometer (3,100 square mile) region of southwest Greenland where the glaciers and ice sheets end on land. By tracking stable features, such as crevasses, they established that there was a clear regional slowdown.

The slowdown is visible in the map above. Blue areas represent where the ice sheet slowed down; it is measured as a percent change of ice velocity for the period 2007–2014 compared to a 1985–1994 reference period. Reds show areas are where the ice sped up. The velocity of ice along three transects (A, B, and C) are shown in the charts below the map.

The slowdown occurred despite a corresponding 50 percent increase in surface meltwater production between the two periods. This confirmed that there was a slowdown of the land-terminating portions of the ice sheet, despite warming, and a negative feedback loop was at work. To find out more about the cause of this negative feedback loop, read the full Landsat science brief.