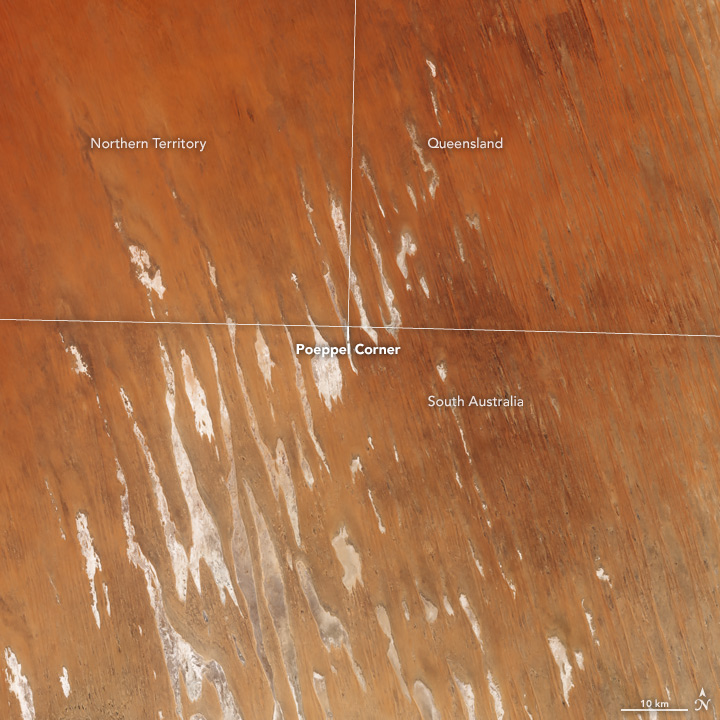 The novelty of standing in more than one state at a time has long drawn tourists to places like the Four Corners, the only place in the United States where four states meet. In central Australia, there is a similar junction known as Poeppel Corner. And getting there requires a long journey through the remote Simpson Desert.

On August 30, 2015, the Operational Land Imager (OLI) on Landsat 8 acquired this image of Poeppel Corner. The point marks the location where the vertical boundary between the Northern Territory and Queensland meets the northernmost boundary of South Australia. The nearest town is Birdsville, 177 kilometers (110 miles) to the east.

The borders do not trace the contour of any natural feature; rather, they follow lines of latitude and longitude. In 1880, South Australian surveyor Augustus Poeppel marked the junction at 26 degrees South and 138 degrees East.

Natural features are by no means absent. Long, parallel sand dunes run diagonally across the entire area. The dunes were formed as a result of prevailing winds from the south-southeast that sculpted the sand on top of an ancient alluvial plain. White and tan areas between the dunes are clay and salt pans.

Rainfall is not common in this desert, which spans 140,000 square kilometers (54,000 square miles) and is some of the driest land in Australia. When a torrential rainstorm occurs, as it did in 2009, sheets of water pour across the basin and drain toward the typically bone-dry Lake Eyre (south of this image).