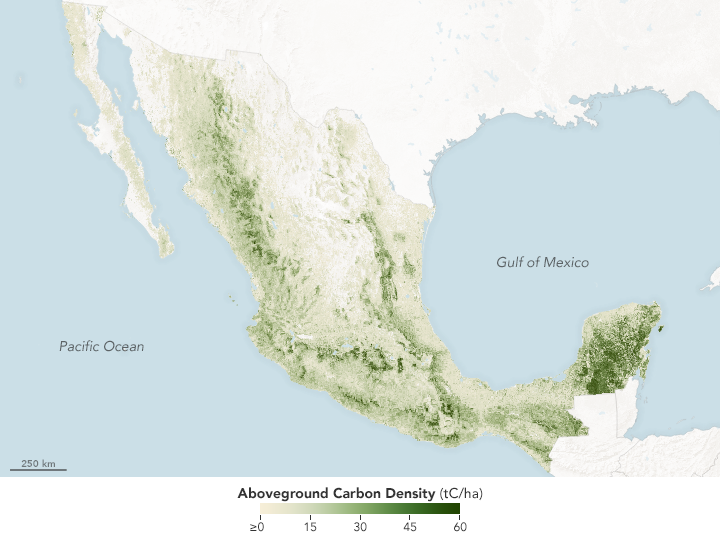 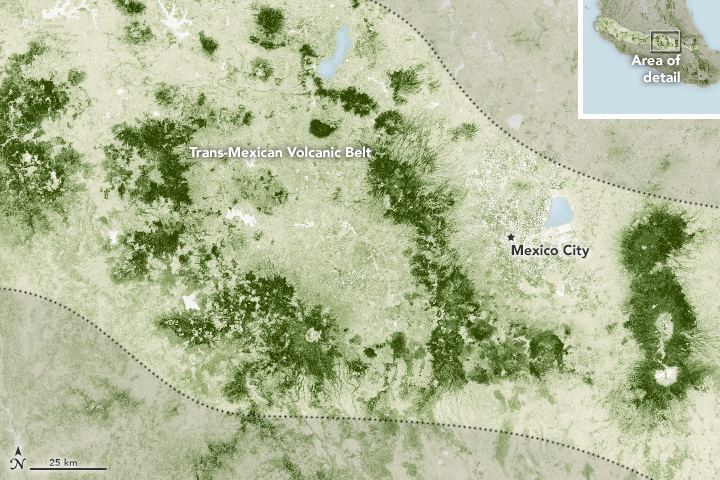 Counting the Carbon in Mexico’s Forests

For the past several decades, conservationists and governments have worked to reduce deforestation around the world. Growing, healthy trees are a natural sponge for some of the carbon dioxide in the atmosphere, and tree planting and preservation has often been proposed as a way to counter the effects of human emissions of CO2. On the other hand, when forests are cleared, it not only reduces the carbon-storing power of the landscape, but it adds to the carbon problem because trees are often burned.

But how can governments get a handle on how much carbon is being gained, lost, or stored by the landscape? Several scientific groups have approached the problem by counting the trees and the carbon via satellite and sophisticated computer modeling.

The maps above depict the concentration of biomass—a measure of the amount of organic carbon stored in the trunks, limbs, and leaves of trees in Mexico. The darkest greens reveal the areas with the densest, tallest, and most robust forest growth. The maps were assembled from data provided by Mexico’s National Forest and Soil Inventory (INFyS), Mexico’s National Forestry Commission (CONAFOR), and the Woods Hole Research Center (WHRC), as part of the Mexico REDD+ Alliance (which is funded in part by the U.S. Agency for International Development).

To assess the forest cover of Mexico, the research team pulled together a combination of ground-based and satellite measurements. Broad measures of forest density, height, and structure were derived from observations by the Landsat series of satellites, NASA’s Shuttle Radar Topography Mission, and the PALSAR radar backscatter instrument on Japan’s ALOS satellite. Those space-based measurements were then melded with data from ground-based inventories of trees on more than 26,000 plots across Mexico.

The combination allows scientists to model where the landscape is tree covered and roughly how much carbon those forests store. (The WHRC team previously made a similar survey of biomass in the United States.) It is nearly impossible to monitor tree cover solely from the ground because of the vast amount of money and time required, not to mention the remoteness of some forests. So the combination of ground reconnaissance and satellites allows the research and conservation community to observe forest change in a more cost-effective way.

According to the United Nations Food and Agriculture Organization (FAO), Mexico has about 65 million hectares of forest spread across 33 percent of its total land area. Compared to many other nations, Mexico has done reasonably well at reducing deforestation in the past decade, lowering the rate by 55 percent. Having a carbon biomass map will help the Mexican government in tracking progress for the Reducing Emissions from Deforestation and forest Degradation (REDD+) program.

“This data set is being used to estimate carbon storage in Mexico’s forests at the regional and local level,” said José Maria Michel, an FAO official who works with the CONAFOR/Mexico Norway Project. “With this information, we have the opportunity to improve forest monitoring for REDD+ and to better assess forest mitigation policies at the landscape level.”