The Waters are Rising on NASA’s Shores

This Image of the Day is an excerpt from our feature story: Sea Level Rise Hits Home at NASA.

As the ocean has warmed, polar ice has melted, and porous landmasses have subsided, global mean sea level has risen by 8 inches (20 centimeters) since 1870. For more than 130 years, hundreds of tide gauges have been used to measure sea level around the world; satellite measurements now complement that historical record. What they both show is that the rate of sea level rise is faster now than at any time in the past 2,000 years, and that rate has doubled in the past two decades.

A rise of a few inches over a few decades does not sound like much. But sea level does not rise evenly; it piles up more in some places because of natural wind and current patterns. And turbulence matters. Imagine a bathtub with a child sloshing around in it. Waves can roll up one side and then the other, sometimes splashing over the brim. The higher the flat-water line (sea level), the greater the chance that the water will slosh out of the basin when it is stirred up by storms and winds.

Sea level also matters in a horizontal direction. A rule of thumb is that 1 inch of vertical change in sea level translates into 100 inches of horizontal loss on a flat beach or marsh. In this way, a little bit of sea level rise can translate into a lot of water moving inland when there are storms or abnormally high tides. “Sea level is important because it gradually moves the high-tide line farther up the beach and closer to buildable land,” said John Jaeger, a coastal geologist from the University of Florida. “It also allows storm surges to penetrate farther inland.” 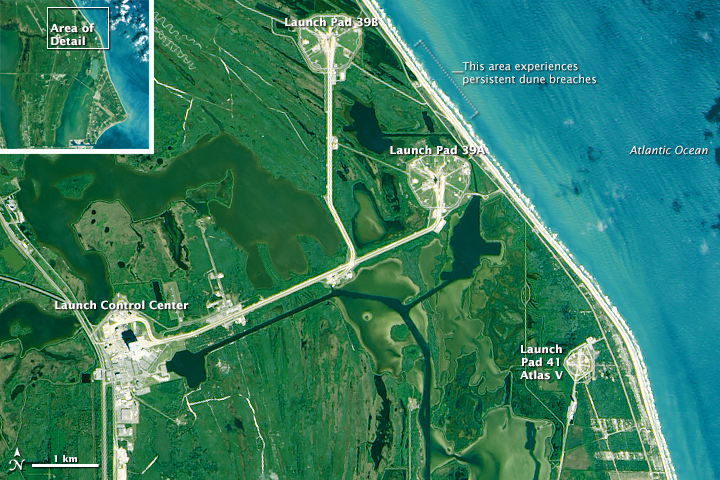 “We consider sea-level rise and climate change to be urgent,” said Nancy Bray, spaceport integration and services director for Kennedy.

Based on historical records and aerial photos, the beach in front of Kennedy has thinned and moved inland by as much as 200 feet (60 meters) since the 1940s. The losses have been most acute and persistent along a stretch near the center’s two most prized launch pads, Complex 39A and 39B. The Atlantic Ocean stands less than a quarter mile from both.

In response to the persistent storm damage, Kennedy facilities managers enlisted Jaeger and his University of Florida colleague Pete Adams to figure out why sand dunes near Complexes 39A and B are so persistently being washed away. For five years, Jaeger, Adams, and graduate students pulled GPS mapping gear up and down 6 miles of beach at least once a month—more often in the wake of storms. They found that the beaches were retreating due to the shape of the seafloor just offshore, where gaps between the sandbars channel wave energy toward certain areas. But they also found sand piling up (accreting) in other areas, mostly near Launch Complex 41. The beach is migrating south, even if NASA’s infrastructure is not.

In the aftermath of Hurricane Sandy in 2012, Kennedy Space Center crews piled up 90,000 cubic yards of sand to create a 1.2-mile-long dune. So far, it has provided protection against storm and wave inundation. In the longer run, Bray and colleagues are working on what they call a “managed retreat.” They are building up the shore defenses, while also earmarking land farther inland for additional launch infrastructure should the demand materialize. 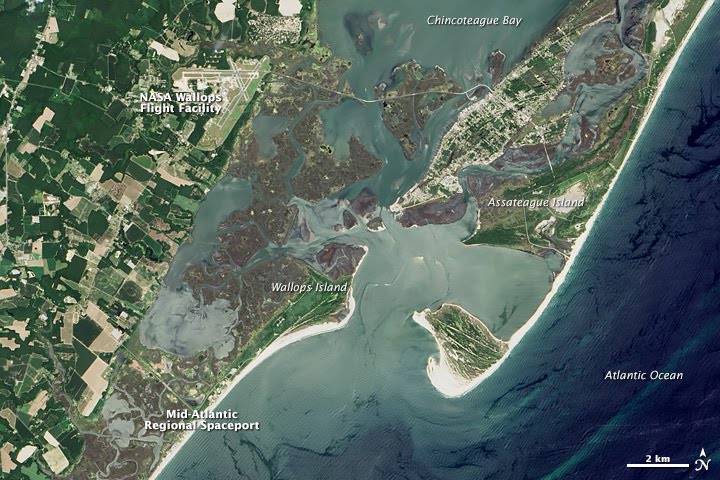 The sea level concerns at Kennedy Space Center are the most visible, but the issue touches most NASA centers. Wallops Flight Facility, carved out of coastal marshland on the eastern shore of Virginia, is most like Kennedy in its vulnerability.

In the past 15 years, Wallops has been redeveloped for launching NASA and commercial rockets, with at least $1 billion in new spaceflight infrastructure being set up along Atlantic shores. But the facility sits amidst a barrier beach system, and those sand bars want to move. Erosion and beach migration have been reshaping the surrounding barrier islands. Assateague has been losing 10 to 22 feet (3 to 7 meters) of beach per year; Wallops Island has been losing about 12 feet. 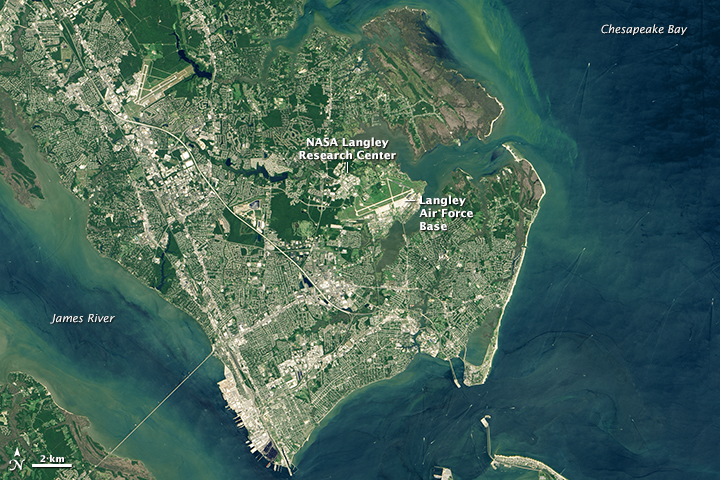 Situated near the third largest seaport in the United States and the nation’s largest naval base (Naval Station Norfolk), NASA’s Langley Research Center has to fight both rising seas and sinking land. Scientists have found that sea level around the Chesapeake Bay has been rising at 0.13 inches (3.4 millimeters) per year, twice the global average of 0.07 inches (1.7 mm) per year. Studies have shown that the landforms around the Chesapeake are sinking as a result of processes that started during the last Ice Age.

The combination of rising waters and sinking ground means the Hampton Roads area (Norfolk-Newport News-Virginia Beach) could see 41 to 53 inches (104 to 135 centimeters) of relative sea level rise by the 2080s. That prospect has the leaders of both NASA Langley and the Langley Air Force Base planning to slowly move back from coastal flood zones. Scientists have surveyed the property with airborne lidar, and modelers have looked more closely at future projections for flood-prone areas. Old buildings are being hardened for tougher weather, and new buildings are being sited farther inland. 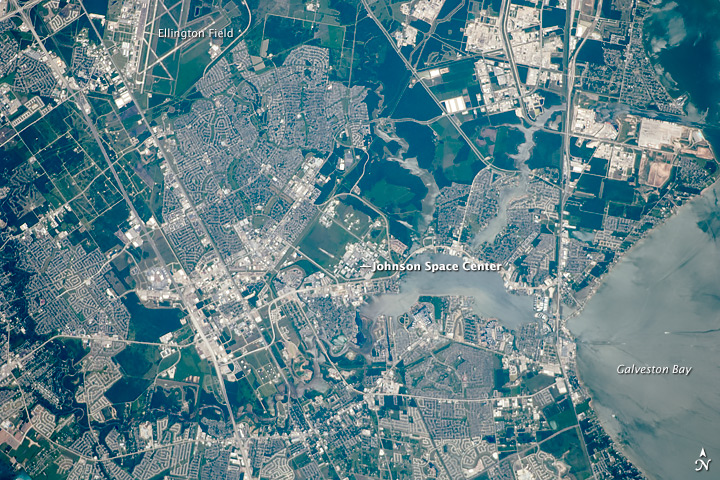 Johnson Space Center lies within some of the most notorious hurricane territory along the Gulf of Mexico coast. The primary NASA center for human spaceflight training and operations is particularly vulnerable to water hazards, including storm surges from hurricanes, flooding from extreme rainfall, and sea-level rise. While these hazards are not new to the Galveston Bay region, many climate change scenarios predict increases in the frequency and severity of such events in an area where sea level rise has been significant. Sea level has been rising nearly 2.5 inches (6.4 centimeters) per decade in Galveston Bay, significantly more than at any other NASA center. 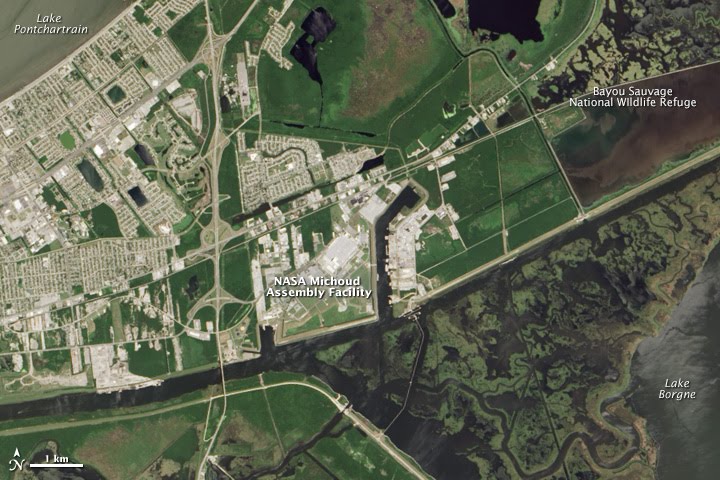 Then there is NASA’s home in New Orleans. Michoud Assembly Facility includes one of the world’s largest manufacturing plants, a 43-acre building where Saturn rockets and space shuttle boosters were once assembled and where the new Space Launch System will be pieced together. Michoud stands below sea level and behind 19-foot-tall earthen levees, and the land beneath the facility is subsiding, a result of the draining and compression of Mississippi Delta swampland. According to a NASA internal study, sea level could rise 30 to 34 inches (76 to 86 centimeters) around Michoud, even under conservative estimates. That’s a much higher water line for Mother Nature to build upon when future hurricanes blow in.