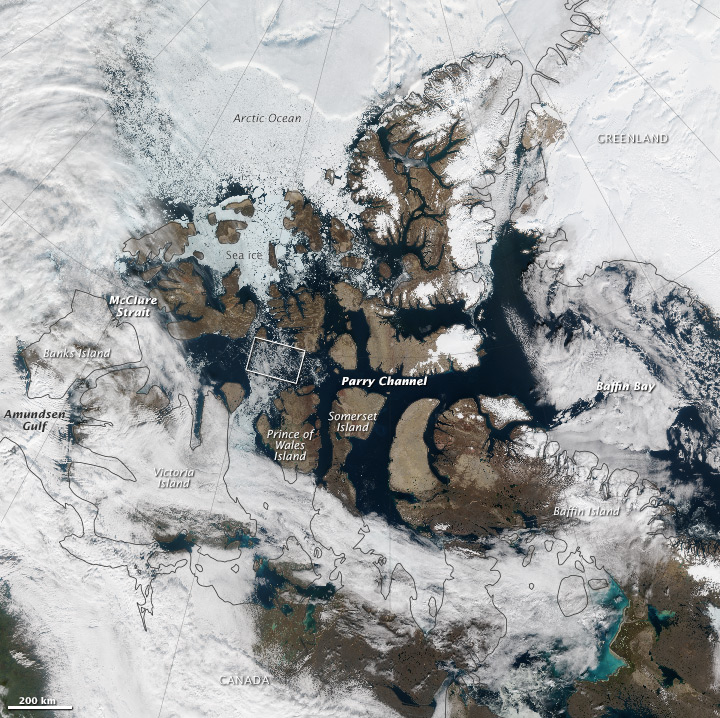 Partial Opening of the Northwest Passage 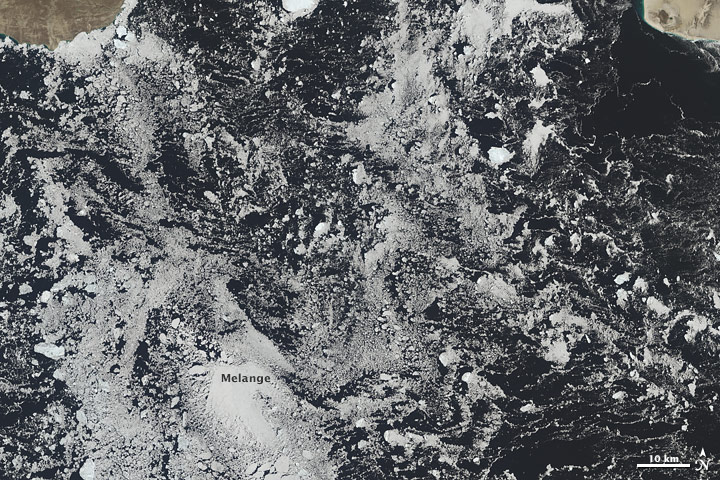 There was a time when the Northwest Passage was a sort of maritime Holy Grail, a route so desired and sought after, but so elusive. For most of the recorded history of North America, the Passage has been nearly impassable and often deadly. But with the modernization of ships and the warming of the Earth, cruising and sailing through the Canadian Archipelago from Baffin Bay to the Beaufort Sea has grown more common and easier. But it’s not necessarily easy.

The top image above shows the Northwest Passage as it appeared on August 31, 2015, to the Visible Infrared Imaging Radiometer Suite (VIIRS) on the Suomi-NPP satellite. The second image was acquired the same day by the Operational Land Imager (OLI) on Landsat 8. The white box on the top image shows the area depicted in the Landsat view. Both images are natural color. Note that much of the white covering the Northwest Passage in the VIIRS image is cloud cover, not sea ice.

The Northwest Passage is a complex, winding maze of sounds, channels, bays, and straits that pass through often ice-choked Arctic waters. Mariners refer to two main routes: a southern passage and a northern passage.

The southern route generally follows the one taken by Roald Amundsen from 1903–1906, when his crew completed the first successful transit through the region. The southern passage goes south of Prince of Wales Island and Victoria Island (and sometimes King William Island) and enters the Beaufort Sea south of Banks Island. It includes several narrow and shallow waterways that are better suited to small ships than large commercial vessels. This southern or “Amundsen” passage has been open for several weeks in the summer of 2015.

The northern passage runs through Lancaster Sound, Parry Channel, and McClure Strait—waterways that are wider, deeper, and more suited to large ships. In the satellite images above, the Parry Channel is filled with a melange of sea ice, though it does not appear to be completely frozen over. According to an August 31 analysis by the Multisensor Analyzed Sea Ice Extent (MASIE) product (created by the U.S. National Ice Center and posted by the National Snow and Ice Data Center) the northern route was considered mostly ice-filled for the sake of navigation. See the MASIE map below. 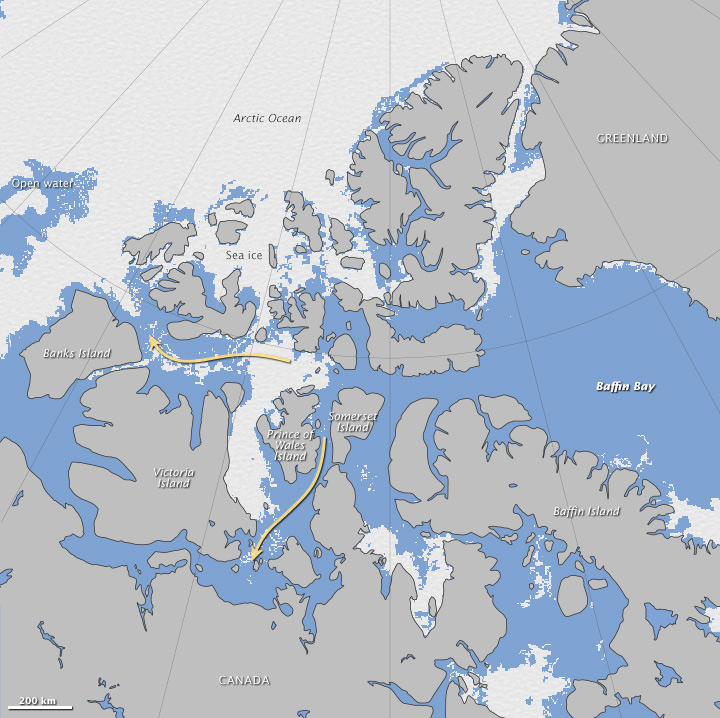 As NASA ice scientists Walt Meier and Claire Parkison note, the opening of the Northwest Passage is not that unusual anymore, particularly along the southern route. However, with the warming of the Arctic and the shrinking of sea ice in the past three decades, the southern passage is now open more often and for longer stretches of each summer. According to Canadian government sources, as many as 30 passages were made as recently as 2012. The number of ships crossing the Northwest Passage has been steadily growing since the 1980s.

But even as Arctic sea ice declines, the opening of the Northwest Passage is not necessarily a sure bet in any given year. “The Northwest Passage does not always correlate with the overall sea ice because it is dependent to some degree on ice drifting into and out of the channels,” Meier said. “You can have a relatively high ice year overall when the passage clears out, and you can have a relatively low ice year—like this year—when the passage still has ice. There is less ice in recent years than there used to be and the passages are more easily navigable than they used to be, but specific conditions from year to year can vary substantially.”

A new paper published in Geophysical Research Letters notes that a warm and mostly ice-free Arctic will not necessarily mean smooth sailing through the Northwest Passage any time soon. The ice that forms in these channels and bays is often some of the thickest in all of the Arctic. That makes it more likely to survive through the summer at a thickness that could harm ships.