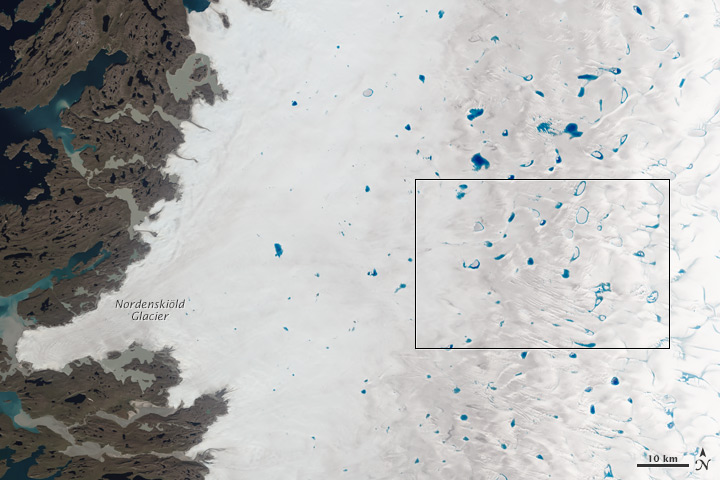 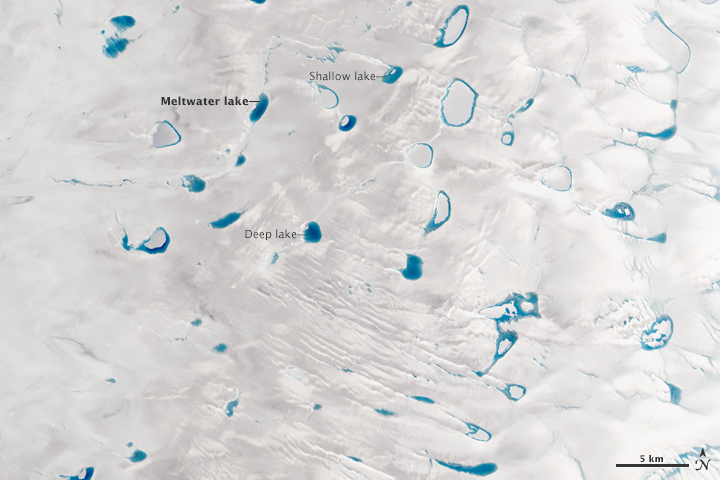 Shades of Blue on the Greenland Ice Sheet

By mid-summer each year, vibrant blue meltwater lakes dot the surface of the Greenland Ice Sheet. These lakes, also known as melt ponds, store a large amount of fresh water throughout the season, and they are an important part of the ice sheet’s surface hydrology.

The images above were acquired on July 15, 2015, by the Operational Land Imager (OLI) on Landsat 8. They show meltwater lakes on the ice near Greenland’s west coast, about 100 kilometers (60 miles) southeast of Ilulissat. Dark debris coats the ice surface in some areas.

“One reason we’re interested in the lakes is because they might be important for speeding up the ice sheet,” said Allen Pope, a glaciologist at the National Snow and Ice Data Center. Once the lakes grow large enough, Pope notes, they can force open crevasses in the ice. The melt water can then move through the crevasse to the base of the glacier and temporarily speed up ice flow across the bedrock below.

Ultimately, the flowing ice will reach one of the many outlet glaciers that line Greenland’s coast. Nordenskiöld Glacier, for example, is visible in the top image. Greenland’s fastest-moving glacier, Jakobshavn, is immediately north of this image. Glaciers like these are the gateway through which ice can exit the ice sheet, enter the ocean, and contribute to sea level rise.

So how large are these lakes? As the bottom, close-up image shows, size varies. Some lakes have a greater surface area than others, but that’s not the only difference. Their depth can vary dramatically too, which becomes apparent in the various shades of blue.

“Intuitively, you see this beautiful blue color, and you know the darker the blue, the deeper the lake,” Pope said while describing an image of the same area as it appeared in summer 2014. “Which is nice, but we want to be able to quantify that.”

According to Pope, some lakes are shallow and lagoon-like, while others are as much as 9 meters (30 feet) deep. Pope and colleagues have been working on a technique to determine the depth of meltwater lakes based on information contained in Landsat 8 images. To do that, they need to know three pieces of information: how much light the water absorbs, how much it scatters, and the reflectance of the bottom of the lake.

With that information, combined with the brightness of the pixel in the satellite image, researchers can assess lake depth. The method is described in a paper under review in the journal The Cryosphere.

The melt water contained in these lakes is extremely clean and supports very little life. “The pure water is the reason we can do this study,” Pope said. “Unknown chemicals and turbidity would render this method much more difficult.”