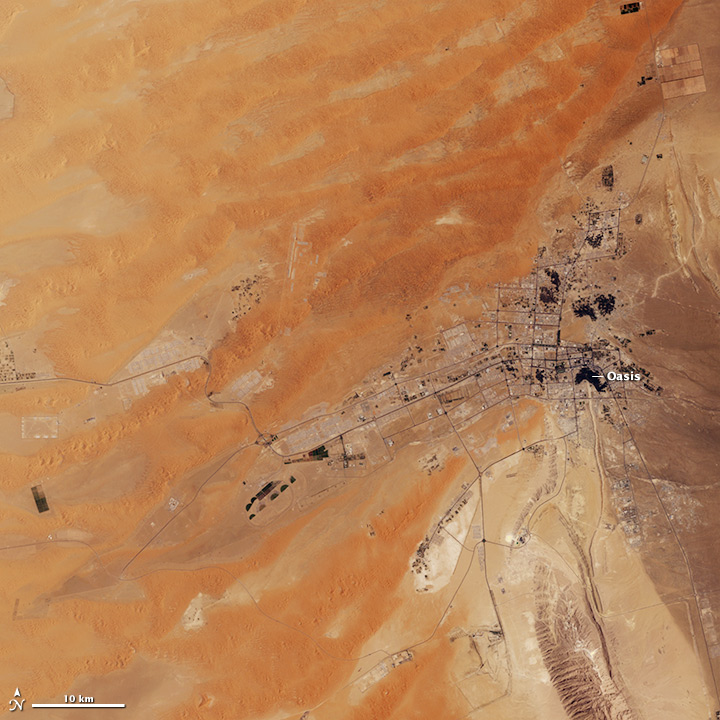 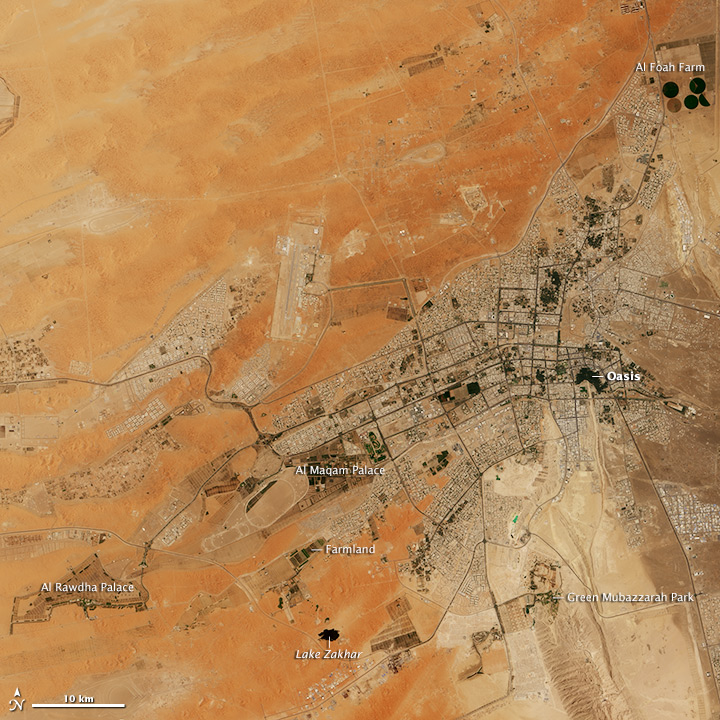 The Greening of Al Ain

In the 1980s, the landscape around Al Ain—a small city in the United Arab Emirates—was dominated by the colors of the Arabian desert: tan, orange, and brown. Three decades later, green is the color that is difficult to ignore.

The Thematic Mapper on Landsat 5 acquired the top image on April 29, 1984. The Operational Land Imager (OLI) on Landsat 8 acquired the lower image on July 24, 2015. Turn on the image comparison tool to slide between the two images.

In 1984, green areas were mostly limited to the large oasis in the historic center of the city. By 2015, several new parks, farms, nature preserves, and palace gardens had emerged, particularly to the south and west of the city. As noted in one recent study, the city now contains 12 million square meters of green space—an average of 32 square meters (344 square feet) per resident, more than any other city in the Arab world. The population has expanded rapidly as well, rising from about 50,000 people in 1975 to more than 630,000 in 2012. The expansion of urban areas—gray in the images—has primarily proceeded westward from the city center due to an abundance of open space and the presence of transportation, water, and power infrastructure.

Green Mubazzarah is one of the most noticeable new green spaces. Located south of the city, at the base of a 1,200-meter mountain called Jebel Hafeet, the park is irrigated by underwater springs. Several other sprawling expanses of green have grown up along the outskirts of the city, including the Al Rawdha and Al Maqam palaces and several farms. One of the largest farms in the city, operated by Al Foah, produces dates on 1,320 hectares.

Although Al Ain’s climate is quite arid, the presence of a large oasis along the eastern edge of the city has made greening the city possible. While most cities in the United Arab Emirates have seen water tables fall significantly as consumption increases, groundwater levels have instead risen in some parts of Al Ain in recent years.

The greening efforts have also been facilitated by abundant oil revenue, and the influence of political leaders committed to the environment. Zayed bin Sultan Al Nahyan, the first president of the United Arab Emirates, is often credited for giving greening projects an extra push in Al Ain. Under Zayed, the city established hundreds of experimental farms, promoted tree-planting, and installed many new parks, according to news reports.