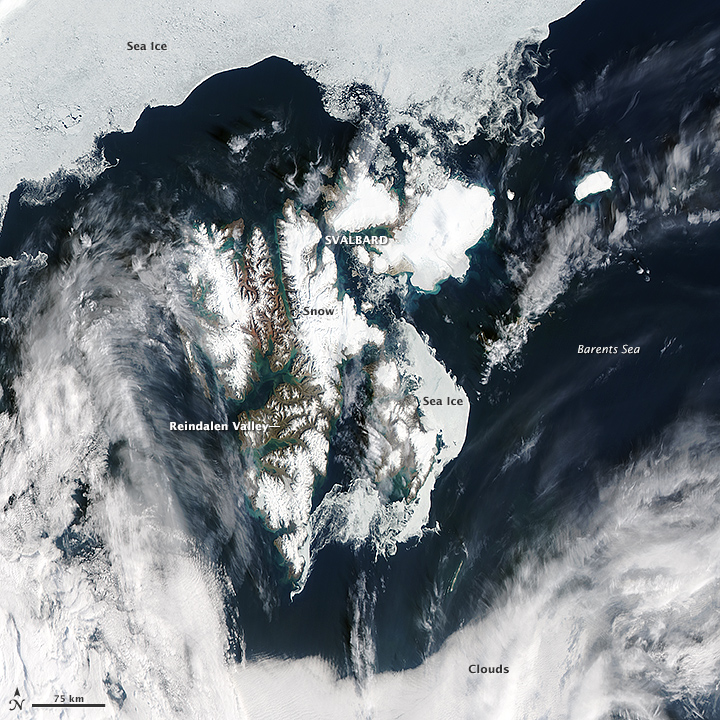 Based on its northerly location—above the Arctic Circle and just 1,300 kilometers (800 miles) from the North Pole—the remote Norwegian archipelago of Svalbard seems like it should be a barren land of snow, ice, and rock. However, the West Spitsbergen Current brings a relatively warm stream of water from the south into the fjords and inlets of western Svalbard. This warm water moderates the climate enough that coastal areas and certain valleys witness an explosion of green in the summer. In contrast, a cool ocean current moving south keeps the eastern coasts of Svalbard’s islands cold and snowy even during the summer.

This image (top), acquired by the Moderate Resolution Imaging Spectroradiometer (MODIS) on NASA’s Aqua satellite, shows the archipelago as it appeared on August 9, 2015. Note how sea ice hugs Svalbard’s eastern coastlines. In western Svalbard, however, dense mats of moss, grass, and flowers emerge in the light-filled days of summer. 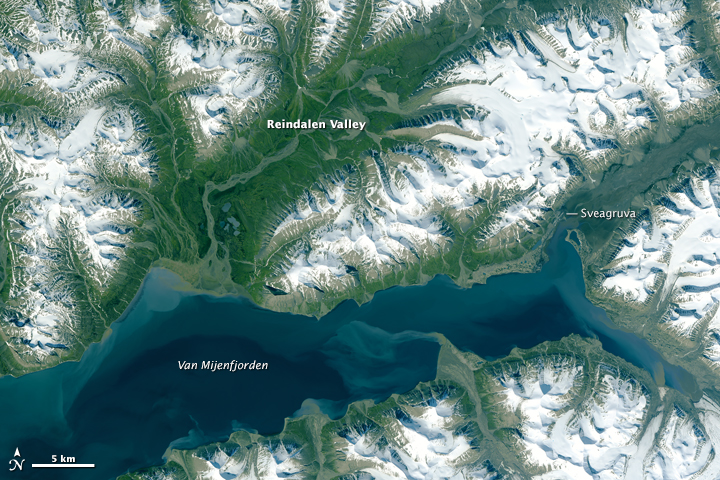 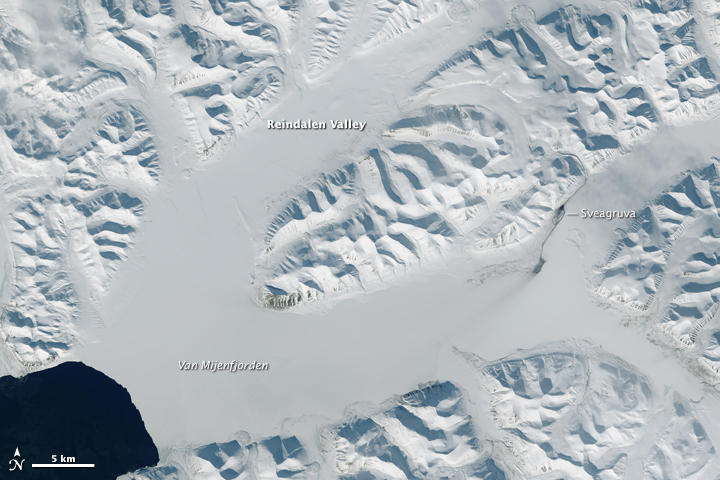 The pair of images above, acquired by the Operational Land Imager (OLI) on Landsat 8, illustrate the dramatic summer greening. The upper image shows the Reindalen Valley on July 9, 2015; the lower image shows the same area on April 29, 2015.

The dark green areas near the lakes in the lower parts of the image are wetlands, which are dominated by Fisher’s Tundragrass (Dupontia fisheri) and White Cottongrass (Eriophorum scheuchzeri). Patches of peat moss, rare in other parts of Svalbard, are also present in the wetlands. The lighter green areas are mostly tundra heath made up largely of Northern Woodrush (Luzula confusa) and Polar Willow (Salix polaris). The gray areas below the snow line are rocky areas with minimal vegetation, though Svalbard poppy (Papver dahlianum) and some other species are present in small numbers. In total, Svalbard is home to 178 vascular plant species, 390 moss species, 708 lichen species, and more than 750 fungi species.

Stein Rune Karlsen, a Norwegian ecologist at Norut Northern Research Institute, has developed a method of monitoring the timing and duration of the summer growing season using satellite observations. In a 2014 study, Karlsen reported that the average onset of the growing season in the Reindalen Valley occurred in June, though there is considerable variability from one year to the next and in different parts of Svalbard. The chart above depicts the timing of the onset of the growing season for a broader area that includes Reindalen Valley and several other valleys in western Svalbard.

Karlsen also found that MODIS detected a slight trend toward a later growing season—a tenth of one day per year, or 1.3 days for the study period. This came as a surprise because temperatures increased 1.46 degrees Celsius (2.6 degrees Fahrenheit) in June and 0.44 °C (0.79 °F) in July over the study period. However, the amount of snowfall also increased over the 14-year period. “The effects on the growth season due to the higher spring temperatures were probably counteracted by the effects of the increased amount of winter snow, which delays the timing of winter snowmelt,” Karlsen explained.

The animation below, provided by Karlsen, uses mean normalized difference vegetation index (NDVI) values in the valley and mean normalized difference snow index (NDSI) values as observed by MODIS sensors. NDVI is a gauge of plant density, productivity, and health that is based on differences in the amount of visible and near-infrared light reflected by plants. Areas with widespread and robust vegetation are shown in green, while areas with some vegetation are yellow. Little or no vegetation is shown with brown. NDSI is a similar index used to distinguish between snow and clouds. In the animation, snow-free land appears brown; snow-covered land is white.