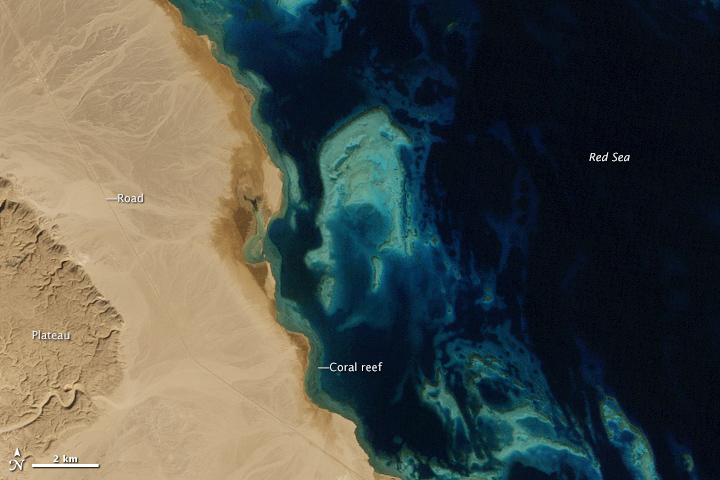 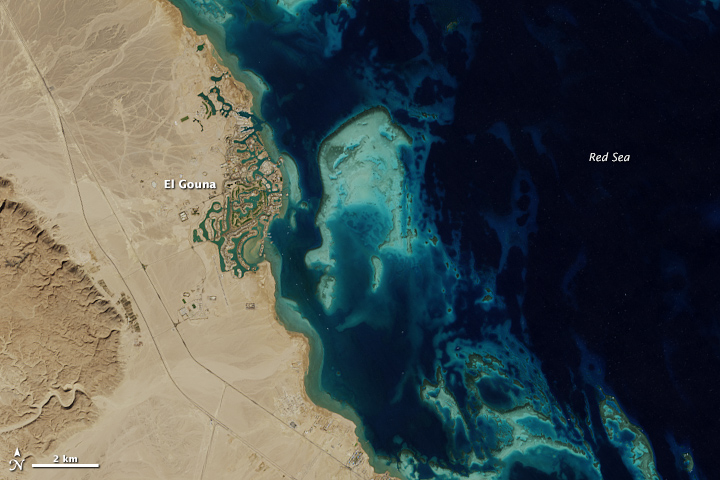 In 1985, sand and coral dominated the Red Sea coast in an area about 30 kilometers (19 miles) northwest of Hurghada, Egypt. Aside from a lone road that ran along the coast, the desert landscape was largely untouched by human activity. Three decades later, development has radically reshaped the coastline.

The construction of El Gouna, a resort town, began in 1989. Building proceeded in waves, with a small cluster of summer holiday homes eventually morphing into a year-round community of about 23,000 people. As of 2015, El Gouna included 16 hotels, some 2,700 villas, 3 marinas, an 18-hole golf course, and hundreds of restaurants and shops.

Developers were not content to simply build on the existing landscape. To give seaside views and easy access to the water to as many El Gouna residents and guests as possible, builders dredged huge amounts of sand from coastal bays and inlets to sculpt the canals, marinas, hotels, and artificial islands of the resort.

While El Gouna has pledged to become a carbon neutral town, the resort has come with a cost for the local environment, particularly the coral reef ecosystems that make the area so appealing. Construction of coastal hotels and other infrastructure often involved the destruction of fringing reefs along the coastlines, caused by the dredging or dumping of large amounts of sediment.

While it is difficult to distinguish between reefs, underwater sand, sea grass, and algae in natural-color Landsat imagery, some scientists have used other wavelengths to track changes in corals near El Gouna and neighboring Hurghada. The findings indicate the reefs may be in trouble. According to one study, corals near Hurghada have declined by as much as 50 percent over three decades.