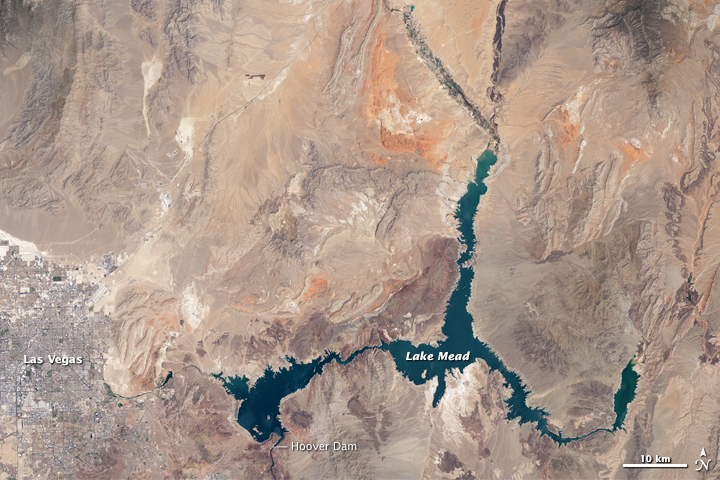 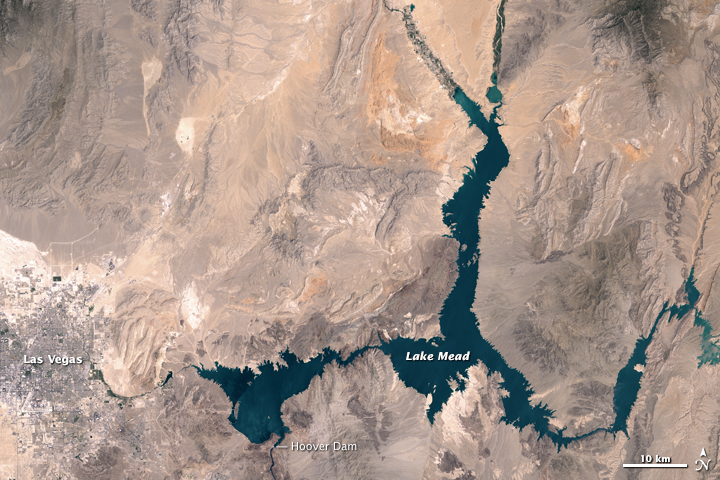 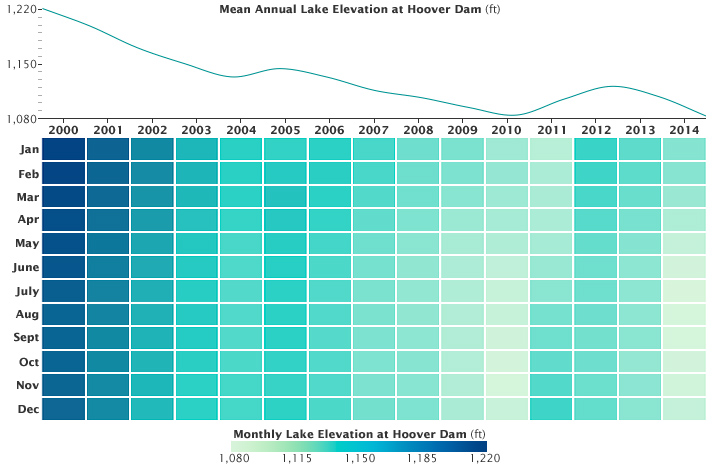 Persistent drought has contributed to the ongoing drawdown of Lake Mead—a large reservoir straddling the Nevada and Arizona border. The decline is visible in these images, acquired 15 years apart with instruments on Landsat satellites.

The top image was acquired July 24, 2015 with the Operational Land Imager (OLI) on the Landsat 8 satellite. The middle image was acquired July 6, 2000, with the Enhanced Thematic Mapper Plus on Landsat 7. During this period, the lake’s elevation (measured near the Hoover Dam), dropped by about 37 meters (120 feet). Turn on the image comparison tool to see how the drop in water level has changed the lake’s perimeter.

Most of the water comes from snowmelt, which travels from the mountains into Lake Powell, through the Grand Canyon and into Lake Mead. Arizona, Nevada, California, and northern Mexico all rely on water from the reservoir. The Las Vegas Valley alone counts on the reservoir for about 90 percent of its water supply.

Comparing the top two images, the lake’s northern branch, Overton Arm, is narrower in 2015. It also appears truncated and stops short of the confluence of the Muddy River (west) and Virgin River (east). The Virgin River Basin, the circular feature once connected to Overton Arm via “The Narrows,” appears dry. According to news reports, low water levels in Overton Arm have made it easier for recreational divers to access a B-29 that crashed there in 1948.

The shorelines of Boulder Basin to the west and Gregg Basin to the east have also changed shape with the water’s decline. But the shoreline is not the only noticeable difference in this image pair; urban areas around Las Vegas have expanded deeper into the desert—continuing a trend visible in a previous series of satellite images that spans a 25-year period starting in 1984.

This is not the first drought to cause a drawdown of Lake Mead’s water levels. The longer-term record shows drops in water elevation associated with a drought in the mid-1950s and again in the mid-1960s. The water level in 2015, however, is part of a decade-long decline, and has reached lows not seen since the 1930s when the lake was first filling.