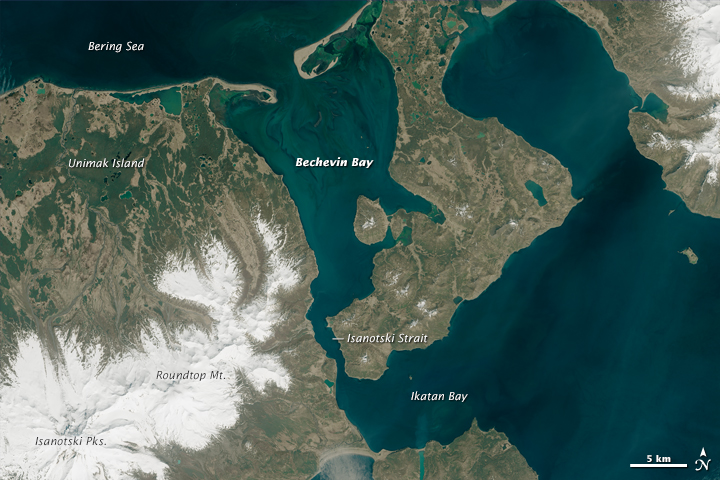 For three ice-free months a year, False Pass provides a shortcut for fishermen making their way between the Gulf of Alaska and the Bering Sea. This easternmost passageway—via Ikatan Bay, Isanotski Straight, and Bechevin Bay—is 70 km (37.8 nm) closer than the next crossing place at Unimak Pass.

But in the Arctic, near-shore changes occur rapidly and can lead to maritime mishaps. The location of sandbars and channels can shift significantly because of the movement and melting of ice, seasonal sedimentation, and erosion. So each year, before vessels start to use False Pass, the U.S. Coast Guard must send out buoy tenders to mark the shifting channels. New remote sensing techniques might make that job easier and more accurate.

Shachak Pe’eri, a researcher at the University of New Hampshire, has pioneered turbidity mapping as a proxy for bathymetric (depth) measurements. In enclosed water bodies with strong currents (such as bays and sounds), turbid channels show up on Landsat imagery. These turbid areas illuminate where currents are carving deeper channels that are safe for boat passage. Pe’eri has been collaborating with colleagues at the National Oceanic and Atmospheric Administration and the Coast Guard to identify some of these areas from space.

The field of satellite-derived bathymetry (SDB) was born with the launch of Landsat 1 in 1972. But it took two changes—the opening of the free Landsat data archive in 2008 and the 2013 launch of the more-advanced Landsat 8 satellite—to reinvigorate the use of satellite data by NOAA and other agencies involved in ship navigation.

In the past, water clarity has been a limiting factor for satellite-derived bathymetry. If waters are too turbid—full of sediments that obscure light reflectance from the seafloor—then bathymetric measurements are difficult to make. But Pe’eri and his NOAA colleagues are thinking outside of the SDB-box by turning turbidity into a tool instead of an obstacle.

“Bathymetry estimated from Landsat turbidity maps can help guide NOAA charting craft when they are mapping the channel each year. This saves time and it makes the process safer,” Pe’eri said. “With insufficient knowledge of sandbar locations, the NOAA craft risk running aground, and crew can be thrown overboard when that happens.”

With the help of Landsat SDB turbidity maps, the new locations of sandbars can be better estimated. Recently this has led to the discovery of a new, straighter, and more geologically stable channel in Bechevin Bay, which was imaged (above) in May 2014 by the Operational Land Imager on Landsat 8.