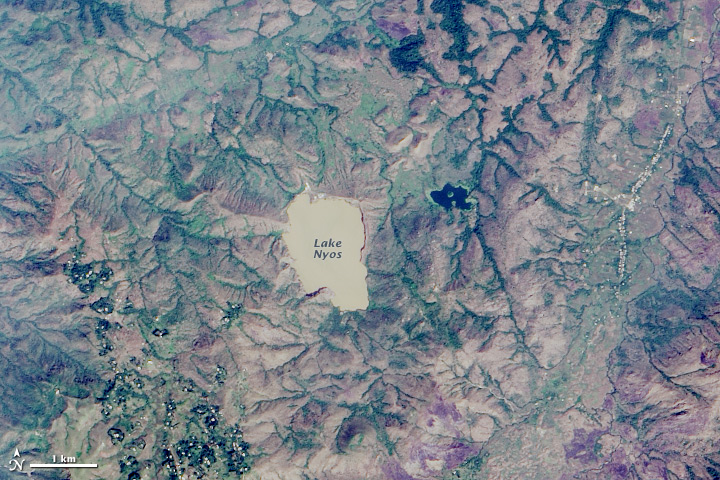 On the evening of August 21, 1986, a silent, invisible killer raced down the hills around Lake Nyos, taking the lives of nearly everything in its path. Scientists would discover months later, after much research, that a cloud of carbon dioxide rose out of the lake and rolled into a valley below at more than 100 kilometers (60 miles) per hour. The suffocating gas killed nearly 1,800 people, 3,500 livestock, and countless birds and insects.

Located in northwestern Cameroon, Lake Nyos sits in a crater on the edge of an inactive volcano in the Oku Volcanic Field. A pocket of magma lies 80 kilometers (50 miles) below the surface. Carbon dioxide from that magma slowly percolates through Earth’s crust with the groundwater and accumulates in the bottom of the lake. Eventually the gas becomes too concentrated and a bubble of CO2 bursts from the lake.

The natural-color image above shows Lake Nyos as it appeared on December 18, 2014. The image was acquired by the Operational Land Imager on the Landsat 8 satellite. Though it is impossible to know for sure from this image, it is possible that the small white dots are villages and settlements amidst the forests and brown, volcanic hills.

Lake Nyos sits high in a volcanic plain amidst the Cameroon line of volcanoes, which stretches into the Gulf of Guinea. The chain acts as a natural boundary between Nigeria and Cameroon. The lake itself fills a circular maar, formed when groundwater meets hot lava or magma and explodes. The hole from the eruption eventually fills with water, forming a crater lake. Geologists believe the Nyos maar formed about 400 years ago, though the area has been volcanically active since the South American and African tectonic plates split some 110 million years ago.

Despite the inherent dangers of living so close to active volcanoes and dangerous lakes, roughly 10,000 people populate the area. The soil on and around the old volcano is rich and fertile, and even after the 1986 disaster people were eager to return to it.

The unpredictable and dangerous nature of the lake led scientists from around the world to propose solutions that would prevent another carbon dioxide eruption. In 2001, French scientists installed a degassing instrument—mostly a pipe and fountain that allows gas to escape at a consistent rate. Two more pipes were installed in 2011. Scientists have also investigated other African lakes to see if the same phenomenon is possible elsewhere.