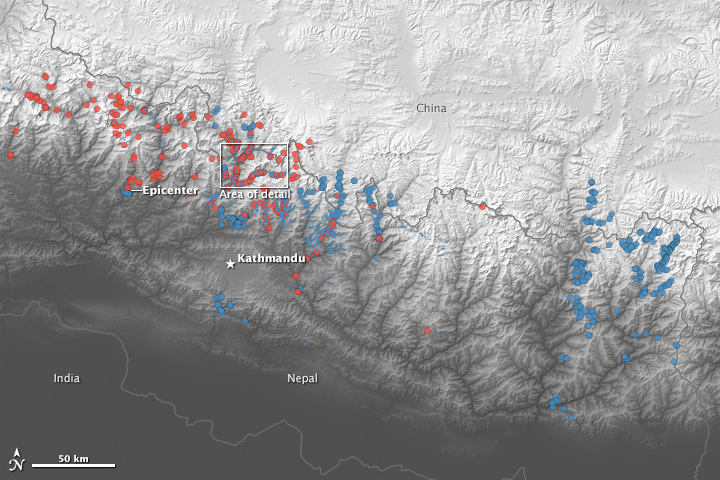 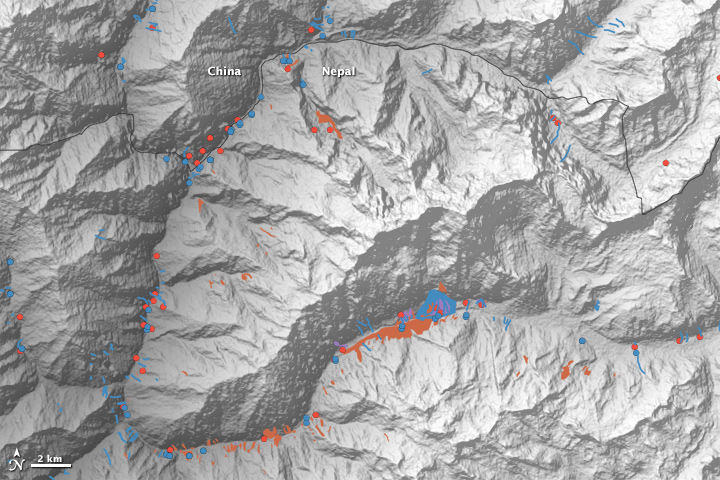 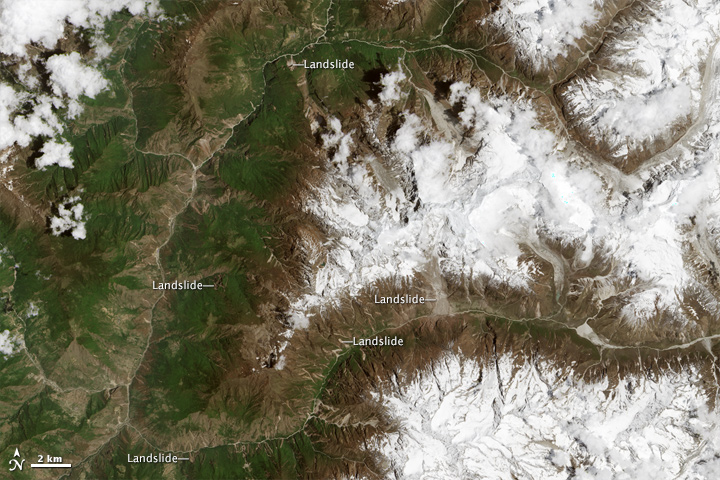 As millions of people regroup from earthquakes in Nepal, a team of international volunteers is combing through satellite imagery of the region to identify additional hazards: earthquake-induced landslides. “Landslides are a common secondary hazard triggered by earthquakes or rainfall,” said Dalia Kirschbaum, a remote sensing scientist at NASA’s Goddard Space Flight Center and a leader of a landslide mapping effort. “Because landslides can mobilize and move so quickly, they often cause more damage than people realize.“

As part of a disaster-relief response to the 7.8-magnitude Gorkha earthquake and its aftershocks, Kirschbaum and Jeff Kargel, a glaciologist at the University of Arizona, are organizing a group of volunteer scientists to identify where and when landslides have occurred in earthquake-affected areas of Nepal, China, and India. From April 25, the date of the first earthquake, to May 20, the team has collectively mapped nearly 1,000 landslides. Different subgroups have focused on disaster mapping, measurement and assessment, hazard impact, or communications. Some teams create damage proxy maps that tell the type and extent of the existing damage; others create vulnerability maps that show potential risks.

Kargel helped form one landslide-mapping subgroup—the “induced hazards” team—in order to identify hazards triggered by the earthquakes and to help guide relief efforts. He found nearly 40 volunteers by reaching out to a NASA-supported network called Global Land Ice Measurements from Space (GLIMS). “It’s stunning to see the level of commitment, passion, and forensic skill the volunteers are bringing to these tasks,” said Kargel. “There are no words to describe this sense of mission that goes way above the scientific call of duty.“

Mapping landslides is especially important because of the impending monsoon season. The highest number of landslides occur during the rainy months between June and October, Kirschbaum noted. In general, if the land has slid in a specific area, it will have a higher likelihood of experiencing another landslide because the ground is unstable and more susceptible to environmental triggers like heavy rain. In the aftermath of the Gorkha earthquake, researchers are concerned that landslides will be even more frequent this year.

The landslide mapping effort includes researchers from Nepal, the United States, Canada, the United Kingdom, China, Japan, Australia, and the Netherlands. The collaborators provided information that Nepalese government, military, and scientific entities could use to make informed decisions about evacuations and relief support.

The two maps at the top of this page plot the locations of landslide events and hazards. Colors represent the teams that found or are studying them. ICIMOD (red) stands for the International Centre for Integrated Mountain Development, an institution focused on improving the lives of people in the Hindu Kush Himalayan region. ICIMOD also serves as a regional hub for SERVIR, a joint initiative by NASA and the U.S. Agency for International Development. Both Kirschbaum and Kargel are members of NASA’s SERVIR Applied Sciences team.

The mapping effort will have a long-term benefit, as well. “How can we better understand landslide processes scientifically,” Kirschbaum asked, “and then how can we use models, weather forecasts, and other tools to help government and science entities protect citizens?”

The NASA-sponsored team is using satellite images to identify landslide locations, to characterize additional hazards (for example, dammed lakes), and to incorporate other useful information such as locations of nearby villages. Data sources include the Landsat satellites, the Earth Observing-1 satellite, the Advanced Spaceborne Thermal Emission and Reflection Radiometer (ASTER) instrument on the Terra satellite, the WorldView and GeoEye satellites operated by Digital Globe, and image mosaics and topographic information accessible in Google Earth. As an example, the third image above is a natural-color view of the study area that was acquired by Landsat 8 on June 1, 2015.

A U.K. mapping team (blue dots on the map) consists of scientists from the British Geological Survey (BGS) and Durham University. Like their NASA-sponsored colleagues, they are identifying landslides using satellite data from various sources and building a database for future study and for relief efforts.

Researchers in Nagoya University (NGA; purple on the map) in Japan have identified more than 600 potential earthquake-induced landslides. An independent, Canadian-based group—MacDonald, Dettwiler and Associates Ltd. (MDA)—has been locating landslides and potential landslides by analyzing areas before and after the earthquakes using data from RADARSAT-2 (orange-brown on the map), an Earth-observing satellite from the Canadian Space Agency.

“There has been a lot of different people in the mix, which is both exciting and challenging,” said Kirschbaum, “but I think it sets a new precedent for what is possible when you are dealing with such a huge humanitarian crisis.”