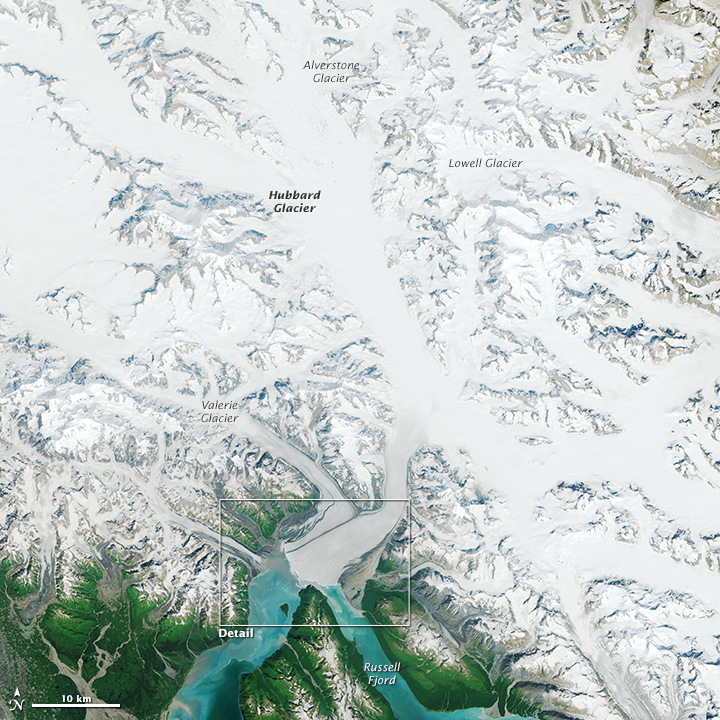 The Advance of Hubbard Glacier 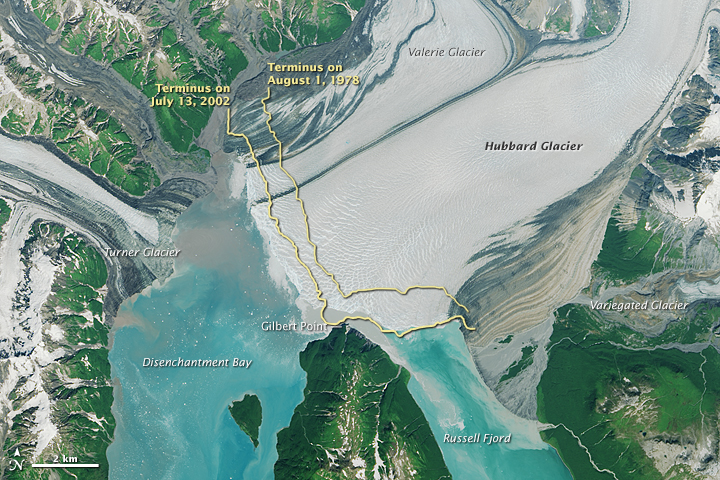 Since measurements began in 1895, Alaska’s Hubbard Glacier has been thickening and steadily advancing into Disenchantment Bay. The advance runs counter to so many thinning and retreating glaciers nearby in Alaska and around the world.

The image above, acquired by the Operational Land Imager (OLI) on Landsat 8, shows Hubbard Glacier on July 22, 2014. The second image shows a close-up of the glacier’s terminus on that day. Yellow lines indicate the location of the terminus on August 1, 1978, and on July 13, 2002.

According to Leigh Stearns, a glaciologist at the University of Kansas, Hubbard’s advance is due to its large accumulation area; the glacier’s catchment basin extends far into the Saint Elias Mountains. Snow that falls in the basin either melts or flows down to the terminus, causing Hubbard to steadily grow. In addition, Hubbard is building up a large moraine, shoveling sediment, rock, and other debris from Earth’s surface onto the glacier’s leading edge. The moraine at the front gives the glacier stability and allows it to advance more easily because the ice does not need to be as thick to stay grounded. (If it is thin, it can start floating and will not necessarily advance.)

Twice in the past hundred years—in 1986 and again in 2002—the moraine has made contact with Gilbert Point and blocked the entrance to Russell Fjord. With nowhere to drain, runoff caused the water level in the fjord to rise rapidly.

The image below, acquired on July 13, 2002 by the Enhanced Thematic Mapper Plus on Landsat 7, shows the glacier the last time that it sealed the fjord. Water levels to rose 0.24 meters (0.8 feet) per day. However, the closure was temporary, as water pressure overpowered the encroaching ice and debris and burst through the natural dam, returning the fjord to normal levels. 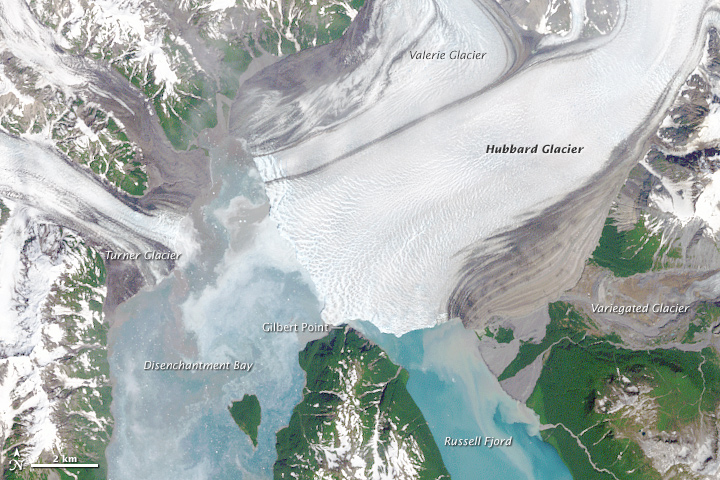 In 2002, Stearns was attending a glaciology conference in nearby Yakutat, Alaska, a town that depends on Russell Fjord’s marine life. “Understanding Hubbard’s behavior is scientifically interesting,” Stearns said, “but it also has immediate consequences for the town of Yakutat.”

Those consequences provoked her to investigate what controls the terminus position and its advance, and to estimate when the fjord might become permanently blocked. The findings, recently accepted for publication in the Journal of Geophysical Research, explain how the mechanics at the terminus override the influence of other climate fluctuations.

One estimate suggests that the fjord could permanently close by 2025. But Hubbard’s terminus is nearly 14 kilometers (9 miles) wide, and does not advance at the same rate across its entire width. The region adjacent to Gilbert Point, where the closure would occur, advances more slowly because seawater passing through the gap constantly erodes the ice. Based on the current rate of advance at the gap, Stearns estimated that closure could occur by 2043. Stearns cautions, however, that these closure dates are “projections based on our current observations, and should be viewed with skepticism.”