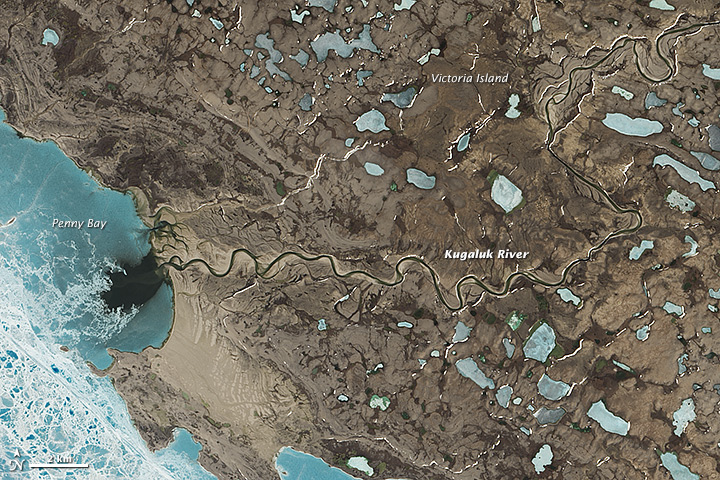 The landscape of Canada’s Victoria Island reveals a long history of glaciation, most recently by the Laurentide Ice Sheet during the last Ice Age. On June 21, 2014, the Operational Land Imager (OLI) on Landsat 8 acquired this image of the Wollaston Peninsula on the island’s southwest side.

Hills on the north-central part of the island (not pictured) rise as high as 500 meters (1,600 feet). However, most of the features that were sculpted by the ice are located in the surrounding, relatively low-lying areas. These scoured landforms, moraines, and glacial deposits often dictate the locations of lakes and the paths of rivers.

The Kugaluk River, centered in this image, meanders across the Wollaston Peninsula to Penny Bay. South of the river’s mouth, light brown areas are tidal deposits that contain silt, sand, gravel, and clay.

Penny Bay remains ice covered into the summer, before beginning an annual ice retreat. When ice on the bay and the adjoining Dolphin and Union Strait is thick, caribou take the opportunity to migrate across the strait between Victoria Island and the Canadian mainland.